In the basement of a Burke Mountain home, Tri-City moms Genevieve Kyle and Heather Fox show the room where they conduct their interviews for ParentTalk.
Feb 6, 2018 11:47 AM By: Janis Cleugh 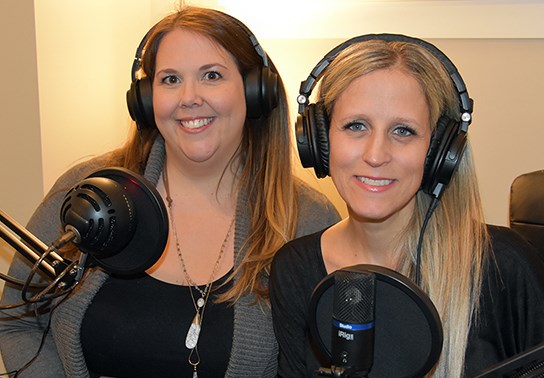 UPDATE: The Parenttalk episodes will be released on Mondays.

In the basement of a Burke Mountain home, Tri-City moms Genevieve Kyle and Heather Fox show the room where they conduct their interviews.

Since October, the pair has invited more than two dozen professionals — mostly from the healthcare field — to sit down in the studio to talk about parenting-related issues.

And, so far, they’ve banked about 60 shows via their ParentTalk podcast, of which the first episode (The Power of Play) went live last Wednesday.

This week’s episode, released tomorrow (Wednesday), centres on injury prevention with Holly Choi with conversations about child safety gates, baby-proofing a home, and how to safeguard your kids against burns, drowning and poisoning, among other things.

Their podcast idea sprung from a Facebook group that Kyle launched about two years ago, called Maman’s Group, a social network for parents. She invited fellow new moms for get-togethers at her Coquitlam home to connect and learn.

“I thought it was a shame to have all these women and and experts in this group and not be able to share their tips with the rest of the world,” said the Granby, Que., native who moved to B.C. in 1997 without knowing the English language.

The group, now 150-members strong, encouraged Kyle to start a parenting-focused podcast; in turn, Kyle recruited Fox, a Terry Fox secondary grad (class of 1995) who at the time was a franchise owner of Gymboree Play and Music.

With the support of their husbands, who also took care of their sons — Fox’s Hudson, now 14 months, and Kyle’s Alexandre, now 16 months — while their wives were in the studio, they recorded 30- to 45-minute talks with their chosen guests.

Fox stressed not all the discussions are geared for moms. “There’s a lot for dads, too,” she said, citing an upcoming episode about male infertility.

Kyle said they built up their inventory quickly not only to accommodate their experts’ schedules but also to ready for a busy time later this year: Kyle and her hubby are expecting another son, around the start of the summer.

Kyle said the late nights of researching and editing their shows via Garage Band, over the past four months, have been hard work but also enlightening. While much study is done in advance, Kyle and Fox, who also has a background in public speaking, haven’t always followed their long list of questions for the professional in front of them.

Rather, “we want an organic discussion,” said Fox, a Port Coquitlam resident. “We want to talk from the heart and make that connection. It’s been an amazing journey and we’re so happy to be spreading information with other parents.”