Up close with the Moodys

Letters from and photographs of the Moodys — the namesake of Port Moody — are now on display at the Port Moody Station Museum.
Oct 24, 2017 9:30 AM By: Janis Cleugh 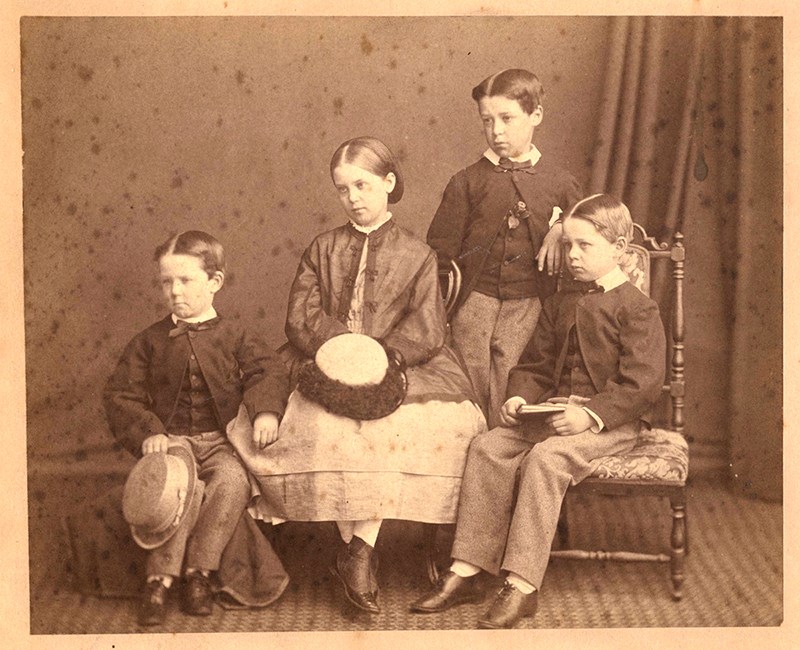 It is believed these are the four elder Moody children who accompanied their parents, Col. Richard Moody and his wife Mary, from England to B.C. in 1858. This pictured was taken around 1865 and is now on display in Port Moody. In total, the Moodys had 13 children: Josephine, Richard, Charles, Walter, Susan, Mary, Margaret, Henry, Grace, Gertrude, George, and twins Ruth and Rachel who died in 1870.Image A-01725/Courtesy of the Royal BC Museum and Archives

These are the four children of Col. Richard and Mary Moody who, in October 1858, boarded a ship in England to make a eight-week trip to New York, around the tip of South America, and onto San Francisco and Victoria for their father’s work.

The family arrived on Vancouver Island on Christmas Day that year after Moody was appointed Chief Commissioner of Lands and Works — as well as the first lieutenant governor — for the new colony of British Columbia.

At the time, the BC gold rush was in full swing and B.C.’s governor James Douglas needed military support from Moody’s Royal Engineers to control the unruly miners and to survey and build infrastructure with his Sappers.

But while Moody’s accomplishments in B.C. are well documented and public, the personal letters from his wife — to her mother and her sister, Emily Hawks, in England — offer a different take on how the immigrants coped in their new land.

According to the 42 letters penned by Mary Moody from their visits to various colonies in the British Empire — including from B.C. between 1858 to ‘66, which are part of a Royal BC Museum collection — she longed to return to England.

In her first letter to her mom, on Dec. 25, 1858, which can be seen until Nov. 25 at the Port Moody Station Museum as part of a new exhibit called Meeting the Moodys, Mary Moody starts off on a positive note about their arrival with their four young children.

And Gov. Douglas, she writes later, “is a very polite, agreeable sort of man. He and Richard will, I trust, get on well.”

Two months later, however, her tone is changes. The weather is cold, her children are sick and her husband is preoccupied. Mary, too, is overwhelmed with entertaining dignitaries and Douglas is described as a “dilly dallier.”

By Jan. 2, 1860, when the family is now living in New Westminster, Mary Moody is despondent. “Our plans are still as ever,” she writes to her mother. “Indeed, I never think about the possibility of our returning home. It is too good to be true.”

The three letters as well as portraits of the couple, taken in 1865 (a year before they left B.C.) and 1870, are enclosed in a glass case on loan from the Royal BC Museum in Victoria.

But also on show is the reason why the display exists: a photo album belonging to Mary Moody that includes some of the earliest personal snapshots on record.

As both Col. Moody and Mary came from wealthy families — and he maintained a high-rank in the military service — they were able to obtain a camera that captured highlights of their trip to France, Switzerland and Germany after they wed.

That 52-page photo album was won by the Royal BC Museum in an online auction in December 2013; it was put on the block by an elderly man who had been with the Royal Navy in the U.K. and discovered it in a flea market in the 1970s.

Of the 90 or so images in the book, which was also sought by the cities of Port Moody and New Westminster, there are also some of the earliest photos of First Nations people on the west coast — two of which curator Hilary Letwin displays on a digital platform for visitors to the Station Museum.

As well, Letwin has included in the exhibit a pencil drawing of the Moody’s home in New Westminster, done by their neighbour and fellow British ex-pat Sarah Crease. (Crease was the wife of B.C.’s attorney general Henry Pering Pellew Crease and she was a gifted artist who had taken private art lessons in England from noted portraitist Charles Fox and illustrator Sarah Anne Drake; her letters — as well as Mary Moody’s — offer insight into B.C.’s colonial and post-Confederation elite immigrant society.)

Letwin also exhibits a replica uniform and hat, from 1975, similiar to what Col. Moody would have worn as he founded B.C.

Letwin, who was recruited by the PoMo Heritage Society in March as a guest curator, said the nine artifacts borrowed from the Royal BC Museum give an intimate look at how Mary Moody struggled in a foreign, rural territory with seven children.

Her letters home “are personal and poignant. She is a resourceful, strong and witty woman,” Letwin said. “The exhibit is really about Mary Moody.”

Letwin said she can relate to Mary Moody as she, too, has a young family.

“I didn’t know much about Mary Moody prior to this process,” she said. “When I first sat down in May and read the transcripts [from the letters], there are so many aspects to motherhood that she talks about, which is important to me as I have young children. Reading her letters… it’s literally like having a conversation with a friend.”

Letwin said she’s especially excited to share the exhibit with students, and invites teachers to escort Port Moody youth on field trips to the museum. “It’s important for them to become familiar with local historical figures.”

• Two talks are lined up for Meeting the Moodys: Letwin leads “Making Memories: A History of Souvenir Albums” on Oct. 29; and, on Nov. 5, Jacqueline Gresko discusses the topic “Windows on the Past: Mary Moody’s letters on life in the Royal Engineer Camp 1859-1863.” The museum (2734 Murray St.) is open Wednesdays to Sundays, noon to 4 p.m. Call 604-939-1648 or visit portmoodymuseum.org.