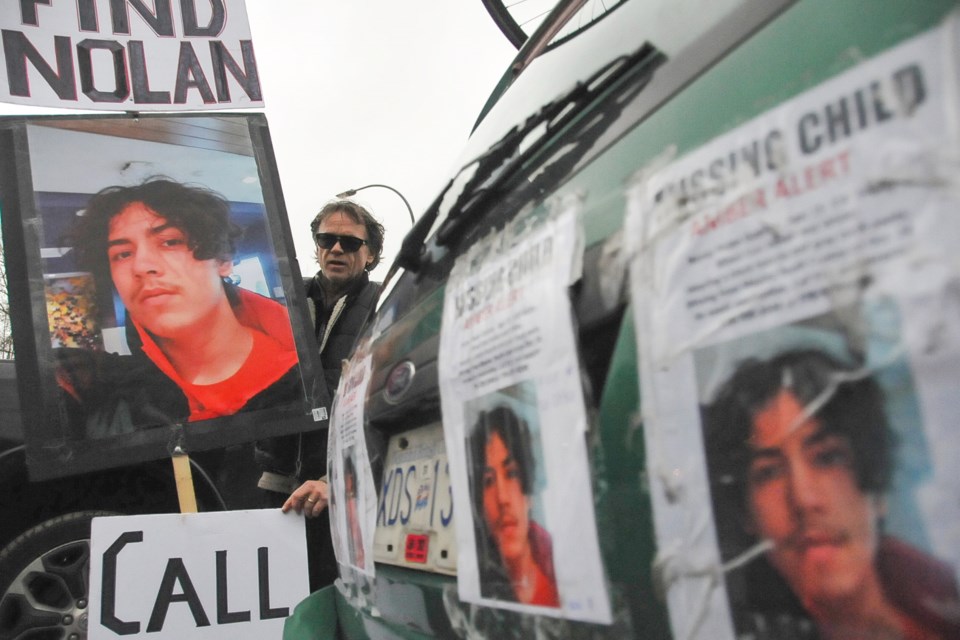 A 15-year-old who went missing from a Coquitlam adolescent care centre was found on Vancouver Island Saturday after 22 days of searching.

For the next 22 days, Godron’s father lived out of a green station wagon, searching for his youngest son across Metro Vancouver.

“I’ve been on both sides of the river. I’ve put up posters along the train lines, at malls, given them to city workers, taxi drivers,” he told the Tri-City News Friday. “I’ve gone to homeless camps, walked along riverbanks… sometimes I ride my bike to cover more ground.”

But after three weeks of canvassing every neighbourhood across Metro Vancouver, scouring parts of Vancouver Island and beyond, Coquitlam RCMP has handed the case to its Major Crimes Unit.

That’s when Timmins decided it was time to change his strategy. On Saturday, Nov. 14, the father stood at the intersection of Lougheed Highway an Orchid Road, the last place his son had been seen. "Find Nolan. Call 911,” read the signs over an image of Godron’s face.

Just over two hours later, Timmins said he got a call from the Coquitlam RCMP: Godron had been found in Saanich on Vancouver Island.

Coquitlam RCMP was not immediately available to verify Godron's condition, but in a press release confirmed he had been found.

For Timmins, the news is only just sinking in.

“I haven’t even downloaded this yet,” said Timmins shortly after he found out his son was alive.

1965
‘What are they waiting for?’ asks Coquitlam parent worried about long wait for school isolation letter
1531
New garden centre hopes to take root in Port Moody
1526
Parent says Port Moody minor hockey not giving a full account of its COVID cases
1446
Every Canadian household to get free, pre-paid postcard
1114
Dentists, midwives and more approved to assist in B.C. vaccination clinics