Son working with Alberta researchers on an app for when people with dementia go missing, but a province-wide system still recommended
Sep 17, 2018 9:46 AM By: Diane Strandberg 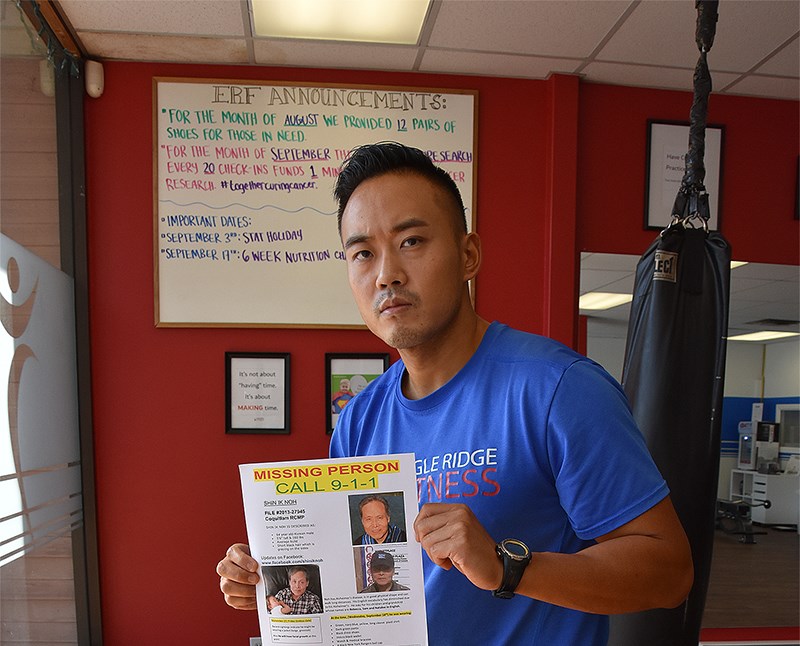 Sam Noh with a poster from five years ago when his father, Shin Noh, went missing from his home in Coquitlam on Sept. 18, 2013. Noh is continuing to advocate for a Silver Alert that would notify the public through radio, television and wireless devices when an elderly person with dementia goes missing.Diane Strandberg

Five years have passed and not a day goes by without Sam Noh thinking about his father.

Shin Noh went missing from his Coquitlam Sept. 18, 2013 and his family is still seeking closure because the elderly pastor was never found, despite a huge community effort.

“I try to remember the happy moments,” Sam Noh told the Tri-City News in an interview at his fitness studio in Port Moody.

Indeed, Noh, 37, says he has a lot to be grateful for — from his marriage two years ago to his recently expanded business. As well, Noh says he appreciates how the community rallied around his father five years ago, participating in the search and helping to keep track of sightings.

But there have been challenges along the way and Noh is speaking out now because he doesn’t want other families to suffer the trauma and grief his family has experienced.
“It would give me some comfort for another family not to go through what we went through, that would be a comfort,” Noh told The Tri-City News.

“Around this time emotions are high and there’s a sense of disappointment that it hasn’t been accomplished."

That's why he’s advocating for a province-wide Silver Alert program that would notify the public when elderly people with dementia go missing. Based on the current Alert Ready program tested recently to warn people about a tsunami, a Silver Alert would alert people in the immediate area where the missing person was last seen.

There has been a petition advocating such a program and Coquitlam-Maillardville MLA Selina Robinson launched a private member’s bill for Silver Alert when the NDP was in opposition in Victoria. But as yet, there has been no progress and Noh fears families whose loved ones have dementia are at risk without such an emergency alert system.

Without a government-sponsored program, community members and advocates have stepped in with their own alert systems, and Noh said he welcomes these efforts to keep people with dementia safe.

For example, the BC Silver Alert system developed by Coquitlam Search and Rescue's Michael Coyle has been sending out RCMP missing people alerts for about four years while an Alberta research team is working on an app that would enable caregivers to get their loved ones' information out to the public quickly and efficiently when the elderly person goes missing.

Community ASAP or C-ASAP is being tested in Coquitlam next month and Noh believes it is a promising system.

“It’s a voluntary subscription and you put in what radius you want to receive alerts.”

When an individual goes missing, their caregiver can issue an alert on the platform, which includes the person’s last known location. Police can use this information to issue a missing person alert over traditional channels.

Volunteers who have pre-registered can report sightings that may help authorities locate the person.

Noh said such a program could have helped his family because there were sightings of his dad that weren’t reported until a few days after Shin Noh went missing.

“You need to be able to communicate this data and provide updates,” Noh said. "Time is of the essence.”

In the years since Shin Noh went missing, his family has come together over their grief but have yet to hold a memorial. They will be holding a family gathering this weekend and Noh acknowledges that in two more years, his father will be officially declared deceased and a funeral will likely be held.

If there is any silver lining, he said, it’s that people are more aware about Alzheimer’s and dementia, and efforts to make the Tri-Cities a dementia-friendly community are welcome, something Noh says his family has come to appreciate because initially they were uncomfortable about letting people know about their father’s condition.

“I want to keep this in the public mind,” Noh said. “This issue isn’t going away — the stats say it’s a growing problem.”