The checks were conducted last week at high volume transit hubs across the system. In total, about 31,000 were included in the checks.
Sep 2, 2020 12:47 PM By: Stefan Labbé 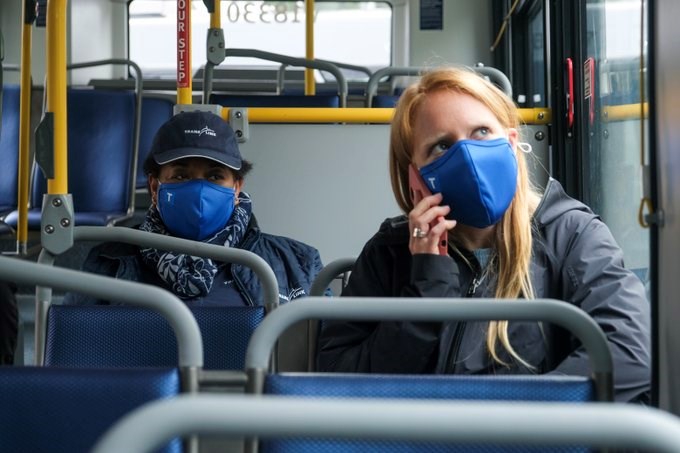 TransLink says it will be mandatory to wear a non-medical mask or face covering on transit as of Aug. 24.TransLink / Twitter

A strong majority of Metro Vancouver’s transit riders have been complying with TransLink’s mandatory mask policy.

That’s according to the results of recent spot checks carried out by the regional transit authority, which found roughly 92% of riders wearing masks aboard buses, SkyTrain and Seabus.

The checks were conducted last week at high volume transit hubs across the system. In total, about 31,000 were included in the checks.

In a press release, TransLink CEO Kevin Desmond described the results as “a very encouraging trend” indicating the authority’s mask protocols are succeeding.

“I’m pleased to see our customers are helping us make transit safer for the thousands of people who rely on the system every day,” he said.

While Transit Police have been empowered to enforce the wearing of non-medical masks or face coverings across the transportation system, a spokesperson for TransLink wrote that “the initial focus of this policy is on awareness.”

The transit authority isn’t the only organization looking to improve health and safety protocols aboard its vehicles.

Tuesday, Sept. 1, the ride-hailing service Uber announced it would roll out a new mask verification protocol, in which a driver could flag an unmasked customer. That, in turn, would trigger a notification to the customer to take a photo of their masked mug to ensure compliance.