A helping hand needed for stroke victims at ERH 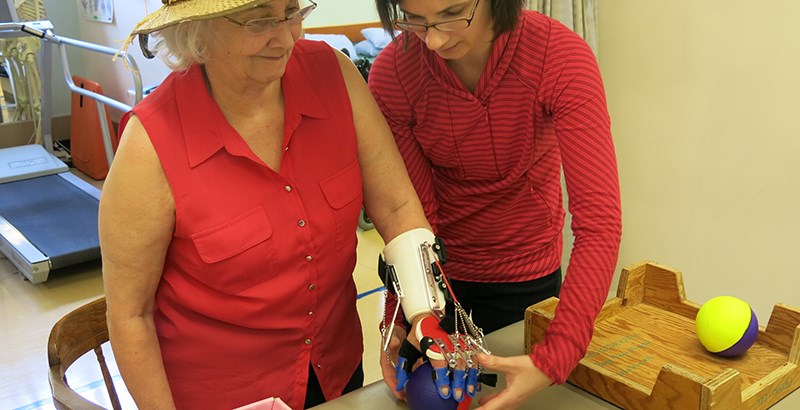 Sharlene Nickel works with Eagle Ridge Hospital physiotherapist Katherine Moreland in developing the strength in her left hand using a Saebo device. ERH Foundation is fundraising to purchase more of the devices and other equipment to help patients recover from a stroke.Eagle Ridge Hospital Foundation

harlene Nickel is a warrior but you wouldn't know it to look at her.

She's 68, has the demeanour of your own kind grandma, loves to knit, bake, garden and play with her grandchildren.

But after a stroke last year that immobilized the left side of her body, especially her hand, Nickel had to fight back with every ounce of strength she had.

And one thing that helped was a special hand strengthener called a SaeboFlex, a piece of equipment that looks like something Iron Man would wear.

A strange glove composed of metal joints and plastic fingers held together with wire tensors, the SaeboFlex gave Nickel the power to fight back against the stroke's effects. It helped her re-wire her brain so she could regain the strength in her hand.

"It was amazing how much difference it can make," said Nickel. "In bed at night, I had no strength to grasp anything. The arm felt like it wasn't even part of my body."

Twice a week at Eagle Ridge Hospital in Port Moody, which has one of two regional rehabilitation centres in Fraser Health, Nickel would get strapped into the device that tilts her wrist slightly and splays her fingers so she could work at flexing her joints.

Eventually, she was strong enough to grasp a ball and, after two months, had enough strength in her hand to do small household tasks.

"I can put my hand around things now, I can open my fingers all by myself with the help from that," Nickel said.

The problem is, ERH only has the device on loan and only in a few sizes for the left hand. The hospital foundation would like to purchase an entire kit at a cost of about $20,327, and other equipment for the rehabilitation unit to make life better for patients.

Marsha Mullen, the hospital's manager for rehabilitation services, says the device is a simple concept but clinical studies have shown the earlier someone receives treatment with the Saebo device, the more function they seem to regain in their arm or hand.

"There is always something new coming out that keeps patients' focus on their goals and maximizing their independence," she said.

For Nickel, who is back home and working hard to regain function on the left side of her body, having hand mobility has improved her life immensely. And while she might not be fighting bad guys like a metal-clad superhero, Nickel can now grasp her bed sheets, open a door or a cupboard, grasp a plate — and even knit.

Her story may not hit the silver screen anytime soon but it's worth telling if the campaign raises enough money so other stroke victims can benefit.

The Eagle Ridge Hospital Foundation is running a summer fundraising campaign to collect money to purchase equipment for the rehabilitation unit. Items needed include:

• Saebo MyoTrac Infiniti Biofeedback — $5,647 (electrical stimulation for patients who have difficulty relaxing or shutting off the spastic muscles)