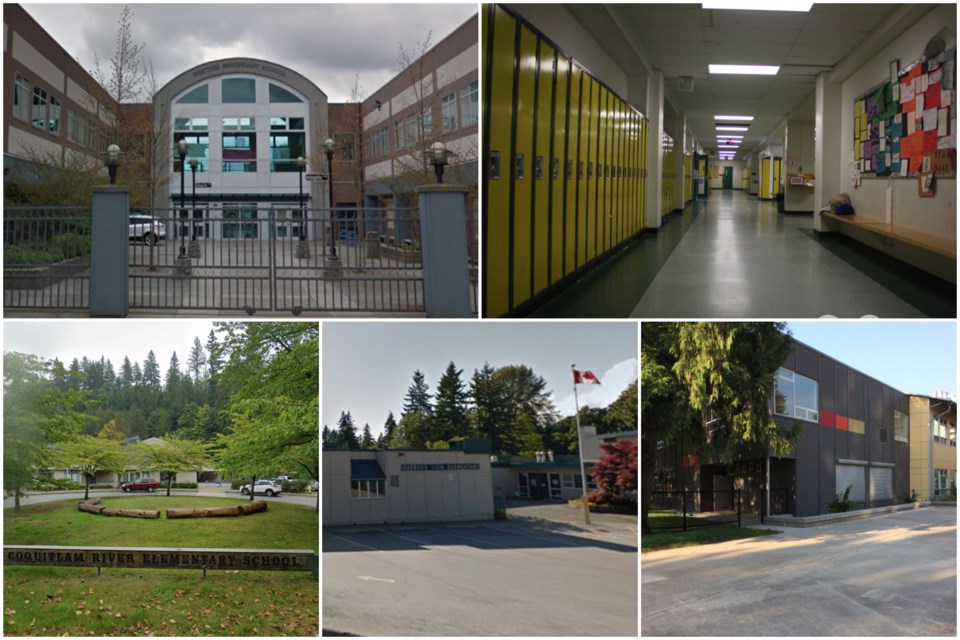 According to the health authority, a school “exposure” indicates a single person with a lab-confirmed COVID-19 infection attended school during their infectious period.

Dr. Bonnie Henry said large gatherings over the Thanksgiving long weekend have led to a spike in cases — including 817 cases, the most ever over a three-day stretch, over the past weekend — and it’s not surprising to see cases showing up in schools.

“We saw it circulating in the community,” said Henry. “We know there’s going to be [cases] inadvertently in the school environment.”

Henry said the COVID-19 school plan is working, and that health officers are able to contact trace to ensure the virus is contained, sometimes using whole genome sequencing to identify the source of transmission.

But Henry also acknowledged that Fraser Health, which includes the Tri-Cities, represents the majority of new cases in the province, and despite the hiring of several hundred new contact tracers, they are facing “a challenging situation.”

“We are now at the verge,” she said, pointing to a rise in transmission of the virus in people’s private homes. “We are seeing enough transmission that we have to take action.”

On Monday, Henry imposed a new province-wide order limiting household gatherings to the resident family and their ‘safe six.’ Enforceable by police, bylaw officers and environmental health officers from public health, those in breach of the order can be called out as if it were a noise violation and could faces stiff penalties.

Elsewhere in the province, school exposure events have escalated into outbreaks at two schools — a private school in Chilliwack and a public French language school in Kelowna, B.C. Both schools have shut for a 14-day incubation period and have, for the most part, succeeded in holding back the coronavirus, said Henry.

Of the 216 school exposure events cited Monday, less than 10 have led to further transmission.

“This was our first outbreak, so to me that tells us what we’re doing is working, and that public health is there and that they are working with the schools and the teams to investigate and make sure we’re learning from the cases that do happen in the case the outbreak,” said Henry, referring to the Kelowna outbreak.

But should parents do more to protect their children against COVID-19?

A parent at Glen elementary in Coquitlam reached out to the Tri-City News with concerns, noting the letter they got Sunday night from Fraser Health didn’t lay out any additional measures, even though their school has had two exposures over a period of several weeks.

In her press conference, Henry sought to allay parent concerns by reiterating that the school plans were working. And while stopping short of saying masks should be worn by all students, she encouraged their use among adults and older students who are required to wear them in common areas and in courses where learning groups are mixed.

The Tri-Cities has not been spared in what Henry described as a “clear and present danger” in the Lower Mainland as transmissions spike across Fraser Health.

On the weekend, Fraser Health updated its public exposure list in a warning to anyone associated with a wedding party that passed through a Port Moody restaurant Oct. 10.

The Tri-City News is also reporting multiple cases across five classes at Port Coquitlam’s Oxygen Yoga and Fitness, which has closed down for 14 days. It’s still not clear how many people have been linked to the cluster as the investigation continues.