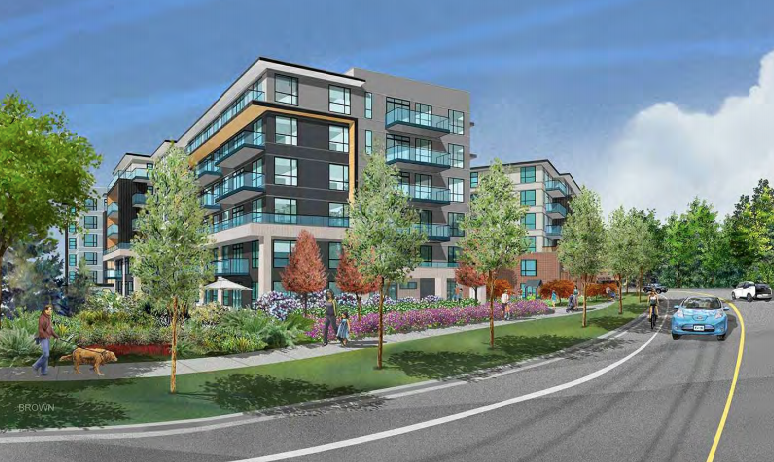 An artist's rendering of a 302-unit affordable rental housing complex planned for Port Coquitlam. It's located on Kingsway Avenue in the city, close to the Coquitlam River.City of Port Coquitlam

A 302-unit affordable rental complex close to railway tracks will have to meet strict noise and vibration regulations before it can be approved, Port Coquitlam has decided.

The project, a joint partnership between Peak Towers Development Ltd. and the Affordable Housing Societies, would see a large non-market residential apartment complex with a childcare facility built at Kingsway and Gately avenues.

It would provide homes at below market rents based on tenants’ income.

However, for the project to go ahead it needs rezoning for the 2.4-acre site located next to the Coquitlam River.

But some councillors are also worried about noise levels for children playing outside.

Coun. Steve Darling requested the developers ask Fraser Health if noise levels will be acceptable for the childcare and children playing outdoors.

Meanwhile, Coun. Laura Dupont noted that changes proposed to separate cars from trains at the intersection of Westwood Street and Kingsway Avenue, as proposed by a consortium of transportation authorities, including the Port of Vancouver, could result in less train noise.

The noise issue is one of a number of conditions that the project’s proponents will have to meet before the land can be rezoned. The city also wants to ensure the closure and sale of city lanes is approved to allow for the project and the sale of a portion of 2428 Kingsway Avenue, as well as the dedication of road to allow for widening of Kingsway and Gately avenues and a housing agreement to make sure the project is in line with the city’s Affordable and Family Friendly Housing Policy.

While the project has a number of hurdles before it can be constructed, council welcomed the project as key to providing affordable rental accommodation in the city.

Coun. Glen Pollock noted that non-market rental housing has advantages over market rental accommodation for being more affordable while Mayor Brad West suggested the city’s efforts to work with partners on affordable housing will serve a lot of people.

“This one is the most challenging [issues] — how to you meet the needs of people who no matter how hard they work and how frugal they are don’t have the means to afford market rents, not only in Port Coquitlam but all the parts of the region,” said West.

Currently, Port Coquitlam has 448 units of non-market rental housing in the pipeline with one already under construction.

The city has a further 5,250 units of purpose built rental housing in play, according to the planning department.

Port Moody, meanwhile, has 448 non-market rental units in the works, including 116 units under construction and 332 undergoing municipal approval processes, according to the planning department.