Anmore couple that helped bear cub not in trouble 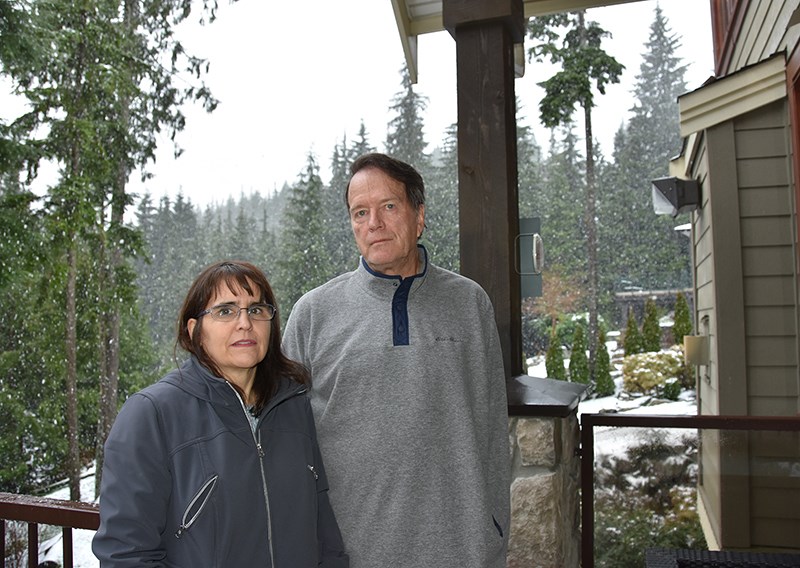 Anmore residents Corrine and Mike Robson helped rescue a malnourished black bear last week and were facing an investigation. But they have now been told there won’t be any charges or further investigation.Diane Strandberg

An Anmore couple is expressing relief that their good deed to rescue a starving black bear cub will not be punished.

In a Facebook post, Corrine and Mike Robson report that they were contacted by the BC Conservation Officer Service Sunday and were informed that there will be no further investigation or charges from their efforts to relocate a cub that was taking refuge on a neighbour’s patio.

BCCOS has also confirmed in a statement to The Tri-City News it will not be taking further enforcement action after an investigation determined that the “people who were clearly acting with good intentions.”

BCCOS also relayed that while it understands the “public’s desire to help” animals believed to be orphaned, members of the public “are not encouraged to interact with wildlife” because “early human intervention could lead to the separation of the family unit of bears.”

Last week, the Robsons were asked to assist a neighbour who found a small bear cub holing up in a corner of their outdoor patio. The young bruin appeared to be tired and malnourished, and was tucked in behind some packing material under a shelf.

Corrine Robson contacted conservation officers but was told to wait the night and then call back and an officer might come out to do an assessment.

According to BCCOS, advice was provided after the officer determined there “was no immediately urgency to attend,” taking into consideration public safety and the safety of the bear.

Typically, a bear cub isn’t moved in the hopes they would be reconnected with their mother, but in this case, according to the Robsons, the bear was under observation for 16 hours and no mother bear appeared, temperatures were falling bellow zero, the cub appeared emaciated and Critter Care Wildlife Society said there was space available for the animal.

Last Thursday morning, when Michael Robson returned from helping a volunteer with The Fur-Bearers Society take the bear cub to Critter Care Wildlife Society in Langley, he was confronted by conservation officers, who told him he would be investigated.

In a statement to the Tri-City News and posted on Facebook to the Anmore Conversations Facebook group, Robson thanked the group for its support and expressed a desire to see BCSOS “receive a complete overhaul."

The couple is also asking the public to make donations to Critter Care for the bear’s rehabilitation  or other related groups.

According to Critter Care, the cub’s weight when it was brought in was 20 lb., approximately 60 lb. lighter than it should have been this time of year. A spokesperson told The Tri-City News last Friday the bear was in stable condition.