Culture Guard spokesperson says group has a right to rally in public park after city cancels permit
Jul 17, 2018 11:27 AM By: Diane Strandberg 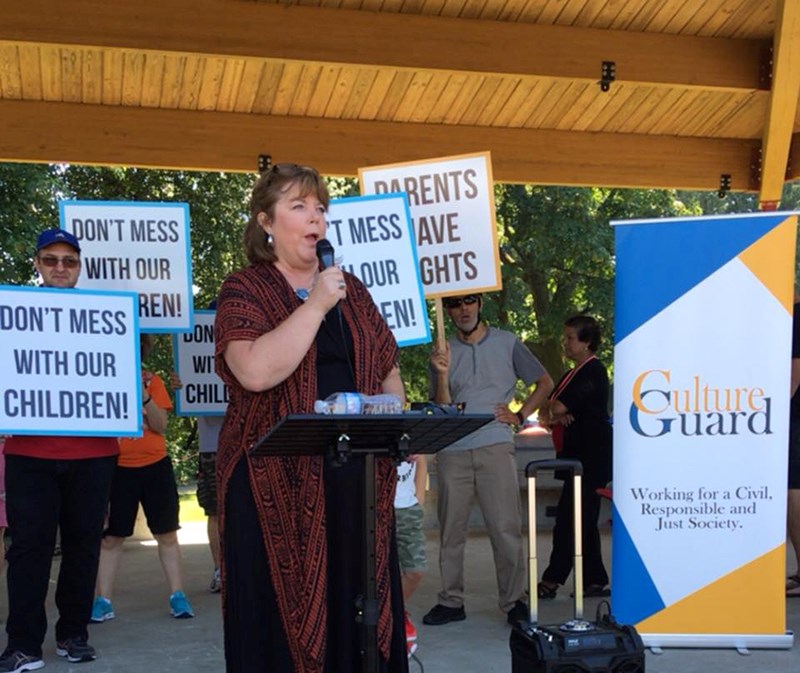 A group opposed to sexual orientation and gender identity (SOGI) teachings in schools held a rally Saturday at Rocky Point Park despite being told not to by Port Moody city staff.

Kari Simpson, spokesperson for Culture Guard, said the city overstepped its mandate by cancelling the group's booking because the public has a right to rally in a public space.
“It’s important for people to see and exercise their right in a unified way,” Simpson said.

The rally went ahead Saturday anyway, with groups of supporters carrying signs and a number of opponents in the audience.

In a statement, city manager Tim Savoie said little information was provided by the group in the permit application and, after the city obtained more details and heard complaints from the public, staff determined it was not an appropriate rental for the park, revoked the permit and refunded the group $187.74.

The city also planned to fine the group $100 for violating the city’s parks and facilities bylaw.

“Parks are intended to be safe, public spaces for all to enjoy, and the city of Port Moody does not rent space in public parks for potentially disruptive rallies," he said.

The group wasn’t asked to leave the park however, “to avoid serious confrontation and to minimize adverse impact on other park users,” Savoie said, adding that police and city staff were on hand to monitor the situation.

A video of the event on Culture Guard’s Facebook page shows a peaceful gathering with the group’s supporters responding to Simpson’s complaints that parents’ “freedoms are being challenged as we speak.”

She told the group people shouldn’t have to acknowledge a transgendered man as a woman and urged supporters to get involved in a recall initiative to vote out B.C. MLA’s who support SOGI policies.

She also said a local teacher who supports Culture Guard plans to run for school trustee in School District 43 but so far no one has come forward to The Tri-City News with a campaign announcement.

The rally held between 10 a.m. and noon on Saturday in the Rocky Point bandshell has generated a lot of heat on social media before and after. Dozens of comments have been made, primarily on Coquitlam council candidate Nicola Spurling’s Facebook page, including one by Port Moody Mayor Mike Clay, who pleaded with the public not to “invoke violence.”

“Everyone has a right of expression, not hate speech, and although we have revoked the permit, everyone is welcome in the park, which belongs to the people,” Clay stated in a Facebook post.

The Tri-City News called Clay but he has not yet responded.

Rick Glumac, Port Moody-Coquitlam MLA, attended the rally and said he is supportive of SOGI in schools because it recognizes there is a diversity of gender identity and sexual orientation.
"[SOGI] protects all students and makes our schools inclusive places, that’s what this is all about.”

Culture Guard’s appearance in the Tri-Cities comes a few months after a meeting was held by the group’s supporters in Coquitlam and a petition opposing SOGI was started by some School District 43 parents.

The petition at change.org has garnered 205 names since May and calls for parents’ right to opt out from a program it claims portrays an LGBTQ lifestyle and exposes children to adverse consequences for expressing contrary views that arise out of a family’s cultural traditions, religious, moral beliefs, fact and/or common sense.

In an interview Monday, Simpson said the group opposes the use of SOGI in schools, saying it could be harmful to the development of children’s sexual identity.

School District 43 notes on its website that SOGI is not a curriculum but a topic that can be addressed in many subjects, stating that there is a “legitimate need for increasing awareness of sexual orientation and gender identity to be as inclusive as possible.” SOGI follows changes to B.C. human rights legislation to include gender expression as a prohibited grounds of discrimination (sexual orientation was already include in the code), it further states at SD43.bc.ca under Resources.

In an email to The Tri-City News Monday, assistant superintendent Rob Zambrano said SOGI is not a separate course or curriculum and emphasized a new subject area is not being introduced.

“The work being done is not unique — it is part of the Ministry of Education’s mandated provincial curriculum in both public and private school systems. The Ministry of Education’s intent is to ensure that the diversity that already exists in our communities is reflected in existing classroom lessons to help make learning environments safer for all students. Age- and developmentally-appropriate resources are used, and training for teachers is ongoing.”

Culture Guard has been at the forefront of anti-SOGI protests in the Fraser Valley.