Businesses told investments in affordability, infrastructure will be good for the economy
Mar 1, 2019 3:45 PM By: Diane Strandberg 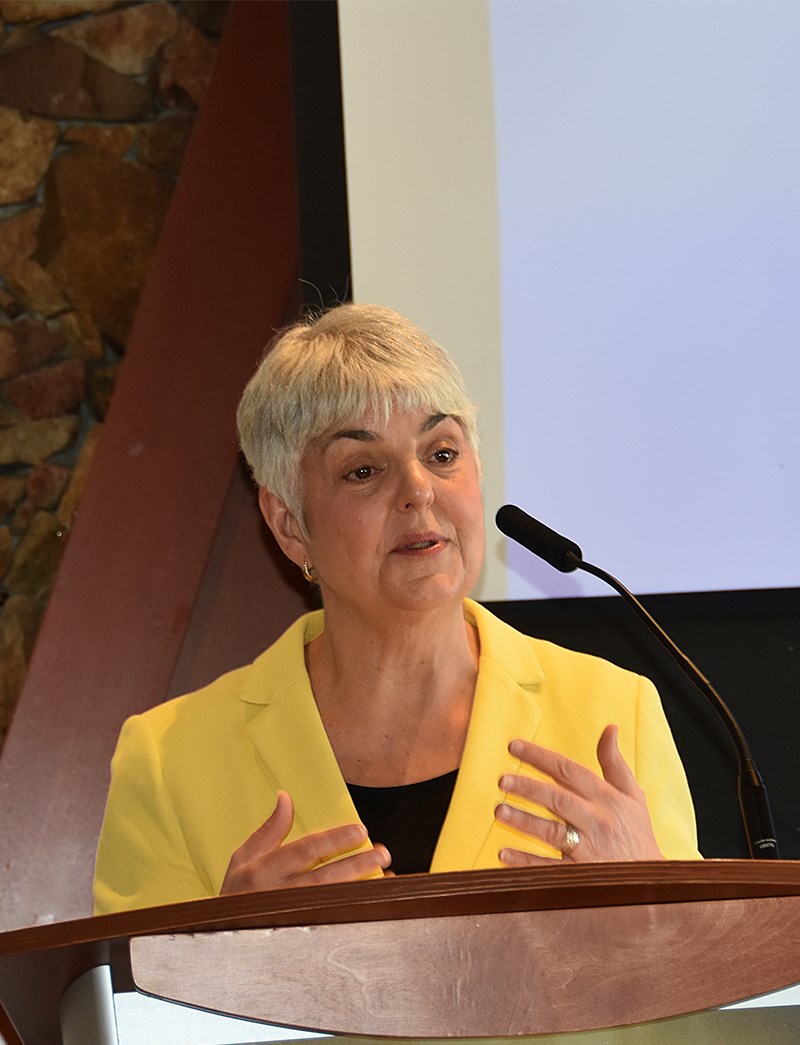 Finance Minister Carole James gave a presentation on the B.C. budget to the Tri-Cities Chamber of Commerce Friday.Diane Strandberg

If local businesses attending a Tri-Cities Chamber of Commerce luncheon Friday were hoping to hear Finance Minister Carole James back down on the Employer Health Tax, they attended the wrong function.

The Victoria Beacon Hill MLA told the assembled Tri-City business owners and politicians there may be room to tinker around the edges of the annual payroll tax replacing Medical Services Plan fees.

But for now the EHT is here to stay as B.C. is the last province with MSP fees, James said.

The province might consider moving on the threshold in future years “as the economy continues to grow,” James said, while axing MSP fees will save individuals $900 a year in premiums and families $1,800 a year, and is a major plank in the NDP’s affordability platform, which also includes expenditures in housing, infrastructure and childcare.

James was in town to talk about the recent provincial budget, capping a week that also saw Health Minister Adrian Dix announce 65 more doctors, nurses and nurse practitioners at a press conference in Port Moody, and, on the other side of town, BC Liberal leader Andrew Wilkinson was in Coquitlam last week to talk about his perspectives on the B.C. budget.

James delivered a measured description of the province’s economic performance, saying “caution” is her watchword, at the same time B.C. is posting two per cent gains in growth, large job gains and even a 2.3 per cent growth in retail sales.

Against a global backdrop of tension and uncertainty, B.C. is performing well, James said: “It really does show the relative strength of the B.C. economy when you see us weather the storms.”

But her major theme was affordability for British Columbians.

The new B.C. child opportunity benefit will replace the early childhood tax benefit, which currently provides families with up to $660 a year per child under the age of six.

“This will be a big benefit to middle income families,” James said.

She said improvements in affordability, including the elimination of interest on B.C. student loans, and infrastructure investments — such as the $2.8 billion Broadway subway line and $1.6 billion for the Pattullo Bridge replacement — are investments the government is making to grow the economy and make it easier for businesses to recruit and retain workers.

As for meeting the challenges faced by small business, James said many in the audience will see their companies benefit from a reduction in their corporate taxes from 2% from 2.5%.

James also touted the province’s conservative approach to budgeting, presenting a three year plan of surplus budgets that doesn’t include revenues from LNG development, although there are plans to build an LNG Canada export facility and pipeline in Kitimat.

She called it “prudence” to put off revenue projections until natural gas begins to flow.

Her comments were a direct counterpoint to those of Wilkinson, who told The Tri-City News last week that British Columbians were going to pay more in taxes and the government wasn’t doing enough to stimulate housing construction.

However, in direct response to Wilkinson's claim there is no money for a new Burke Mountain secondary, James told The Tri-City News that projects listed in the budget are those that are approved while Burke Mountain could be still in the planning stage.

That will be good news to students and staff who told the school board this week that visioning for the new joint middles/secondary school in Coquitlam was a success and will help the design team come up with a plan for the school.