Beavers an education for residents, city

A new beaver management plan could yet turn Port Moody into a paradise for the resourceful rodents.
Feb 6, 2018 2:26 PM By: Mario Bartel 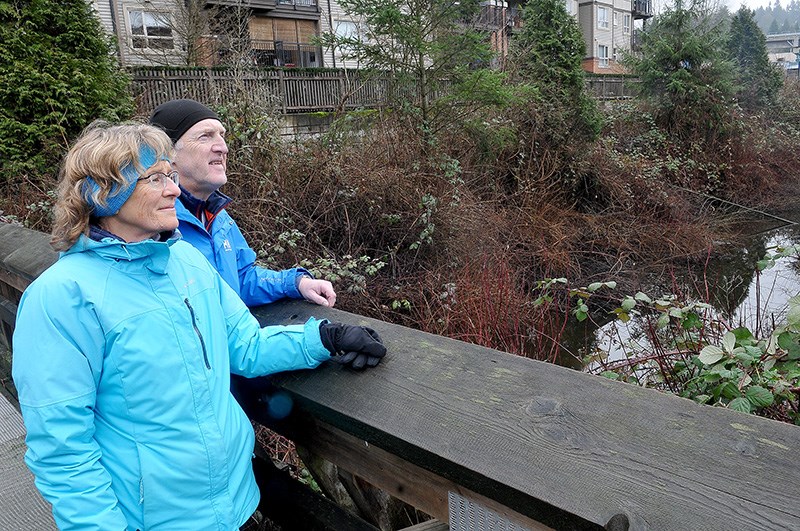 Judy Taylor-Atkinson and Jim Atkinson look out over the beaver pond on Pigeon Creek that was created by a family of industrious beavers that moved into the area in 2016. The death of one of the family's kits last December as crews from the city of Port Moody tried to evict them from an overflow pipe along the creek has prompted the city to begin development of a beaver management plan.MARIO BARTEL/THE TRI-CITY NEWS

A new beaver management plan could yet turn Port Moody into a paradise for the resourceful rodents.

But it will have to respect the science about the animals’ habits and lifestyle while finding a balance within urban environments where they’re settling.

That’s the best-case scenario, according to a pair of local advocates for fur-bearing animals, Judy Taylor-Atkinson and husband Jim Atkinson.

They were observers when a beaver pair made Pigeon Creek, in their Klahanie neighbourhood, home in 2016 and then became a family of four last summer. And they shared the community’s anguish when one of the young kits drowned in December as city crews attempted to trap and evict it from a den the beavers had constructed in a storm pipe that drains rainwater and prevents flooding.

Like many of their neighbours, the Atkinsons stood at the rail on the Klahanie Drive bridge that spans Pigeon Creek and watched as the beavers just below chopped down young trees along the banks, moved limbs and branches to build a dam and then a den, and slowly transformed the waterway into a placid pond.

Taylor-Atkinson has been studying the science of beavers and their management for years while her husband helps install flow regulators into dams to diminish the chances of damaging floods. Both are on the board of the Association for the Protection of Fur-Bearing Animals (The Fur-Bearers).

But despite having lived in Jasper National Park for 33 years, and in Port Moody since 2008, the Atkinsons had never actually seen a live beaver in its natural habitat until the pair moved in practically at their doorstep.

Beavers are notoriously nocturnal, Taylor-Atkinson said, but once they settled into their new home in the stream that runs amidst low-rise condo buildings, they grew accustomed to the human hustle and bustle around them. A curiosity quickly became a real life neighbourhood nature show.

While nearby trees that had been planted by the developer were wrapped to protect them from the beavers’ toothy toil, the natural habitat along the creek’s banks was left alone and the beavers’ activities respected. One neighbour even attached a log book in a plastic sleeve on the bridge railing so visitors could note their observations.

Taylor-Atkinson said the transformation of the creek to a beaver ecosystem was remarkable. The still water attracted bugs like dragonflies to alight, which attracted birds and bats and salamanders to eat them. The cool, sheltered eddies created by fallen limbs and branches in the water were perfect resting places for salmon fingerlings, which attracted ducks and even a juvenile heron to make the occasional visit for a snack. The dam filtered sediment, clearing the water and pushing it into the creek’s banks, encouraging new growth like bullrushes to take root.

“They were repairing the habitat,” Taylor-Atkinson said, adding beavers are considered a “keystone species” around which an entire ecosystem revolves — a marked contrast to old-school thinking that beavers and their industrious ways are a nuisance, especially in urban environments.

But she said proper wrapping of trees that need to be protected, and proactive measures to regulate the flow of water through beaver dams and discourage them from building dens in human infrastructure can mean a beneficial coexistence.

“You’re never going to kill your way out of beavers,” Taylor said. “Co-adaptation is what we have to do.”

This is especially important as more and more communities seek to daylight and restore natural waterways that have been diverted and culverted by past development.

Beavers, which can travel 20 miles in a day in search of a new home, are attracted to those reborn urban streams because of their low water levels and ready supply of younger trees, Taylor-Atkinson said.

“When this creek was built, nobody knew they were creating an ideal beaver habitat.”

Keeping it that way will be a matter of education and good science, she said — and a legacy for the young beaver that perished.

“We didn’t lose that kit for nothing."

You want mustard with that? Food carts could be coming to Port Moody's sidewalks
Apr 9, 2021 3:37 PM
Comments