British Columbians may still get $1,000 in the mail by Christmas: Horgan 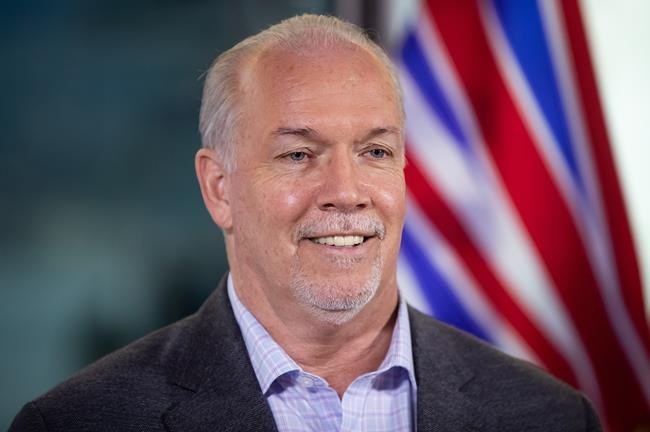 B.C. Premier John Horgan smiles during a post-election news conference in Vancouver, on Sunday, October 25, 2020. The New Democrats will govern British Columbia with 57 of 87 seats in the legislature, a decisive majority confirmed as the final ballot count concluded on Sunday. THE CANADIAN PRESS/Darryl Dyck

British Columbian families could receive $1,000 cheque in the mail before Christmas, part of a one-time recovery benefit promised by the BC NDP during its election campaign.

On Wednesday, Horgan told reporters his government is working to get the payments to British Columbians before Christmas but that that plan could be delayed.

“We’re pretty confident that… in a week or so we’ll be able to get those deposits done shortly thereafter,” said Horgan.

He added: “We’re targeting Christmas, of course,” before saying the payments could come in early January.

The $1,000 benefit applies to families with a combined household income of less than $125,000 per year. Payments to families making more than that will be granted on a sliding scale up to $170,000. Individuals making less than $62,000 a year were said to be eligible for a one-time $500 payment, with those earning up to $87,000 eligible for a payment along a sliding scale.

Horgan said his cabinet will be sworn in Nov. 26 and reconvene the legislature on Dec. 7 (Horgan also hinted that Port Coquitlam MLA Mike Farnworth would be returning in his role as Government House Leader).

If that were to proceed successfully, the premier said he’s confident data collected through taxes and worker benefits would be sufficient to deposit the funds by direct deposit into the bank accounts of eligible British Columbians.