Simon Fraser University in Burnaby announced Wednesday it is dropping the name Clan for its varsity athletic teams.
Aug 12, 2020 4:04 PM By: Chris Campbell 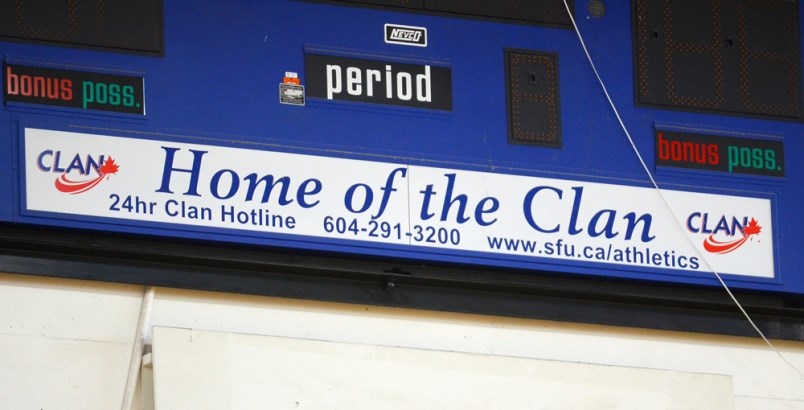 A banner in one of Simon Fraser University's gyms retains the old "Clan" logo. The Clan name may soon change due to its unfortunate association with a hate group, while pro sports teams in Washington D.C. and Cleveland are also investigating name changes. photo Cornelia Naylor/Burnaby Now

Simon Fraser University in Burnaby announced Wednesday it is dropping the name Clan for its varsity athletic teams.

The announcement came in a letter posted online by Andrew Petter, SFU’s president and vice-chancellor, who said the decision came after a consultation process that began in January.

“There are a number of reasons for this change, but the single most important factor influencing my decision is the views of student athletes on this matter,” Petter wroter. “Through our engagement process, students shared stories of unsafe situations, upsetting conversations, and the harm they experience due to misinterpretation and/or misuse of the team name. As a university that has made it a core commitment to foster a supportive environment for our students, we have an obligation to attend to their voices and concerns.”

The process to choose a new team name will be led by the athletics and recreation department starting in September, Petter said. You can read more about that process here.

The name Clan has deep roots, but was often misunderstood as the word “klan” in connection with the racist group the Ku Klux Klan.

“As we move away from using the Clan as our team name, I want to stress that we continue to be exceedingly proud of the people, teams and accomplishments associated with the Clan over our long history,” Petter said. “The Gaelic word for family was chosen to honour friendship, loyalty and connection, commitments that remain deeply engrained at SFU.”