The development company is also looking at the possibility of relocating residents from burned-out units to other vacant apartments in the building that were not impacted by the flames.
May 1, 2019 7:03 AM By: Gary Mckenna 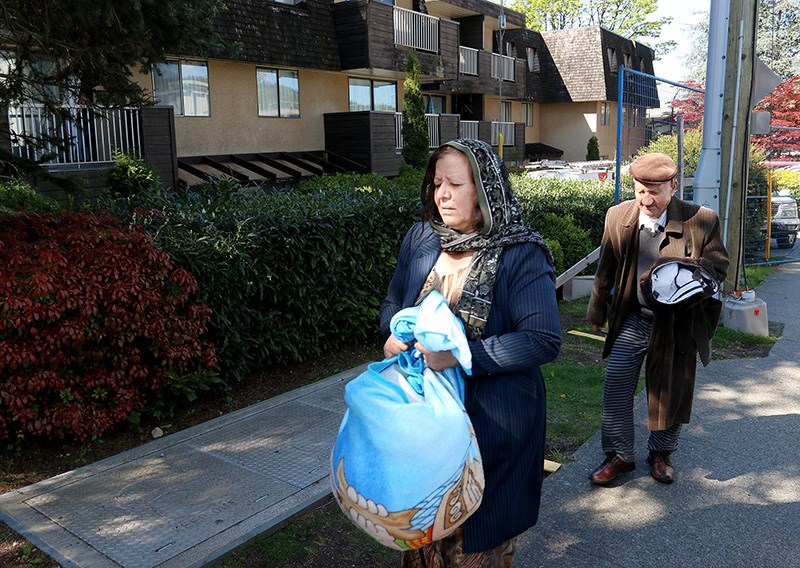 Residents of an apartment building at Foster Avenue and North Road in Coquitlam remove personal belongings after an overnight fire.MARIO BARTEL/THE TRI-CITY NEWS

The development company that owns a Burquitlam apartment building that caught fire Monday night is offering financial assistance to some of the affected tenants.

No one was hurt in the blaze, which broke out shortly before midnight at Foster Avenue and North Road, but dozens are believed to have been displaced.

Lesli Boldt, a spokesperson for Amacon Developments, which owns the property and is planning to redevelop the site, said the company was looking at ways it could assist residents.

The company is also looking at the possibility of relocating residents from burned-out units to other vacant apartments in the building that were not impacted by the flames. There are 53 units in the damaged structure, of which only 34 were occupied and more could be available in a neighbouring building, she added.

"We did a fairly aggressive exterior attack," he said. "We did some interior firefighting as well."

Apartments located within the building on the other side of the fire break appeared to remain mostly intact, Ogloff added, however it is too early to say when and who could return.

"It will take a little time," he said. "First and foremost, they have to make sure the building is safe for re-entry."

Investigators are still trying to determine what caused the blaze, but it appears to have started outside of the building.

On Monday, hours before the fire broke out, representatives from Amacon were before Coquitlam council discussing their plans for the site, which includes a 41-storey tower and six-storey low-rise rental building.

The project first came before the city last year, however the company decided to rescind the proposal after running into significant opposition during a public hearing.

Chris Quigley, the company's senior development manager, admitted to council-in-committee on Monday that communication between Amacon and the tenants had been poor. He said a message sent to residents prior to last year's hearing was "unintentionally vague and created some uncertainty for the tenants living in the building at the time."

He added that the company had learned from the experience and have tried to have better communication with existing tenants.

"It is something we want to learn from," he added. "We are starting to work on a tenant engagement plan."

The company is also looking at including below-market rental in the project and has partnered with the YWCA to oversee the low-cost housing portion of the development.

Because the project is being resubmitted, it will begin back at first reading and a public hearing is expected to be held later in the spring.

• The Coquitlam Foundation has set up a donation page for residents of the building here.