The clinic was opened as a temporary stop-gap to make up for a lack of testing options in the Tri-Cities as local doctors waited for Fraser Health to open what they understood would be a high-capacity public COVID-19 testing site. But after four months, that hasn't happened.
Sep 24, 2020 3:17 PM By: Stefan Labbé 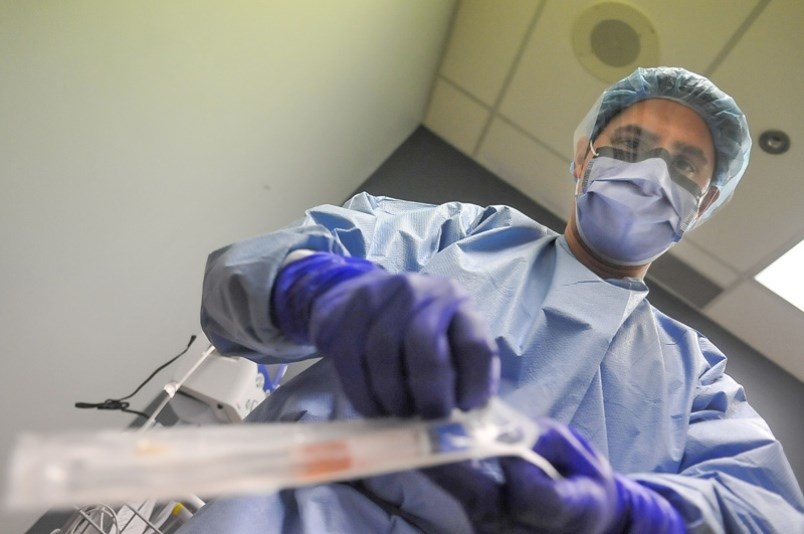 Dr. Ali Okhowat of Coquitlam prepares a pharyngeal swab kit at a COVID-19 clinic in New Westminster. In June the clinic was moved to Port Coquitlam as a stop-gap before Fraser Health could open its own clinic. But after four months of waiting, doctors say they are burnt out and can't go on.STEFAN LABBÉ/THE TRI-CITY NEWS

The only COVID-19 testing clinic operating in the Tri-Cities is shutting its doors next week, citing a lack of staff and resources.

The Influenza Like Illness Assessment Clinic in Port Coquitlam is set to close Friday Oct. 2 at a time when active cases of the virus have reached levels not seen since the pandemic first started in British Columbia.

The clinic first took over testing for the Tri-Cities and New Westminster on June 15, when a previous site, run by the Fraser Northwest Division of Family Practice and supported by Fraser Health, was forced to shut down. But the Port Coquitlam testing centre has had little support from Fraser Health beyond a supply of personal protective equipment, and doctors there say they can no longer manage their regular jobs while keeping the clinic open.

“With our limited staff and resources, we are no longer able to continue running our testing site because our doctors are burnt out and our staff are overworked,” said lead medical director Jordon Sugie and Dr. Carllin Man in a written statement Thursday.

“We simply cannot continue to work for our own health.”

The two physicians said the clinic was opened as a temporary stop-gap to make up for a lack of testing options in the Tri-Cities as they waited for Fraser Health to open what they understood would be a high-capacity public COVID-19 testing site.

“Unfortunately, after four months, this has still not happened,” wrote doctors Sugie and Man.

With the closure of the Tri-Cities’ only COVID-19 testing clinic, the closest testing sites are now at the Maple Ridge Urgent and Primary Care clinic, and at drive-thru centres in Burnaby’s Central Park and in South Surrey.

On Saturday, Fraser Health and the province announced the opening of the Tri-Cities’ own urgent and primary care clinic, slated to open in the new year. But a spokesperson for Fraser Health said it has not yet found even a temporary location for the facility and there is no word on whether it will be equipped to test for the virus that causes COVID-19.

Only days later, Fraser Health announced Langley and Maple Ridge testing facilities would be receiving funding to boost their COVID-19 testing capacities. But in an email to the Tri-City News, a spokesperson with Fraser Health could not provide any information on the health authority’s plans to set up a testing centre for the Tri-Cities.

On Thursday, both doctors from the clinics urged residents of the Tri-Cities and New Westminster to express their concern over the lack of a “sustainable, publicly-run testing site like every other city in the Lower Mainland.”

“Please let your voices be heard,” they wrote in the letter, directing residents to MLAs, health officials and mayors across the region.

“The lack of a testing site in the New Westminster and Tri-Cities area leaves a significant population without a convenient and accessible COVID-19 testing site.”