Calls to license, insure cyclists in B.C. get mixed reviews 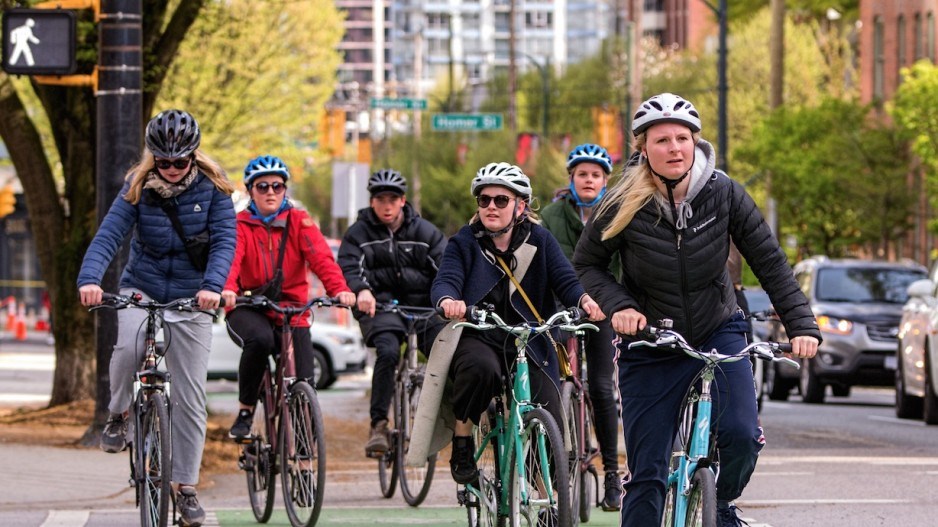 The Insurance Corp. of British Columbia’s (ICBC) sweeping changes to how it covers automobile drivers have prompted calls to impose new licensing and insurance requirements on cyclists and e-scooter riders.

While licensing and insuring bicycles is not part of the government’s plan, these calls, which include demands that riders be required to pass an online road-safety course, are not new.

After a cyclist allegedly assaulted a pedestrian in Kitsilano in 2015, Vancouver Coun. Melissa De Genova urged the City of Vancouver to explore a bicycle registration program.

Collisions between cyclists and pedestrians, and between bikes and cars, have generated countless court cases through the years.

B.C. Supreme Court in 2004 ordered a cyclist to pay an injured pedestrian more than $130,000. Lawyers at the time said the cyclist’s homeowner insurance policy would cover the payout.

“Home insurance may come into play, depending on the home insurance policy,” said Acumen Law lawyer Kyla Lee. “If it does not, then it is a matter of identifying the cyclist, suing the cyclist and trying to recover money in the same civil process as if a person came up to you on the street and hit you in the face.”

That means recourse would be small claims court, or B.C. Supreme Court if the amount sought is above $35,000.

Many of Lee’s clients complain about cyclists causing collisions or driving erratically. She said there should be at least mandatory education for anyone riding a bicycle on the roads from around the age of 15 and up.

Schools could easily integrate an online cyclist-education program into curriculums, while adults could also take online courses and receive a certificate in the mail if they pass, she added.

“The Motor Vehicle Act in B.C. makes it mandatory for cyclists to obey the same rules, subject to a few explicit exceptions, that drivers are expected to obey,” she said. “They have to stop at stop signs. They can’t use an electronics device — all of those things.”

Requiring cyclists to pay a nominal sum, such as $25 per year, would also help put road safety at the front of their minds when on the road, Lee said.

“It doesn’t have to be something very expensive, but they do pose a risk on the roadway,” she said. “They pose a risk to pedestrians. They pose a risk, in some circumstances, to vehicles if they are driving erratically or not riding in the bike lanes.”

Some cyclists agree and say that an insurance regime would be good for them.

Glacier Media’s Richmond News cycling columnist Geordie McGillivray wrote in 2018 that he wished he could pay ICBC to insure his bike because in many potential accident situations, ICBC would cover expenses if his bike were an insured motor vehicle.

Other cycling advocates, however, vehemently oppose mandatory licensing and insurance.

Toderian UrbanWorks consultancy principal Brent Toderian slammed the calls as ironic in that they are often made in the name of cyclist safety yet will wind up making roads more dangerous for cyclists.

“In my experience, calls for licensing cyclists are usually raised by people who would like to see fewer cyclists,” he said. “It would have that effect.”

Anything that makes cycling less attractive leads to fewer cyclists, and when fewer cyclists are on the roads, drivers are less likely to expect to see cyclists, Toderian said. That can lead to more accidents because drivers become less used to sharing the road, he explained.

Toderian acknowledged some cyclists drive unsafely but said that is not a reason to implement bad public policy.

“Improving driver education would have a much bigger effect on urban biking safety than improving urban biker education,” he said.