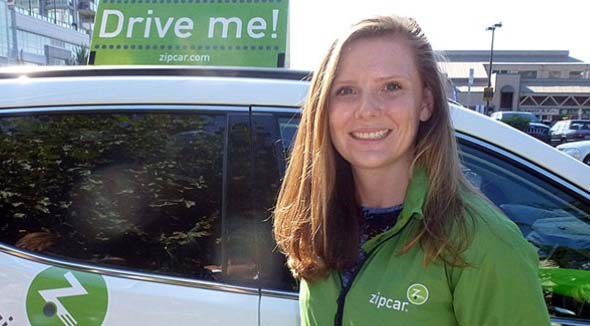 Hillary Falk, a Coquitlam resident who fell in love with the convenience of car sharing, is now a location manager for Zipcar, which has two cars available to members at Glen Drive and Pacific Street, with three more to come near stations along the Evergreen Line by the end of the year.diane strandberg

Long nights of studying at Simon Fraser University became much easier for Coquitlam resident Hilary Falk when she discovered Zipcar.

On some rainy nights at the university atop Burnaby Mountain, the then geography major would tap her fob to the windshield of a Zipcar vehicle and drive home for the evening, bringing the car back to its parking stall at SFU the next day in time for class.

"It was so convenient, especially on those nights when I was too tired or it was too dark and wet to take the bus," recalls Falk.

Today Falk is the location manager for Zipcar, the car sharing company which Wednesday announced it was introducing two cars to Coquitlam for members to use for a fee, with three more to come in locations close to the Evergreen Line by the end of the year.

She's not the only Zipcar convert to attend a press conference announcing the U.S.-based company's introduction to the city.

Abdul Jiwan, president of Redbrick Properties Inc., which is building a 41-unit rental building at 945-951 Charland Avenue in Coquitlam, was on hand to see what the new vehicles look like.

His company has a deal with Zipcar to provide a hatchback model vehicle for residents to use when the apartment building is complete, about two years from now.

Jiwan says car sharing makes sense for renters, many of whom don't own cars, but occasionally need the convenience of a vehicle, while reduced parking requirements for the structure made the rental building, a first in nearly four decades, economically viable.

The building will have 44 spots for 41 residents, and three for visitors, down from 52 total spots typically required for such a development, and Jiwan credits the city's affordable housing strategy for providing the flexibility.
But residents who choose not to have a car don't need to have one with Zipcar, he said.

"What car share does is if someone needs a car, they can become a member and book a car when they need it."

"Our deal with Zipcar will also provide all of the initial tenants with 41 pre-paid annual memberships which includes the application fee and the first year annual membership fee in addition to an annual driving credit of $45 each," he added later.
During the launch, attended by city employees, councillors and Mayor Richard Stewart, a ribbon was cut to announced that a Nissan Sentra named "Yoga" and a Hyundai Santa Fe named "Piper" would be available by the hour or by the day.
Zipcar joins Modo, a car co-op, in providing car sharing opportunities in the Tri-Cities.