Project started as a way to overcome an emotional rough patch during the COVID-19 pandemic
May 13, 2020 10:47 AM By: Mario Bartel 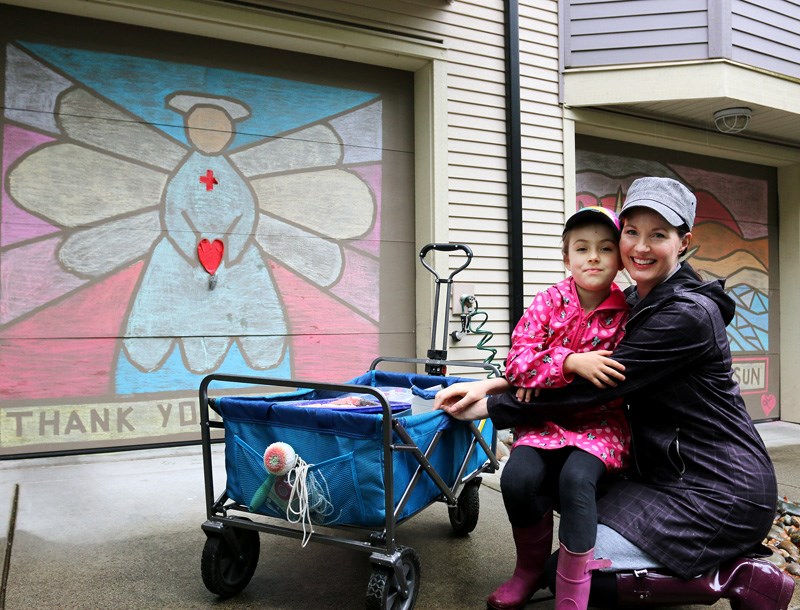 Ladawne Shelstad and her daughter, Maddyn, 6, show off two of the chalk murals they designed and coloured on garage doors in their Klahanie neighbourhood to help brighten spirits during the COVID-19 lockdown. Their effort also inspired other neighbours to commission murals or design their own for their garage doors so now there's more than a dozen completed.MARIO BARTEL/THE TRI-CITY NEWS

What started as a little activity to draw chalk rainbows on the pavement has transformed a Port Moody neighbourhood into a gallery of giant colourful murals that is bringing people together and lifting spirits during the COVID-19 lockdown.

Ladawne Shelstad said she was going through a rough emotional patch early in the pandemic when her six-year-old daughter, Maddyn, suggested they create rainbows on the road in front of their Klahanie townhouse.

Working together, Shelstad found the mother and daughter project soothed her anxiety. It also fired her creativity. So they extended their effort to their garage door, decorating it with a giant heart.

When Shelstad discovered one of her neighbours was a nurse, she doodled on paper a design for a mural of thanks she could chalk on her garage door.

A project manager in the communications industry who’d taken some art courses “years ago,” Shelstad found inspiration in stained glass windows. Using tape and a little elbow grease to get the wooden doors clean of dust and grime so the chalk could adhere, she and Maddyn did one mural, and then another as neighbours enquired whether their garages could be included in the project as well. A donation of chalk helped push them along.

Shelstad said the one to eight hours she spent working on each mural were “completely uplifting.” She met some neighbours for the first time, learned about their own interests and challenges navigating the pandemic. Three of them are health care workers, she discovered, along with a teacher who’s coping with doing her job from home, and even some people who’ve lost their job.

“We’re all part of the same thing,” she said. “We’re in this together, but apart.”

Other neighbours enquired about designing their own murals.

Before long every garage door in Shelstad’s lane had been decorated and the gallery has even extended to other lanes in the complex, some fences and the brick rostrum at the entrance to their street.

Shelstad said the project has showed her the power creativity can have to help people get through tough times. So others can explore the healing salve of their own expression, she’s also assembled kits of chalk and art supplies, with proceeds going to Share family and community services.

“You find what gives you joy,” she said. “The whole neighbourhood has embraced something. We’ve been in this glorious bubble of positivity.”

• To learn more about the mural project, or to acquire an art kit, go to Port Moody Heart Market on Facebook.