Coquitlam considers cancelling Lights at Lafarge due to COVID-19

The popular holiday light display draws thousands of people to Town Centre Park each year and staff said they won’t be able to ensure crowds are physically distancing
Oct 26, 2020 11:22 AM By: Gary Mckenna 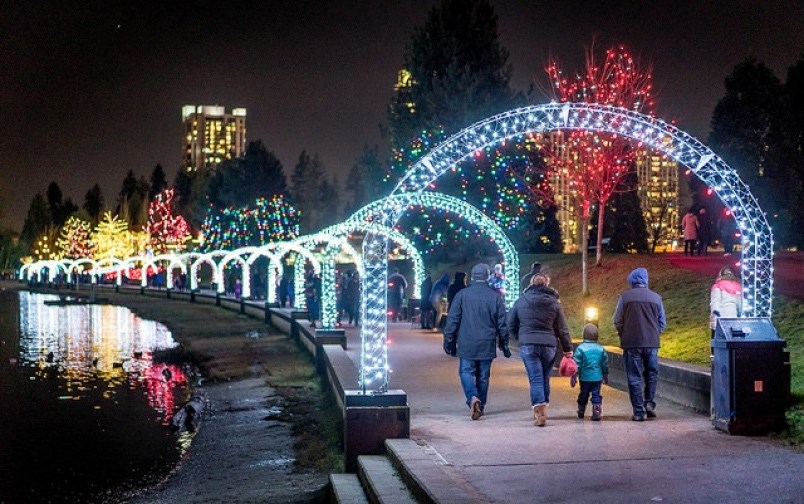 The city of Coquitlam's Lights at Lafarge event could be cancelled this year due to COVID-19. Council will consider a report from staff that suggests drastically scaling down the display to avoid crowding at Town Centre Park.City of Coquitlam

Coquitlam’s popular Lights at Lafarge event could be shut down this year due to the COVID-19 pandemic.

Council will consider a report at committee this afternoon that discusses dramatically scaling back the display in order to discourage large crowds from gathering at Town Centre Park. The event typically draws between 8,000 and 10,000 visitors on peak days and parks staff said it would be difficult to control the influx of people and ensure proper physical distance protocols are observed.

“Staff is of the opinion the city should officially cancel the Lights at Lafarge display for 2020-’21,” the report said. “Instead, staff recommend ‘passive’ lighting in Town Centre Park in a way that does not draw large crowds, but still creates an attractive environment for Coquitlam residents and park users.”

The scaled-down display will see lights posted around the perimeter of the park, which would avoid concentrating people on the Lafarge Lake trails and could be enjoyed at a distance, the report stated. The event will not be branded as Lights at Lafarge and there will be no promotion or advertising.

Because many indoor events have been cancelled, parks staff said they believe that if Lights at Lafarge went ahead as normal, it would likely draw even more people this year.

“There is a demonstrated appetite for outdoor events,” the report stated, later adding: “This modified and subdued approach compared to previous years would be able to function as passive enjoyment while respecting health regulations designed to protect safety and well-being of the public.”