City wants to be paid for road work done because United Boulevard rehabilitation has been delayed for pipeline construction
Mar 20, 2019 2:01 PM By: Diane Strandberg 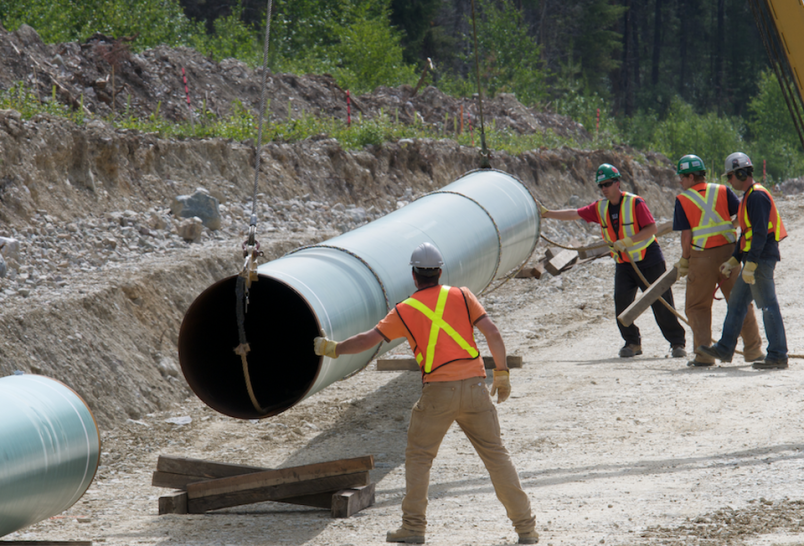 Construction of the Trans Mountain pipeline expansion is on hold pending more review. In the meantime, Coquitlam wants to be reimbursed for road maintenance it's doing to keep United Boulevard passable until a major road rehabilitation project can be done. The project has been deferred until pipeline construction is complete.Trans Mountain Canada

It’s been a bumpy road for the $7.4 billion Trans Mountain pipeline expansion project.

Dogged by protesters, defended in court battles, and facing numerous regulatory hurdles the pipeline system owned by the Canadian taxpayers has another thorn in its side.

The city of Coquitlam is demanding payment for work it did fixing United Boulevard where the twinned pipeline is eventually supposed to go and it wants its money back now.

“The city’s position is that the city should not incur extra costs that are the result of a 3rd party project,” stated Brad Lofgren, director of public works, in an email to The Tri-City News.

Coquitlam has sent Ian Anderson, president of the Trans Mountain Corporation, a bill for $151,000 in maintenance costs for United Boulevard that have taken place while road work from Schooner Street west was deferred to make way for the Trans Mountain Expansion Project construction to be completed.

Now that the pipeline project is on hold pending further review and First Nations’ consultation, it’s not known when the money will come.

Trans Mountain told the Tri-City News Tuesday it’s ready to sit down with the city and talk, but to date there has been no correspondence or cheque, according to Lofgren.

“These deferred costs are costs that the city would not have incurred had the road rehabilitation project occurred and include a significant amount of patching by city crews to keep the road safe and passable, as well as a mill and pave project of the westbound lanes last fall to maintain traffic safety because the condition of that section had deteriorated past the point of being patched,” Lofgren stated in an email to The News this week.

The city’s feisty approach to dealing with Trans Mountain follows an appeal to the National Energy Board to get the company — then owned by Kinder Morgan — to change its route to avoid the city’s road, which the city said would cost $59 million in ongoing maintenance over 50 years because of the pipeline construction.

In April, 2018, the NEB denied the route change on the basis that the United Boulevard business district is the “best possible” and balances safety, engineering and environmental factors, and will have the least impact on businesses.

A few months later, the Canadian government bought the pipeline system to get the pipeline project built only to be told by the Federal Court of Appeal that the NEB’s project assessment was flawed.

The NEB continues to maintain that the pipeline remains in the public interest of Canada.

However, all construction work has stopped although areas not impacted by the ruling such as planning and detailed engineering and design continues, according to a media relations spokesperson for Trans Mountain.

“We remain engaged with the city and are always happy to sit down and discuss any issues of concern with the city of Coquitlam,” the spokesperson further stated.

Meanwhile, it’s up to the federal government to decide whether the project should go ahead.

Among the concerns are adequate consultation with First Nations and the impact of tanker traffic on marine life.

Meanwhile, the B.C. government is in Appeal Court to argue that it should be allowed to create a permitting system to regulate hazardous substances through its territory.