'Whether or not municipal taxpayers should subsidize pipeline companies is what is at stake here,' says mayor Richard Stewart.
Oct 28, 2020 2:09 PM By: Stefan Labbé 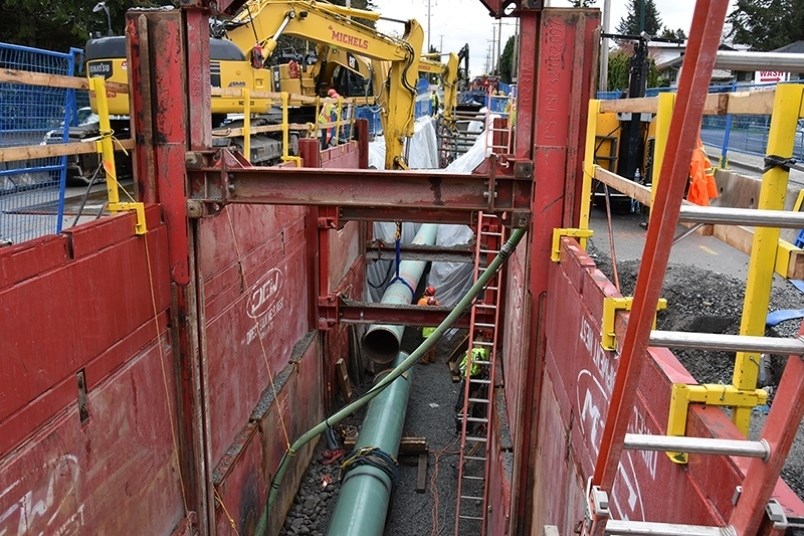 The city of Coquitlam has been granted leave to appeal an order from the B.C. Utilities Commission authorizing FortisBC to abandon a decommissioned gas pipeline running through city lands in one of the busiest infrastructure corridors in Metro Vancouver.

The order, handed down April 15, 2019, had directed the city and FortisBC to share any removal costs should Coquitlam request the pipeline’s removal to install municipal infrastructure along Como Lake Avenue.

The dispute is over a 5.5-kilometre gas pipeline built in 1958 along the now busy thoroughfare. On Oct. 16, 2015, nearly five decades later, the BCUS approved the construction of a new pipeline that would pass along the same route, through Coquitlam, Burnaby and Vancouver, and leave the old line permanently decommissioned.

As one of the largest urban infrastructure projects FortisBC has ever completed, the new pipeline was finished in December 2019 after workers put in one million construction hours and completed roughly 1,900 welds. But not before disrupting the commute of 27,000 motorists a day and shaking the customer base of several businesses adjacent to the project.

But the city of Coquitlam withheld its consent for the construction of the new line, arguing that FortisBC should pay for the removal of 380 metres of the abandoned pipeline along a stretch the city has earmarked for its own infrastructure plan. The city also asked for Fortis to repave the entire width of the 5.5-kilometre pipeline corridor and offer a $6 million credit for all the paving work, something that had been denied in the 2019 BCUC decision.

“Whether it’s a pipeline carrying bitumen or oil to the coastline, [the questions is] whether a private company gets to carry its product under a very busy municipal corridor, gets to leave its junk in the ground and gets to do it for free,” Coquitlam Mayor Richard Stewart told the Tri-City News.

“It’s blatantly unreasonable and unfair. Whether or not municipal taxpayers should subsidize pipeline companies is what is at stake here.”

On April 2, 2020, the BCUC dismissed the city’s application to reconsider its decision, noting that regulating such infrastructure was an “integral part” of its core mandate to set rates and protect “the supply system in a manner which safeguards the public interest,” according to court documents.

“There are important reasons why BC Hydro has to be able to have access to municipal roads, to string wires or lay ducts so the residents of the community can have power. We don’t argue those issues,” said Stewart.

“This is a different animal… Particular in the case of privately-owned pipelines and particularly when it runs through the municipality and not to it.”

The city of Coquitlam filed to appeal the dismissal on June 30. Central to its claim was that “a pipeline on municipal lands falls outside of BCUC jurisdiction once it becomes permanently decommissioned,” wrote Justice Abrioux in the Oct. 23 decision released Wednesday.

Coquitlam claimed that removing the pipeline under the original order’s terms would cost the city about $38 million, “a crippling amount for any city,” said Stewart.

“We’re in good financial shape because of the sacrifices of municipal taxpayers and those sacrifices shouldn’t accrue to the shareholders of FortisBC,” he added.

But it’s not just Coquitlam that could suffer the consequences of such a ruling; executive director Gary MacIsaac of the Union of British Columbia Municipalities provided an affidavit claiming that the BCUC order would have “far-reaching consequences” for municipal budgets and planning, according to court documents.

In granting the city of Coquitlam an appeal, Justice Abrioux wrote that the case would “raise novel issues of law concerning the jurisdiction of the BCUC vis-à-vis local governments” and that “the fate of decommissioned public utility assets like pipelines is undoubtedly a matter of public importance.”

With no “obvious answer” on whether the BCUS has jurisdiction over decommissioned assets and whether they can be abandoned on municipal lands, not to mention “the number of other pipelines which are approaching the end of their usefulness,” Justice Abrioux granted the city of Coquitlam its day in court.

“There’s a lot at stake and I suspect many utilities are sitting up and taking notice now,” said Stewart, adding the city will move to bring the case to court as soon as possible and that the “delay won’t be on our side.”