COVID-19 isn't stopping people from putting up displays, in fact touring around display homes may be one of the safer ways to enjoy Halloween this year
Oct 8, 2020 3:55 PM By: Diane Strandberg 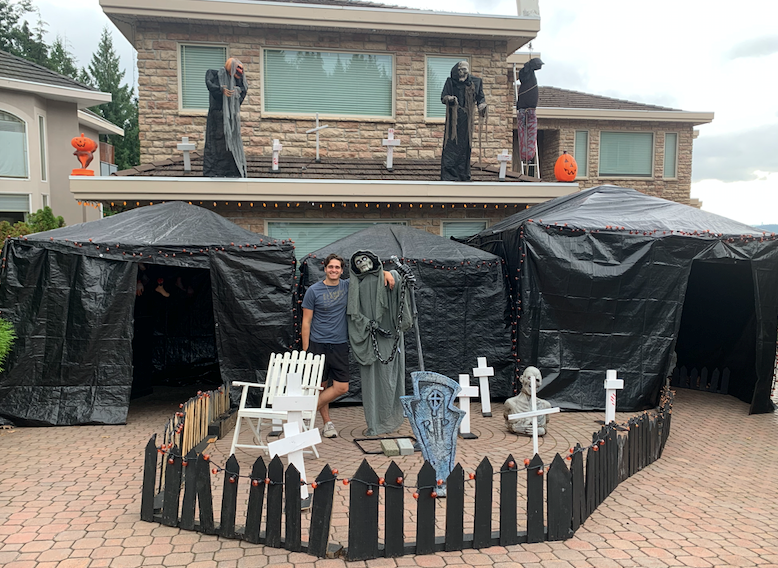 Macarthy Whyzel out front of his house at 2986 Forest Ridge Place in Coquitlam. It’s taken the 20-year-old about three weeks to put all the details of his scary graveyard and creepy hospital together and he hopes people will come and visit for Halloween. Some of the display is in the tents that people can walk through.Submitted

Many people are trying to figure out how to celebrate Halloween safely this year.

But for one Coquitlam resident, creating a scary display that people can drive by and walk through outdoors is one way to keep the spirit of Halloween alive, while also doing things carefully to avoid spreading COVID-19.

Macarthy Whyzel got the inspiration for creating an elaborate display from his neighbour, who for many years put up a graveyard display for Halloween.

“I basically grew up with that Halloween display since I was two,” said Whyzel, a 20-year-old Douglas College student.

Last year, Whyzel’s display was a modest one of mostly lights and a few creatures. But this year, he decided to go all out after his neighbours decided not to put their display up.

He purchased a number of items from a local thrift store, and repurposed them as props. He also purchased animatronics and other items to make the display look more authentic. His girlfriend Chantelle Leimer helped out and, while his parents don’t mind his creative efforts, Whyzel said they are making sure he stays safe when he works on the roof.

“The influence was really our next-door neighbours,” said Whyzel, who said he hopes to put on an exhibit that will be thrilling for old and young alike and he is also posting updates on Tik Tok at @rebornking.

For those who want to see the display in person, they can choose to either drive by or get out and walk through three exhibits. However, groups are encouraged to keep two metres apart.

“This is something I hope people will really enjoy,” Whyzel told the Tri-City News.

The Tri-City News will post a map of Tri-City Halloween light displays online. So if you have a great display to share, email the details and a photo if you have it to newsroom@tricitynews.com