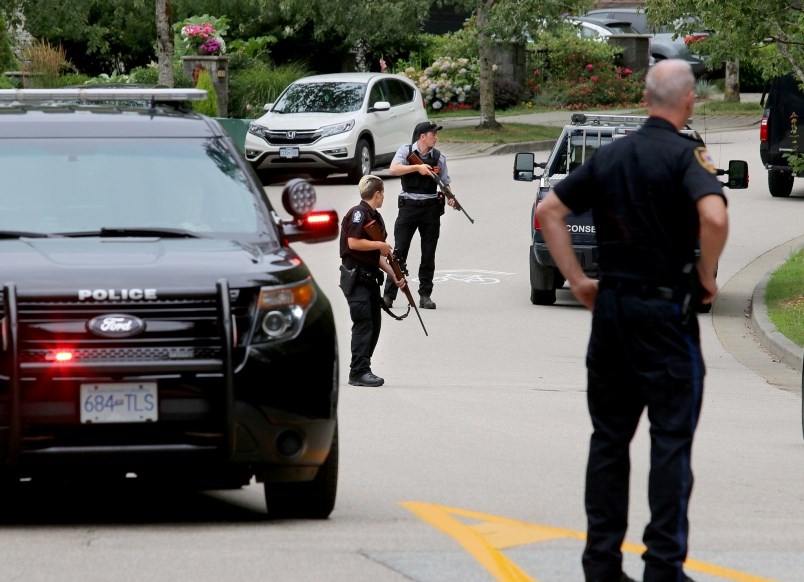 Conservation officers look for a black bear mother and cubs on Heritage Mountain. There were 30 bears killed in the Tri-Cities in 2019, sparking a public outcry in some quarters and leading to the arrest of at least three residents on obstruction charges. One of those is now suing RCMP and conservation officers over the incident.MARIO BARTEL/THE TRI-CITY NEWS FILE

A Coquitlam senior detained last summer by B.C. Conservation Officers as they pursued a family of black bears is suing the service, alleging he was unlawfully detained, assaulted, battered and defamed.

Patrick Swonnell, 69, was one of three people arrested by conservation officer Sgt. Todd Hunter July 30, 2019, near Mundy Park in Coquitlam. Sgt. Hunter was pursuing a black bear mother and her two cubs, an incident which attracted the attention of nearby neighbours, according to a lawsuit filed with the Supreme Court of British Columbia Sept. 14.

The retired bus driver claims he left his home to see what was happening after hearing a neighbour scream as conservation officers pursued the bears, notes the notice of civil claim.

While walking along a nearby sidewalk, Sgt. Hunter is alleged to have approached Swonnell to warn him he would be charged with obstruction should he not leave the scene. As Swonnell started walking home, he heard three blasts of a shotgun in the nearby woods.

That’s when Sgt. Hunter began shouting incomprehensibly at Swonnell, charged at him and began chasing him, alleges the claim.

Reaching the front steps of his home, the senior tried to enter his home, but “Hunter grabbed him and dragged him away… with the intent to harm Swonnell,” alleges the document.

The man was placed under arrest for obstruction. Sgt. Hunter is said to have called RCMP officers to the scene, at which point the man claims he spent 40 minutes in the back of a police vehicle.

The RCMP officers are also named in the claim for allegedly assaulting the man and unlawfully detaining him — allegations, that if proven true, would mean a breach of his Charter rights.

Swonnell was later released back to Sgt. Hunter on the promise to appear before the court on two charges of obstruction. Exactly six months later, however, Crown Counsel and the B.C. Prosecution Service decided not to approve the charges against Swonnell, the Tri-City News has confirmed.

Read more about bears in the Tri-Cities:

The lawsuit also names Insp. Murray Smith — responsible for BCCOS operations in the Lower Mainland — for “defamatory statements” he and Sgt. Hunter later made to the press, indicating that Swonnell physically stepped between officers and the three bears and that he was “actively interfering with officers.”

“…Smith portrayed Swonnell as guilty,” reads the civil claim, adding “the presumption of innocence was not alluded to.”

Swonnell claims the incident has caused him “significant physical and emotional trauma,” including extreme left foot pain, back pain, as well as aggravation of plantar fasciitis and a bone spur condition.

Beyond severe distress, anxiety and headaches, Swonnell claims he was embarrassed and humiliated, and has suffered repeated nightmares due to the encounter with Sgt. Hunter.

In a visit to a doctor a week after the incident, the lawsuit claims Swonnell suffered a nervous breakdown and couldn’t stop crying for 10 minutes, prompting the doctor to prescribe him anti-anxiety medication.

“In my opinion, BCCOS policies and actions need to be independently reviewed. As well, BCCOS Officers should be required to wear body cameras and when they are called out, they should be supervised, potentially by an RCMP officer,” said Swonnell in a written statement released by his lawyer.

Those named in the lawsuit have 21 days to respond.