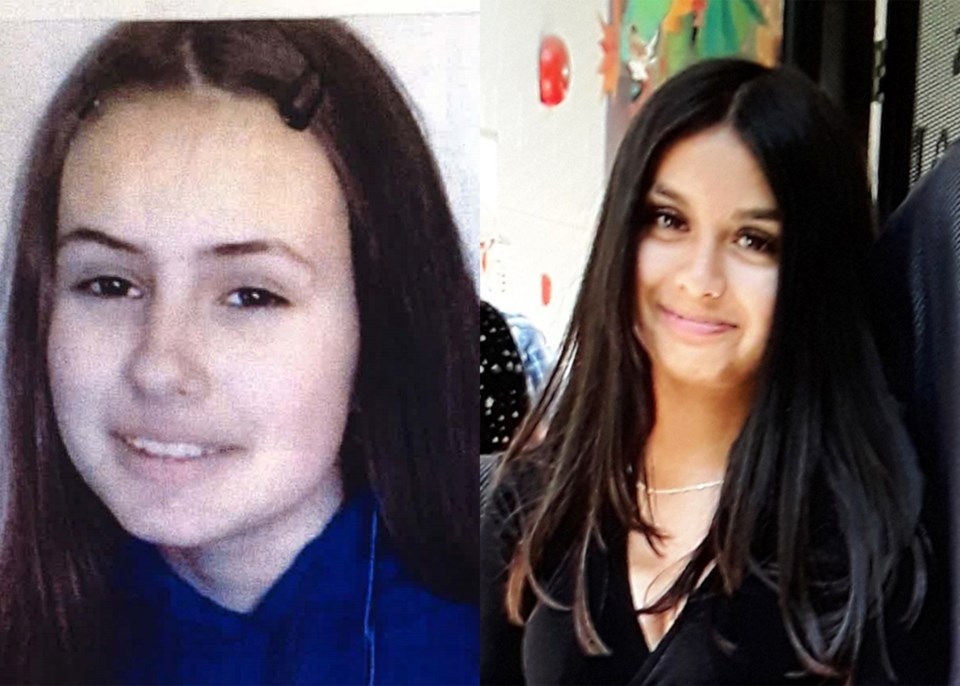 RCMP are searching for Kaitlyn Beaulieu, 12, of Port Coquitlam, and Sonja Craig, 13, of Coquitlam. Both went missing Wednesday afternoon (Sept. 25) and were last seen at the Coquitlam Centre bus loop.Coquitlam RCMP

Coquitlam RCMP are searching for two young girls who have been missing since Wednesday afternoon.

Coquitlam RCMP spokesperson Cpl. Michael McLaughlin said the cases are being treated as separate investigations but the two may be together.

“These two investigations started at the same time. They were last seen together in the same area of the bus loop and the information was that they were together,” said McLaughlin. “It’s somewhat unusual [to have two girls so young be missing] but not as unusual as you might think.”

Beaulieu is Caucasian with a slim build, brown shoulder-length hair and brown eyes, and stands about five feet tall, weighing 80 lb.; she has a mole over her left eyebrow. She was wearing a red hoodie over a red crop top, red sweat pants and black Champion running shoes, and was carrying a beige or grey backpack.

Craig is South Asian, slender with long brown hair, brown eyes and stands about four-foot-10 and weighs 90 lb. She was wearing a black hoodie, aquamarine blue Kappa track pants and black runners, and was carrying a grey Herschel backpack.

McLaughlin said several officers are helping out the detachment’s missing persons unit. “There has been quite a bit of progress but until we physically meet them and verify them as being OK, we will continue to investigate.

“We continue to ask the public if there’s anything they know about these girls, please let us know they’re OK. We’re getting a better idea of where they might be but these things are often difficult to determine until we physically see them.”

McLaughlin said investigators have had success in following up on some leads but can’t go into the specifics.

Anyone with any information on either girl is asked to call the Coquitlam RCMP non-emergency number at 604-945-1550.