With many coronavirus cases and deaths in Iran, a Tri-City Iranian group cancelled its Nowruz celebration and Fire Festival in Coquitlam, and is planning deliveries to people in quarantine
Mar 3, 2020 12:00 PM By: Stefan Labbé 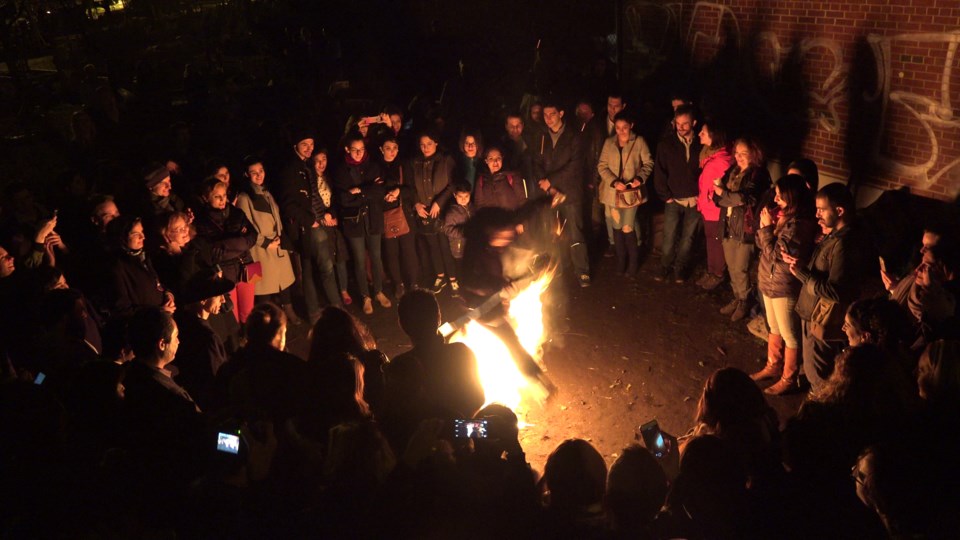 Chaharshanbe Suri, or the Festival of Fire, includes jumping over bonfires as a way of taking away negative energy, sickness, and other problems. This year, the Tri-City celebrations that usually bring in 6,000 people will be cancelled.WIKIPEDIA COMMONS

Organizers of the Tri-Cities’ annual Iranian New Years celebrations have cancelled all their events this month, citing the potential for transmission of the COVID-19 pathogen.

The decision comes on the heels of the Canada Public Health Agency’s request that all people entering Canada with a travel history in Iran voluntarily self-quarantine for 14 days.

On Tuesday, March 3, a ninth positive case of COVID-19 was confirmed by provincial health officials, this time involving a man in his 50s from the Fraser Health district — which includes the Tri-Cities — who recently returned from Iran.

The Festival of Fire, held every March 17, two weeks before the vernal equinox, is an ancient New Year celebration reaching back to Persia's Zoroastrianist roots. Last year, about 6,000 people attended the free event on the banks of Lafarge Lake in Coquitlam's Town Centre Park.

Over the last three years, the Tri-Cities Iranian Cultural Society (TCIS) has held the Nowruz Bazaar, a three-day market where businesses from across the Tri-Cities sell sweets, flowers and a variety of goods in the lead-up to the New Year celebrations. That event will also be cancelled, along with the group's senior club and Persian school

Behzad Abdi, chair of TCIS, said the decision to cancel the events came after extensive consultation with health officials in Canada and Iran.

“I spoke with two or three colleagues at a biomedical university [in Iran],” Abdi told The Tri-City News. “They told me it’s better you cancel it because there’s a lot of cases here.”

Hundreds of people in the Tri-Cities have also emailed, called and written to the group on Facebook expressing their concern should the event go ahead, Abdi said.

Iran has become a major hub in the spread of COVID-19, with more than 2,300 people confirmed infected and more than 75 deaths. Those numbers saw dramatic upticks in the past few weeks, triggered by a confirmed positive case of a woman in her 30s who returned from Iran to the Fraser Health region, provoking concerns there may have been exposure within the Iranian community here. Fraser Health, however, said it had contacted everyone who was thought to have possible contact with the woman and they are now isolated.

In British Columbia, health officials have attempted to be open about suspected cases while balancing the need for individual privacy but many Iranians — both here in Canada and at home — say Iran’s government has lost all credibility.

“The Iranian government, we don’t trust them at all,” said Abdi. “They couldn’t control it. They hide it from the public.”

With several cases across Canada now linked to travel from Iran, Abdi said his organization and the wider Iranian community in the Tri-Cities are not willing to take any chances.

At the same time the local group cancels the biggest Iranian celebration of the year, it is also mobilizing to provide support to any Iranian under self-quarantine across Metro Vancouver.

Yesterday, Abdi said the Tri-City group put out a call for volunteers to help those stuck at home to receive daily essentials, including food or soap — anything to make life more comfortable.

But before the 30 confirmed volunteers head door-to-door (there are another 150 ready to help), Abdi said he’s reaching out to health officials, looking to get some training for them so they take every necessary precaution.

“We want to make sure they’re protected,” said Abdi. “Just buy, pay through an email money-transfer and leave it at the doorstep. No direct contact.”