Coronavirus update: precautions but no panic

Some Coquitlam shoppers and clerks are wearing face masks in an effort to avoid illness
Feb 3, 2020 2:58 PM By: Diane Strandberg 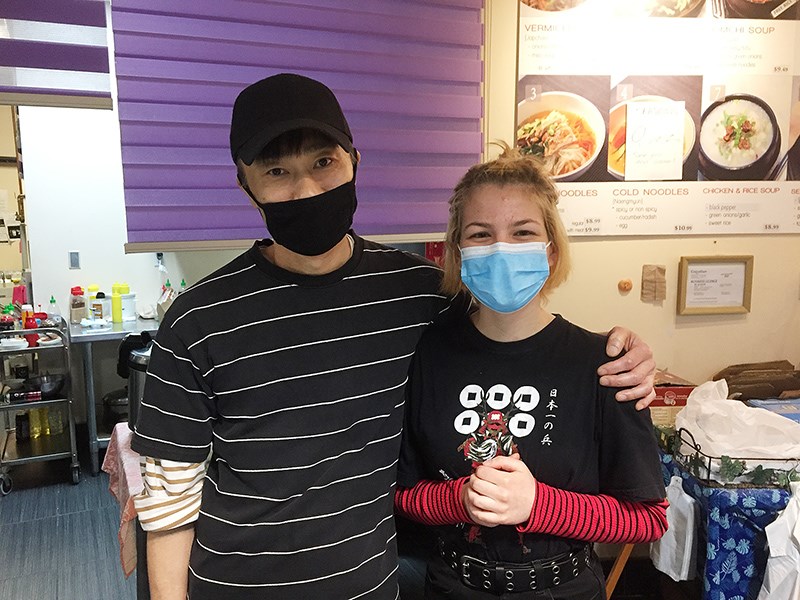 Keeping themselves and their customers healthy is the goal of Pinetree Grill co-owner Charles Hwang and an employee. The two, who work at Henderson Centre in Coquitlam, said they wore masks because of concerns about the spread of coronavirus.Diane Strandberg

Concerns among Tri-City residents about the novel coronavirus spreading to the region are most easy to see on the streets and in stores and shopping centres where some customers and store clerks are wearing face masks.

Last week, as the World Health Organization declared the outbreak a public health emergency and Canada’s fourth case was identified, the rumour mill went into overtime, according to some social media watchers, with B.C.’s Chinese community among those most worried.

“I don’t want to get sick,” said Charles Hwang, who said he asked his Pinetree Grill staff to wear face masks because he’s concerned about them, and is checking the news to keep up to date on the disease.

At Coquitlam Centre last Friday, two international students from Vietnam who are studying hospitality at Douglas College told The Tri-City News they were wearing facemarks while shopping “just to be safe,” although they don’t wear them on campus.

According to the latest reports, the new coronavirus has sickened more than 17,205 people worldwide in nearly two dozen countries, and it has killed 361 people in China. But as of Monday afternoon, there were no new reports of people diagnosed with the disease in Canada.

According to the Public Health Agency of Canada, the risk to Canadians from the disease is low.

A spokesperson from SUCCESS, an agency that works with new immigrants, including those from China who live in the Tri-Cities, said she is urging calm and sending special bulletins to staff, clients and the group's governance board.

“We are keeping them up to date,” said CEO Queenie Choo, who said people are inclined to “press the panic button” if they don’t have access to good information, so her organization is making an effort to get out the latest information and advising people to use good hand hygiene, and to seek medical attention if they are sick.

SUCCESS is also urging the public not to stigmatize individuals from Asia during this time of hyperawareness around the disease.

“I don’t think we should racialize this disease but [should use this time] as an opportunity to be united to combat the disease,” Choo said.

Efforts were being made Monday to get Canadians and permanent residents out of the Wuhan area in China, and were being told they could expect to be quarantined for two weeks.

The first two confirmed cases of the new coronavirus in Canada were reported in Toronto after a couple returned form a trip to China that officials said included travel to the Wuhan area, which is considered the epicentre of the disease. One patient was treated in hospital and released, the other was in self-isolation at home.

The next case was confirmed in B.C. and the most recent case was in London, Ont. Both of these patients had travelled to Wuhan.

Meanwhile, according to the Associated Press, the head of the World Health Organization said Monday in Geneva that it was working with Google to ensure that searches about the new virus turned up information from the U.N. health agency first, part of efforts to fight "rumours and misinformation" about the outbreak.