Letters were sent to parents at Archbishop Carney in Port Coquitlam and Maple Creek middle school in Coquitlam, stating that someone with a variant was at the school last week
Mar 2, 2021 5:53 PM By: Diane Strandberg 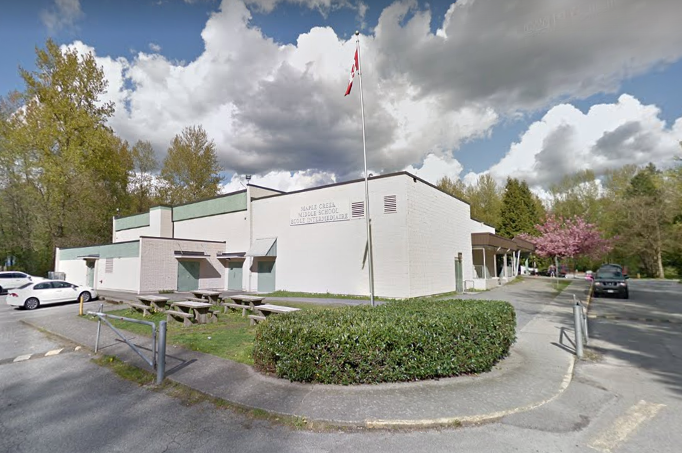 Fraser Health sent a letter to parents of children attending Maple Creek middle school, informing them that someone with a COVId-19 variant of concern was on school grounds Feb. 23. Google maps

A middle school school in Coquitlam and an independent high school in Port Coquitlam have been identified as having someone on school grounds with a COVID-19 variant of concern.

But details on what is being done or what type have yet to been explained by Fraser Health.

Yesterday, a notification letter about exposure to a COVID-19 variant was sent to parents whose children attend Maple Creek middle school in Coquitlam as well as Archbishop Carney Regional Secondary School, an independent school in Port Coquitlam.

According to the letter sent to parents, a person with a variant type of COVID-19 was at Maple Creek middle school on Feb. 23.

A similar letter was sent to parents at Archbishop Carney saying that a person with a variant type of COVID-19 was at the school Feb. 22, 23 and 24.

The letters state that the information is a general notification “and does not mean you are your family have been exposed to a variant type of COVID-19.”

“The person involved has been isolated; as such there is no chance of direct exposure at this time.

“However, a public health risk assessment is underway and the school community may receive further instruction," states the letter.

From the time public health learns of a confirmed case of COVID-19, it usually takes Fraser Health less than 48 hours to complete contact tracing, writes the health authority in the letter to parents.

Surrey schools have also been dealing with so-called variants of concern, requiring rapid testing of staff and students.

Fraser Health stated in a press release Tuesday afternoon that only close contacts for the cases need to be tested and have been contact. As well, the schools remain open.

The number of variants identified across B.C. has risen steadily over the last month as B.C. enhances its screening.

In a statement Monday, March 1, provincial health officer Dr. Bonnie Henry and Health Minister Adrian Dix revealed 42 new confirmed COVID-19 cases linked to variants of concern. That brings the B.C. total to 158, including 10 active cases. The B.1.1.7, or U.K. variant, make up 137 of those cases whereas the B.1.351, or South African variant, account for 21 positive tests.