More than 30 residents have been targeted in the scam, say Coquitlam RCMP, though many of the details of the ongoing investigation have not been released
Feb 5, 2021 4:26 PM By: Stefan Labbé 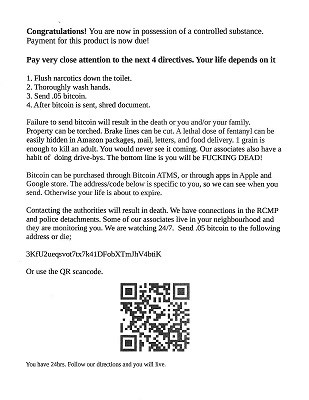 A scam involving a mysterious white powder and demanding bitcoin under punishment of vandalism and death has targeted over 30 residents across the Tri-Cities, new information from Coquitlam RCMP has revealed.

Mailed to peoples' homes, the letter requests the receiver send bitcoin by scanning a QR Code at the bottom of the letter before “bad things” happen to them. The letter threatens death, torching of property and even brake lines being cut.

It also threatens recipients with a "lethal dose of fentanyl" that can easily be hidden in food deliveries or Amazon packages if the recipient does not send 0.05 of the cryptocurrency. A single bitcoin is currently valued at $49,000 Canadian dollars, meaning the scammers were calling for a transfer of just under $2,500.

WHAT WAS THAT WHITE POWDER?

Since it was first reported to police Jan. 25, Coquitlam RCMP has tapped internal and external laboratories, ultimately finding the powder in their possession was “not toxic.”

“However, we cannot forecast the potential that there is a different substance in each letter,” added an RCMP spokesperson in an email.

Anyone receiving the letter is asked immediate put the letter, envelope and whatever else is inside into a sealed sandwich or freezer bag. Sanitize the area where you opened it, wash your hands and call the RCMP, recommend police.

IS THERE REALLY A CONNECTION TO BIKER GANGS?

When the Tri-City News inquired about a return address linked to a Hell’s Angels Clubhouse, the spokesperson said RCMP is “investigating every potential reasonable avenue” but said she could not comment on the steps in an active investigation.

WAS IT A HOAX?

Whether the makers of the letter were ready to carry out violence is not clear. But the QR code attached to the letter does link to a bitcoin payment service and RCMP “strongly advise against anyone scanning this QR code.”

“Regardless of how we characterize it, it is important for everyone to know this is happening and not send money or Bitcoin as the letter requests and to contact police,” wrote the RCMP spokesperson.

Similar scams involving white powder have been reported in Peel and Etobicoke, Ont., where police determined the powder was icing sugar, according to December 2020 report by the CBC.

— With files from Diane Strandberg