The investigation, carried out by the Independent Investigations Office of BC, found police were justified in their use of force in an encounter that ended when officers fired three shots into Din’s cheek, head and chest.
Sep 24, 2020 5:28 PM By: Stefan Labbé 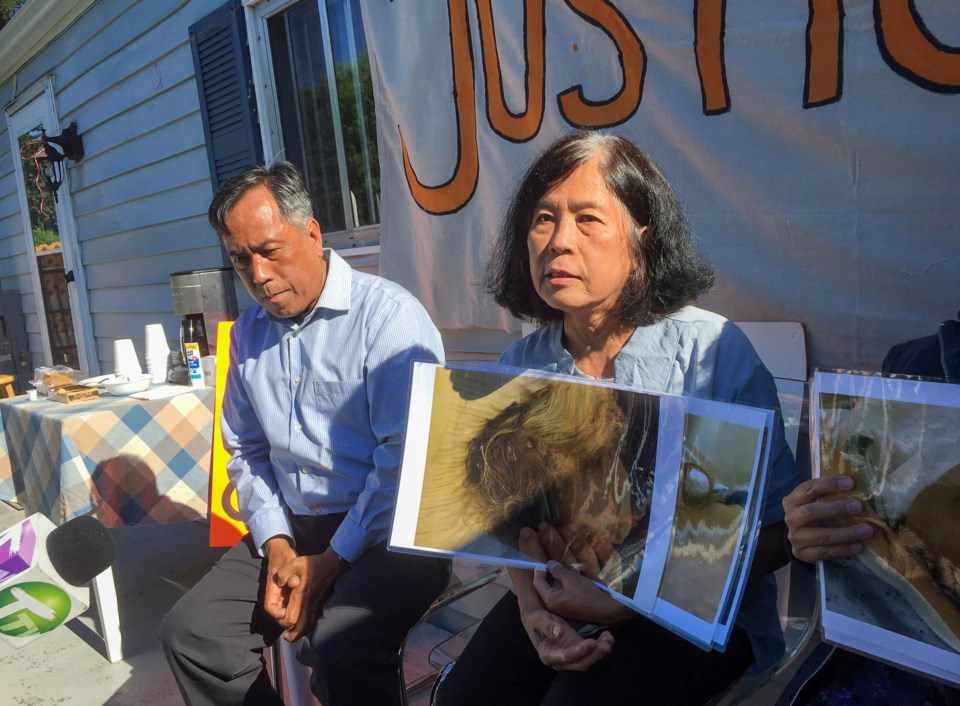 Hla Din, older sister of Kyaw Naing Din, describes how she was just minutes too late to assist her brother Kyaw Naing, who died in an encounter with the Ridge Meadows RCMP, Aug.11, 2019. The family says they were promised several dates for a file review into the case, only to have it repeatedly delayed by the Independent Investigations Office.DIANE STRANDBERG/TRI-CITY NEWS

British Columbia’s independent police oversight body will not refer charges to the Crown in a decision that dismissed a Coquitlam family’s allegations over how RCMP officers handled evidence in the shooting death of their brother Kyaw Naing Din in Maple Ridge last summer.

The investigation, carried out by the Independent Investigations Office of BC, found police were justified in their use of force in an encounter that ended when officers fired three shots into Din’s cheek, head and chest.

The results of the investigation come over a year after the shooting, at a time of heightened scrutiny on police conduct following several high-profile deaths of Black and Indigenous people at the hands of police. Family of Kyaw Naing Din have made allegations regarding how evidence was handled in the case, and that justice had too long been delayed.

The Sept. 24 report notes officers arrived at the man’s Maple Ridge home in the afternoon of Aug. 11, 2019, after his sister, Yin Yin Din, called authorities saying he was “angry, upset and suffering from clear delusions,” said chief civilian director of the IIOBC Ronald J. MacDonald at a press conference Tuesday.

Police responded to reports of “a domestic in progress” after Yin Yin called 911, telling Ridge Meadows RCMP her brother had threatened to assault her, suffered from mental health issues and needed to be taken to the hospital because he was off his medications.

“It seemed to be a fairly routine situation, where they pick the guy up and take him to hospital,” said MacDonald.

When Kyaw Naing Din refused to leave his room at the request of his sister, RCMP officers called in two paramedics to apprehend Din under the Mental Health Act as nobody appeared to be at risk of harm, according to the investigation.

Still, Din refused to leave his room. After the sister made several attempts to communicate with him, Din became increasingly abrupt and angry — “almost shouting at her,” one of the officers at the scene told the IIO.

At that point, officers said the sister mentioned Din had a three-inch knife with him, but never suggested he would attack someone with it.

The officer then spent another 10 to 15 minutes trying to coax Din out of the room, but when that failed, the officer called in another two officers with a Taser.

One of the paramedics remembered sister Yin Yin repeatedly saying, “wait until my family member comes.”

“Let’s not have everybody and their dog watching us arrest him, possibly Taser him, depending on how compliant he is,” said one paramedic, agreeing with the police decision to not to wait for the family members.

In retrospect, that decision was reasonable, MacDonald said, as there was no reason to suggest the man would be violent at the time.

“There isn’t always a right and a wrong in these decisions,” MacDonald told the press Thursday.

When the officers opened the door, Din was said to be in an “aggressive ‘bladed’ stance." They shut the door quickly and designated one officer to take on the role of “lethal overwatch,” a standard precaution mandated in RCMP policy and training during physical confrontations.

When Yin Yin once again asked the officers to wait for her sister, one of them told her, “Okay, we don’t need to wait for your sister because we are not going to shoot your brother. We know how to handle people like your brother, okay?”

From all accounts, what happened next happened very quickly. One paramedic said she witnessed a struggle at the door as the police tried to enter before a “big, heavy metal disk” — which turned out to be a 2.5 kilogram barbell — flew across the room and struck the opposite wall.

An officer shouted “Taser, Taser, Taser!” But when the device was deployed, one of the probes was found to have gotten caught on Din’s clothing, rendering it ineffective.

Din came at the officers trying to stab and slash them, according to their testimony. That’s when one of the officers fired three shots: one lodged into Din’s cheek and another passed through the left side of his head, likely lodging into his chest.

Both paramedics said Din’s blood loss was “not survivable.”

In reviewing the shooting, the investigation’s official report found the forensic evidence was “entirely inconsistent” with allegations made by sister Yin Yin Din, who – according to the report - had alleged police may have “planted” evidence, that her brother was not in possession of a knife at the time of the shooting and that he was “simply sitting passively in his chair when he was Tasered and then shot.”

As a result, Yin Yin Din's allegations were found to be unreliable, said the report.

In his report, MacDonald wrote that it was likely Din’s sister had confused witnessing the first encounter between her brother and police with the second one in which he was shot. Testimony from paramedics placed the sister in an impossible position to be able to see into the room at the time of the shooting.

“The reliability of the police does not appear to be contrived,” wrote MacDonald in the report, adding that if the officers were going to lie about the use of the knife, their stories would have all lined up and they wouldn’t have checked for wounds immediately after.

The investigation found officers were justified in their use of lethal force against Din as the officer who fired the shots was trying to prevent lethal injuries to himself or other officers.

But in an interview with sister Yin Yin Din Thursday, she told the Tri-City News that she disagreed with the report’s conclusions.

Yin Yin Din said the family is now preparing to forward the case to the Civilian Review and Complaints Commission for the RCMP in Ottawa with the hope it will one day end in charges.

“We will challenge the decision.”