The proponents behind a massive redevelopment being proposed for Port Moody’s downtown are determined not to let the area go completely fallow until shovels hit the earth.
Aug 8, 2020 7:00 AM By: Mario Bartel 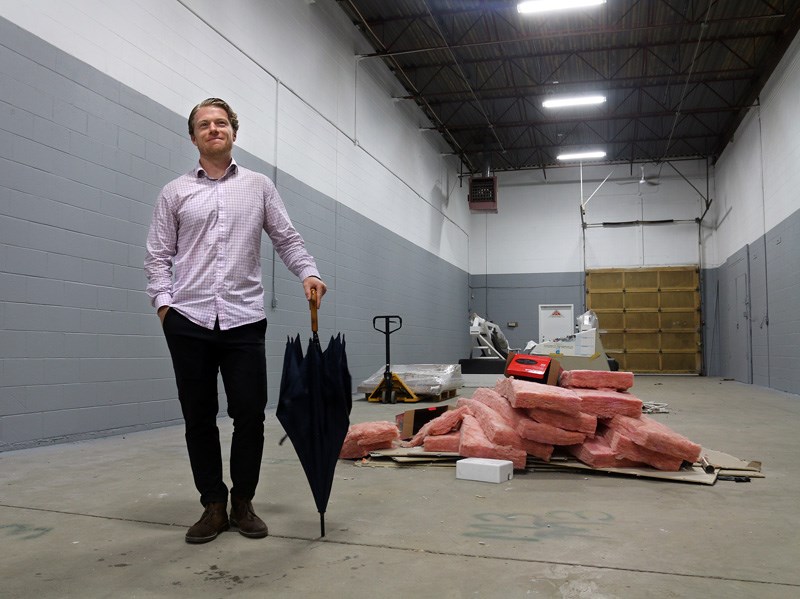 John Abraham, of PCI Developments, stands in a vacant warehouse space in Moody Centre that is being converted to a gym to be used by a kids' basketball group as the area awaits redevelopment.MARIO BARTEL/THE TRI-CITY NEWS

The proponents behind a massive redevelopment being proposed for Port Moody’s downtown are determined not to let the area go completely fallow until shovels hit the earth.

Artist studios and even a basketball court are being constructed in warehouses and light industrial space left empty as tenants have moved out in anticipation of new construction that could transform 20 acres next to the Moody Centre SkyTrain station into a mixed-use neighbourhood of condos, shops, offices and even a satellite campus for a post-secondary institution.

Tim Grant, vice-president of development at PCI Developments, said it’s important to keep the area active and residents engaged in its future.

“Inaction isn’t an option,” he said during a recent walking tour along Spring Street that will become the project’s spine, a pedestrian- and cycling-friendly high street flanked by pocket parks and public gathering spaces between the podiums of a series of mid- and high-rise towers up to 36 storeys. “Everyone expects change, but we have to stabilize the area.”

PCI is one of nine developers and property owners, including Beedie Living, Anthem and Woodbridge Homes, along with TransLink and several families, who’ve come together to pitch a master plan that would bring more than 4,100 new homes to the area, as well as commercial and office components that could create jobs for about 2,000 people. The consortium recently submitted its formal application for amendments to Port Moody’s official community plan (OCP) that would allow the project to proceed.

While the application is a significant step forward in a process that’s been percolating since the OCP was last updated in 2014 and the Evergreen SkyTrain line opened in December 2016, it really started to take shape during more than two years of meetings and workshops with the city, community members and stakeholders.

The stakes are high.

“Port Moody has so much potential,” said Katie Maslechko, the senior development manager for Beedie Living. “People want to come here. They want to see increased job opportunities and places to live.”

Getting the project realized won’t be easy, admits Grant. Not only will the consortium have to win over city councillors that are wary of dense development and residents concerned about increasing traffic and pressures thousands of new neighbours will put on existing amenities like parks and schools, the group will also have to maintain its united vision even as speed bumps appear.

“As long as we have a lens on the process, the group is committed,” Grant said.

“It’s unique that we’re all working together because this is a special opportunity,” Maslechko added.

The interim initiatives are part of that opportunity, said PCI’s John Abraham. Not only do they occupy spaces that would otherwise be left vacant and prone to vandalism, they send a message to the community about the group’s commitment.

The basketball gym is being constructed in partnership with the Vancouver Sports Club that runs grass roots basketball programs for underprivileged kids across the Lower Mainland and into the Fraser Valley. The studios are being made available to local artists for as little as $30 a month.

Abraham said his email was inundated with as many as 60 requests for the approximately 15 spaces as soon as word got out.

“We’re just trying to come up with ideas that are good for the community and makes use of space that isn’t viable,” Grant said.

And while the transition won’t be easy on most of the businesses that remain in the area on short-term leases, like auto repair shops, fitness gyms and doggy daycares, it’s not out of the question some could find a place in the new Moody Centre, said Maslechko.

“These uses are quite transferrable.”

Especially at the eastern end of the neighbourhood, towards Electronic Avenue, added Grant, where plans anticipate the construction of some light industrial and innovator spaces.

“It will be suitable for people to come back in,” he said.

1671
Letter: New Coquitlam residents need to adapt to living on the edge of wilderness
884
‘What are they waiting for?’ asks Coquitlam parent worried about long wait for school isolation letter
833
Dentists, midwives and more approved to assist in B.C. vaccination clinics
751
Parent says Port Moody minor hockey not giving a full account of its COVID cases
710
New garden centre hopes to take root in Port Moody