District Parent Advisory Council says district should be transparent about funding from outside sources; teachers doubt that program name change, website will quell public concerns
Oct 24, 2020 7:30 AM By: Diane Strandberg 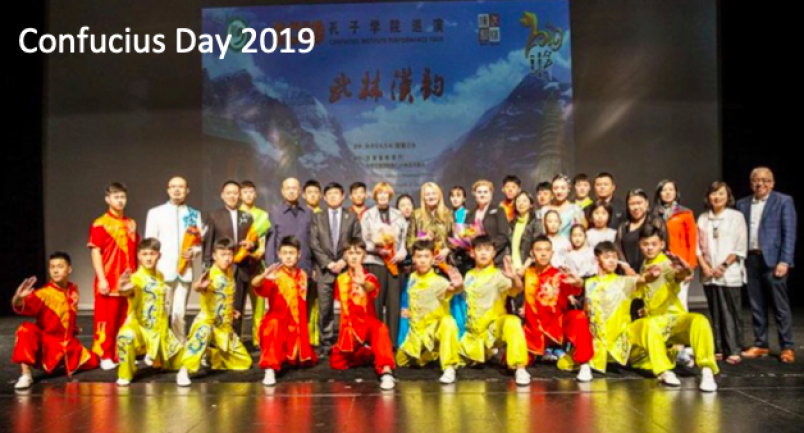 A photo from Confucius Day celebrations in 2019. School District 43 has a long-running Confucius Institute program offering language and cultural programs after school, and grants to support Mandarin language classes in some elementary, middle and secondary schools in Coquitlam.SD43

A long-running School District 43 cultural and language program that benefited from grants from the Chinese government over the past decade has a new name and website.

But Coquitlam teachers are skeptical the changes will resolve concerns from the public while parents are calling for transparency regarding Confucius Institute funding.

Neither Coquitlam Teacher Association president Ken Christensen nor Marvin Klassen, chair of the SD43 District Parent Advisory Council criticized the program directly, but both want assurances the language and cultural program funded from China is beneficial for the district.

In an email Friday, the CTA’s Christensen stated that while he has seen “no direct evidence of any malpractice by the employer or the Confucius Institute,” he doubts the decision by trustees to reject a call to hire an outside body to evaluate SD43’s relationship with the institute “will provide much comfort.”

“I am not confident that changing the name and assigning the work to a third party is going to resolve the issue,” Christensen said, adding that while he’s “no apologist for Chinese government action” he also doesn’t “ascribe malice to the Chinese people”

But Christensen did not criticize trustees’ decision to vote against a motion by Coquitlam trustee Jennifer Blatherwick to have an independent evaluation of the program, now called the Chinese Language and Culture Institute, formerly the Confucius Institute.

Meanwhile, DPAC chair Marvin Klassen said that while parents haven’t expressed concerns, DPAC is willing to have “an open dialogue with the membership if they so wish.”

“We are very concerned with current trends towards a culture of less transparency. DPAC supports more transparency and independent oversight over public institutions not solely to criticize, but also to validate and confirm good governance of public administration through independent school boards within our education system,” Klassen stated in an email.

He added that outside sources of funding “need to be treated with the highest level of transparency.’

But trustees believe the program is already scrutinized by financial auditors and don’t support an outside body looking into the relationship between SD43 and the Confucius Institute.

The Confucius Institute was established in Coquitlam in 2009 and provides Mandarin language and cultural programs to about 440 students, including adults and children.

Last year, the institute provided $352,000 to the district, including $23,000 in grants for supplies to elementary, middle and secondary schools for Mandarin programs taught by B.C. certified teachers.

Over the years there has been little to no protest mounted by SD43 parents against the program, compared to the Toronto School District School Board, which in 2014 cancelled its agreement amidst concerns raised by parents and groups, including presentations during school board meetings.

Here in SD43, there have been no such public presentations at school board meetings, and lack of parents concern was raised by board chair and Anmore/Belcarra trustee Kerri Palmer Isaak, who said she has only received four emails, two from the same person.

DPAC’s Klassen admitted “there are a variety of views on both sides of this issue within the region covered by SD43,” and while he’s open to having a dialogue about it, no one has yet raised it as a concern with the parent group.

However, a petition with 6,500 signatures opposing the programs was sent to the district and Port Coquitlam Mayor Brad West has been supportive of a Canadian documentary filmmaker who was in Coquitlam this year with a film critical of the district’s Confucius Institute program.

The district maintains the government has no influence but the Globe and Mail has recently published articles suggesting Chinese government influence, including an assessment the district is supposed to fill out with information about local political attitudes abut the institute.

The district has disputed the claims around the political assessment, telling the Tri-City News that SD43 isn’t required to fill out the assessment as part of its annual grant application.

The original agreement between SD43 and the Confucius Institute, dated 2011 states that the institute will contribute $150,000 in start up funds to the district plus 3,000 volumes of Chinese books, teaching materials and audio-visual materials.

The current agreement provided to the Tri-City News has no details but welcomes SD43 to the Chinese International Education Foundation in which the South China Normal University will coordinate the Confucius Institute agreement.

Notably, the Sept. 16, 2020, welcome letter does not use the district’s new name for the program, but states the Confucius Institute will continue to operate, though under the aegis of the South China Normal University.

“We hereby pledge our unwavering support for the sustainable and high-quality development of the Confucius Institute in Coquitlam,” the letter to School District 43 states.

Meanwhile, Mandarin language programs continue to be popular, with more families seeking space for their children in the Mandarin kindergarten program at Walton elementary than there are spots available.