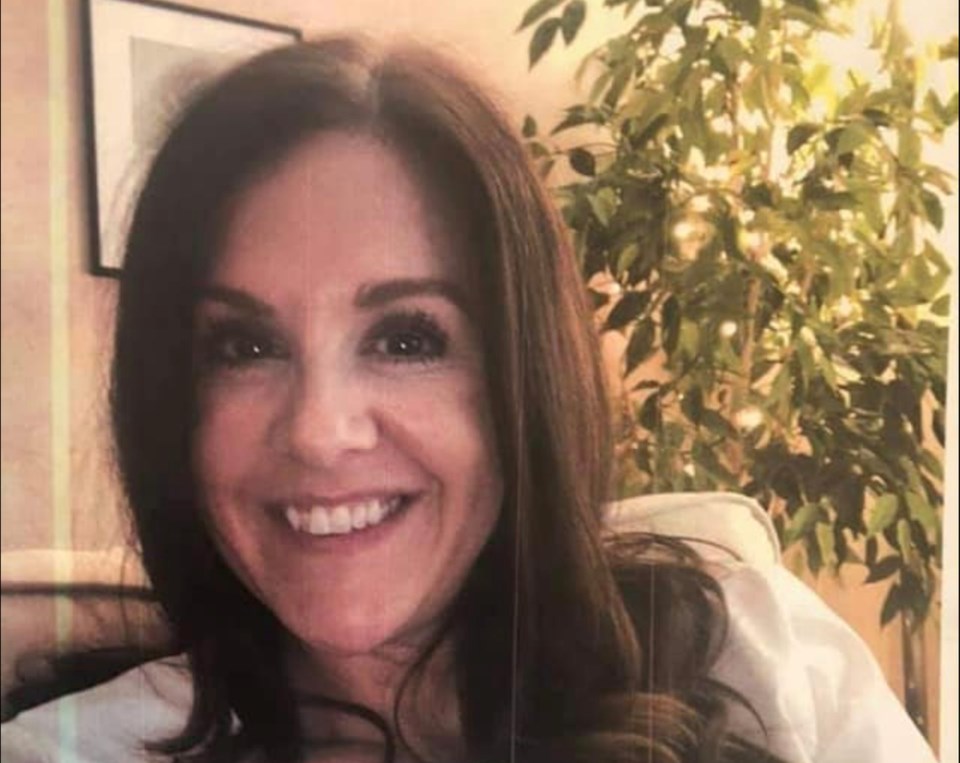 Family and friends of a Port Moody woman who has been missing for seven days will continue to “explore all avenues” in the hopes of finding Trina Hunt, whose disappearance last week generated a massive search involving police, volunteer search and rescue teams as well as friends and neighbours.

As of Jan. 25, Port Moody police had no new information to report.

But the family and friends of Trina Hunt said they would continue their search efforts as well as support the family of the 48-year-old woman who was last seen Jan. 18.

“It has been one week since Trina disappeared. We are dedicated and determined to bring Trina home. Our focus is supporting Trina’s husband, parents and brother through this unprecedented time while continuing to explore all avenues that may lead to the whereabouts of Trina,” stated the Help Find Trina Hunt Missing in Port Moody Facebook group.

The group, administered by Stephanie Ibbott, also said that a video message for the public and media to be aired Monday was called off after consultation with the Port Moody Police Department (PMPD); however, the post thanked those who participated in an online vigil for Trina Hunt on Sunday.

Trina, you are the light in so many people’s lives. There is no darkness when you are with us. I truly hope that we will be able to bake (and eat!) Macarons together soon. Come home. #comehometrina #findtrinahunt #missingperson #candlelightvigil pic.twitter.com/z81XSubVQV

“The community came together yesterday, to share photos of candles lit in Trina’s honour. That brought her family comfort and hope, and we thank all of you for that,” the post further stated.

Meanwhile, Port Moody police are not providing any new information, except to say the investigation is “active and ongoing.”

In a statement to the Tri-City News, Staff Sgt. Brad Sheridan said there are no plans for a press release or press conference at this time and PMPD “will not be discussing future investigational steps.”

However in earlier statements last week, the PMPD said that members of the Coquitlam Search and Rescue “stand ready to assist us,” and that Trina’s family have been cooperative and “foul play is not suspected.”

“Trina’s family has been completely cooperative with our investigators and foul play is not suspected. We thank them for their support of our ongoing investigation,” Staff Sgt. Brad Sheridan stated.

The community effort for Trina Hunt spanned over four days, beginning Jan. 19 with Coquitlam Search and Rescue combing the area near her Heritage Woods home, and an RCMP helicopter and a canine unit contributing to the search effort.

Hunt’s disappearance spread widely across several online community boards and galvanized people from across the Lower Mainland and as far away as Vancouver Island to join the search.

Christina Gower, who helped some family members manage flood of information, acknowledged that the search effort was extensive. “Everyone is out looking.... It’s just happening really fast,” she told the Tri-City News.

Gower said Hunt’s disappearance is “an absolutely total surprise to everybody” and that “we’re completely baffled.”

HAVE YOU SEEN TRINA HUNT?
She went MISSING from her residence in Port Moody, BC, Canada on JANUARY 18, 2021.
We are seeking the public’s help in bringing her home.#COMEHOMETRINA#FINDTRINAHUNT#MISSINGPERSON#MISSINGPERSONS #MISSINGINCANADA #PORTMOODY #VANCOUVER #VANCOUVERBC pic.twitter.com/OeRkuFsHYU

On Jan. 21, Port Moody police said the community ground search would be put on hold, with the volunteer command centre wrapping up, but police also put out a call for security and dash cam footage captured between 6 a.m. and 5 p.m. on Jan. 18 — the day Trina Hunt went missing.

In a message from family shared by Port Moody police, Hunt is described as “a beautiful wife, daughter, sister, auntie, cousin and friend.”

“We continue to hope through the incredible efforts of the Port Moody Police Department that she will be brought home soon,” they wrote.

Police describe Hunt as 5’4” inches tall and 120 pounds. She was last believed to be wearing purple shoes and a The North Face black, puffy down jacket, with a green collar.

Trina Hunt was last reported seen Jan. 18 at around 6 a.m. at her Heritage Woods home when her husband left for work. When he returned, she was nowhere to be found, prompting a call to police, Sgt. Morrison said.

If you have information regarding the whereabouts of Trina, please contact the Port Moody Police Department at 604-461-3456.

— with files from Stefan Labbé and Mario Bartel