Samer Aleid's family had to leave their home in Damascus, now they are making a new life for themselves in Coquitlam
Aug 26, 2016 10:24 AM By: Diane Strandberg 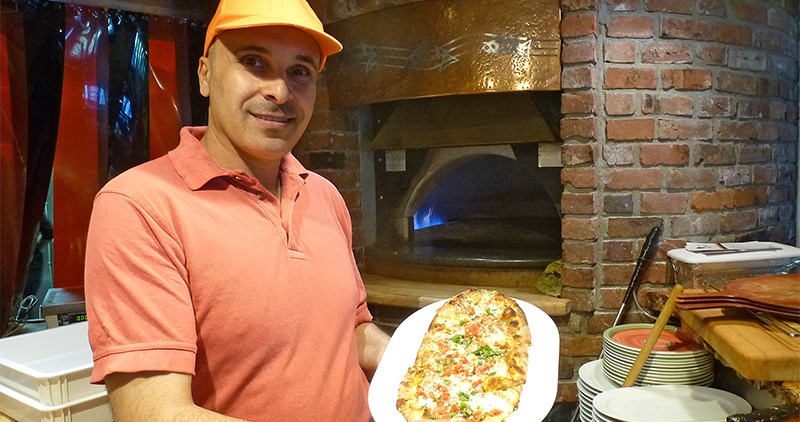 Samer Aleid making pizzas at Pasta Polo Restaurant in Coquitlam. Aleid and his family are originally from Syria and have been in Canada for seven months.Diane Strandberg

It's hotter than a steam room outside but that doesn't seem to worry Samer Aleid as he makes pizzas near a wood oven fired up to about 370C.

His smile is large as he hands over a delectable looking pizza chock full of cheese, meat and vegetables to a passing waitress.

Not long ago, Aleid was making Arabic food in his hometown of Damascus, Syria, but civil war put an end to that. Now he works as a pizza chef at Pasta Polo Restaurant in Coquitlam, which is owned by well-known restaurateur, Fred Soofi.
"Too much war, it was not safe, too much shelling, I was afraid for my wife and children," recalls Aleid, who left his country about three years ago for Lebanon.

Taking a seat in a comfy booth, Aleid's frown quickly returns to a smile. Clearly he's happy to be working, and in a restaurant, his chosen career.

It was seven months ago that Aleid arrived in Coquitlam with his wife and two children, a girl, 8, and a boy, 7. Sponsored by the St. Clare of Assisi Catholic Parish, the young family quickly settled down in the Cottonwood area of Coquitlam, and their children started going to Roy Stibbs elementary school.

But simply sitting around didn't sit well with the energetic Aleid and so members of the parish sponsorship committee reached out to Soofi.

It was a natural fit, the two say. For one thing, Aleid has a fairly high level of English language skills, and he knows how to work with food, having been employed in restaurants in both Damascus and Lebanon.

And Soofi, an immigrant from Iran, quickly recognized a hard-working, energetic man, who was not unlike himself when he first arrived in Canada 40 years ago.

"He is a good positive worker, and I understand that culture," Soofi said.

He was happy to give Aleid a chance and, after a month, is happy with his decision.

"He's one of my best people," Soofi said. "I expected him to be disoriented. It's not like that, he's so appreciative, so curious about Canada and wants more information."

Soofi hopes that by telling his story, he will encourage other employers to reach out and hire newcomers.

"We should learn more about those cultures. We should be more tolerant and help out where we can," Soofi said.