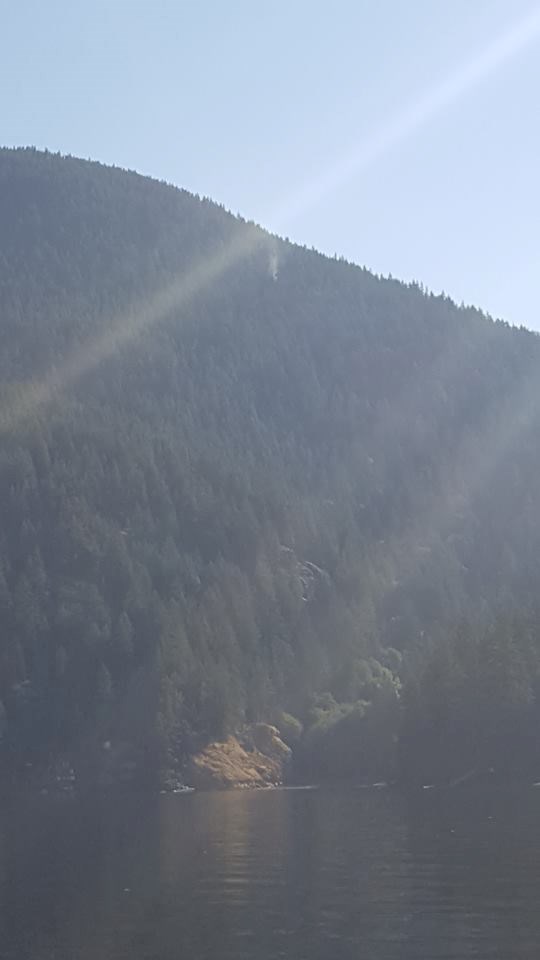 Smoke is visible from a smouldering fire on the Dias Vistas trail. It took six hours to put out the fire that was likely set by a careless person walking or camping on the trail above Buntzen Lake.Sasamat Volunteer Fire Department

It was likely a careless toss of some smoking materials into the woods Monday that led to a smoldering fire on the Diez Vistas trail that took 11 firefighters six hours to extinguish.

The incident is a cautionary tale for hikers heading into tinder dry forests, says the Sasamat Volunteer Fire Department chief whose team was called out to the fire at 8:40 a.m. on the last day of the BC Day long-weekend.

“It shocks me how stunned people are,” commented Jay Sharpe, who said the fire could only have been started by a careless gesture from someone walking on the trail because there hasn’t been any lightning in the area. It is possible that someone may have started a campfire on the trail too, but by the time the team arrived the source of the fire was impossible to find.

A team of nine volunteer firefighters headed up the trail while other members of the Sasamat team supported the efforts, including supplying water to the crew who had to tote it up the trail to put out the fire.

“The problem with smoldering fires is that that they can grow under ground,” Sharpe said, noting that it was lucky that it was a windless morning otherwise a stiff breeze could have flamed the flames and caused an even bigger blaze.

As it was, the fire was burning a couple of feet in the ground and had spread over a 20 foot diameter down the cliff.

“The fire was on a very steep slope, and some of it had tumbled it down.”

He credits the group of hikers that spotted the blaze for calling 911 so that the fire could be put out. The group also tried to stamp out the smoldering fire.

“The hiker said they saw some flames… 100% they did a great job,” Sharpe said.

His 45 member team is on high alert for fires and the fire rating is now extreme, Sharpe pointed out.

The Diez Vista trail is a popular trail above Buntzen Lake, it is recommended for experienced and fit hikers only. A smoking ban is also in effect.