Dr. Charles Best latest school added to the list of schools with recent COVID-19 exposures
Nov 30, 2020 10:54 AM By: Diane Strandberg 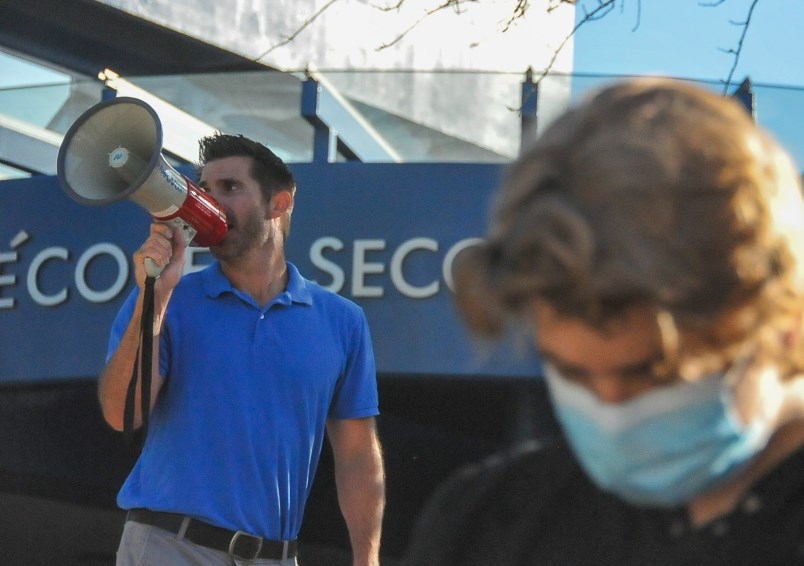 Vice-principal Joel Nelson gives instructions over a loudspeaker on new physical distancing protocols to stem the transmission of COVID-19 outside Dr. Charles Best secondary on the first day of school, Sept. 10.Stefan Labbé

Three Coquitlam high schools are under active monitoring for COVID-19 as the BC Centre for Disease Control reports teens aged 15 to 19 having the highest positivity rates among all age groups in the province.

The data reported for the week of Nov. 15-21 on BCCDC’s website, shows teens in this age group as having a positivity rate approaching 10% in the province, compared to 5% for children 0-9 years. For adults aged 20-39, the next highest, the rate was 9% while seniors 80+ have seen their rate of test positivity climb to 7%, from 3% in September.

Positivity rates are derived by the number of COVID-19 test positives per 100,000 of population.

And while the information is from several days ago, it mirrors the most recent school exposure notices posted on the Fraser Health web portal, where currently five Coquitlam schools — three secondary, a middle and elementary school — are reportedly under active COVID-19 contact tracing and monitoring.

An exposure as recently as last week has been reported at Dr. Charles Best secondary school while additional dates were added to exposures at Centennial, Pinetree and Summit middle school in the week of Nov. 15 and 21.

At Leigh elementary, exposure dates of Nov. 16 and 17 continue to be listed on the Fraser Health web portal.

Keeping track of school exposures has become more challenging in recent days as additional dates are added to schools and it’s not known whether it’s another individual who has tested positive for COVi-19 on the school grounds during their infectious period or an additional date added for a previous case.

Still, it appears that the virus continue to circulate in the Tri-Cities, with a weekend update of exposures expected today, Monday, Nov. 30 for the reporting period Friday through Monday.

The number had once been initially been reported to be higher— 941 on Nov. 24 —but that figure was later revised to be only 706 because there had been a data error. The previous one-day record, after the data revisions, was 887 on Thursday, Nov. 26.

Health officials are closely watching the numbers to see if restrictions have had a dampening effect on COVID-19 cases, particularly in Fraser Health, the Tri-Cities’ health district.

Fraser Health has consistently had the highest case count in B.C., but numbers in other parts of the province have been rising and it remains to be seen if numbers here have been dropping while positive cases have risen elsewhere.

However, the closely-watched percent positivity (MSP only) remained elevated Nov. 15-21, the most recent week available at 11% in FHA compared to at 8.5% provincially.