Port Moody council will ask the Metro Vancouver board to change the land use designation of the Flavelle mill site on the city’s waterfront from industrial to general urban following a lengthy public hearing Tuesday.
Jul 27, 2017 3:27 PM By: Mario Bartel 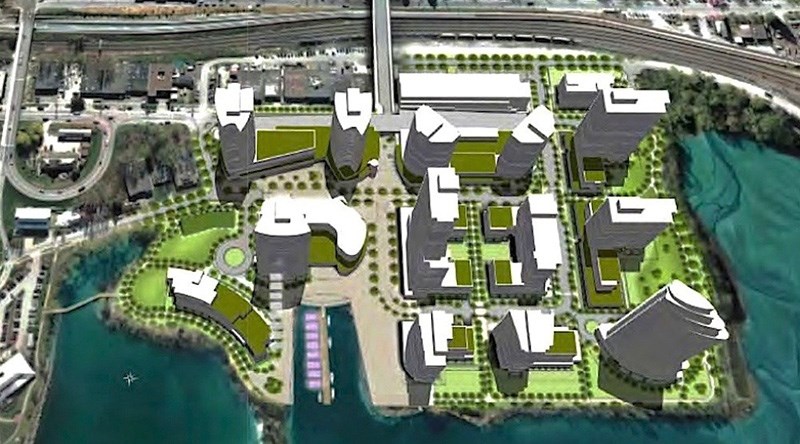 CONTRIBUTED PHOTO A conceptual rendering of what the Flavelle sawmill site could become by the time it is fully-developed in about 20 years.

Port Moody council will ask the Metro Vancouver board to change the land use designation of the Flavelle mill site on the city’s waterfront from industrial to general urban following a lengthy public hearing Tuesday.

At the meeting following that hearing, council gave third reading to a bylaw amendment to its official community plan that would allow the 11.9-hectare property to be redeveloped.

The property’s owner, Flavelle Oceanfront Development, is proposing to turn the mill site, which has been a part of Port Moody’s waterfront for more than a hundred years, into a high-density, mixed-use neighbourhood that could become home to up to 7,000 residents.

According to its proposal, those people would live in 3,397 units comprised of condos and townhouses in 11 towers ranging from 16 to 38 storeys and an eight-storey mid-rise building. As well, there would be 75 live-work units and 60 to 70 rental apartments in a low-rise building. The project would also include retail, office and light industrial spaces that the proponent says could create about 1,130 permanent, full-time jobs. A hotel and congregate care facility could also become part of the site if there’s market demand.

Flavelle is also proposing to dedicate almost a quarter of the site to create public park and open space, including a boardwalk along the shore of Burrard Inlet that links to Rocky Point Park.

Council’s decision to move the plan forward another step came after a public hearing that lasted almost two hours. Most speakers expressed support for the site’s redevelopment, which Flavelle first proposed in 2015. Since then, the city and company have had numerous consultations with the community, including open houses, information meetings and site tours.

Blaire Chisholm, the vice-president of Brook Pooni Associates, the firm employed by Flavelle to manage the project’s public engagement process, said it has had close to 2,000 conversations with residents over the past two years.

“People want access to the oceanfront,” Chisholm told council. “They want to live and work at that site.”

“I’m really, really impressed with the work that’s been done,” she said.

But she cautioned the project is far from a done deal.

“I think there needs to be further conversations,” Dilworth said, referring to some concerns that were raised during the public meeting about the placement of buildings and the extent of public access to the waterfront.

Count. Rob Vagramov said there should be more public space along the development’s waterfront, suggesting that could be achieved by increasing its density.

“If you want townhomes, this is not the place,” said Vagramov, who was the only councillor in attendance to vote against third reading, although he did vote to request Metro Vancouver's redesignation of the property. “We are so close to getting a full consensus on this.”

Mayor Mike Clay conceded Flavelle’s proposal still faces “a ton of challenges” but he said anything is an improvement on the site’s current industrial use.

Chisholm called taking the request to change to the property’s designation to Metro Vancouver “a major milestone for our project” but noted it will still be two to four years before any construction can begin, and more than 20 years before it’s completed.