A bylaw that would amend Port Moody’s official community plan (OCP) to allow the redevelopment of the Flavelle sawmill property will go to a public hearing on July 25.
Jun 29, 2017 2:57 PM By: Mario Bartel 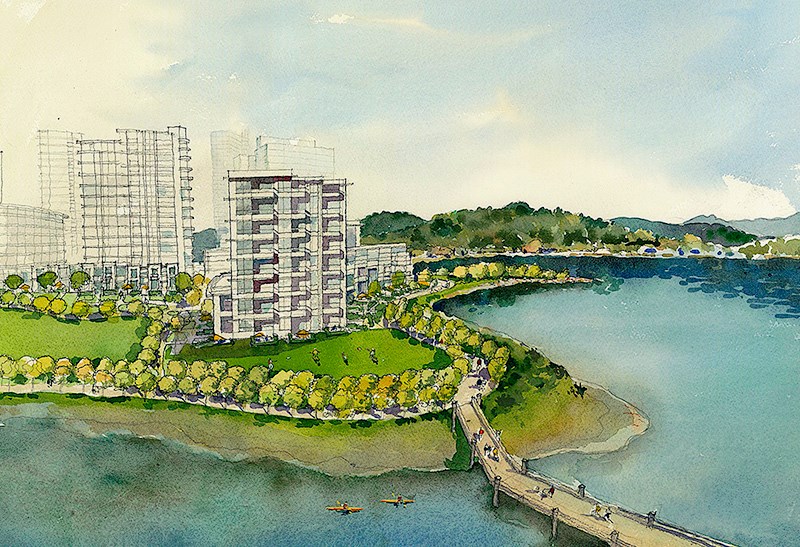 PHOTO CONTRIBUTED A rendering of what the new development on the Flavelle sawmill site could look like.

A bylaw that would amend Port Moody’s official community plan (OCP) to allow the redevelopment of the Flavelle sawmill property will go to a public hearing on July 25.

A proposal by Flavelle Oceanfront Development would transform the old sawmill that has been a fixture of the city’s waterfront for more than a century to a neighbourhood that could be home to up to 7,000 people and employ more than 1,100 in offices, shops and light industrial spaces.

Most of the residents would live in 11 condo towers ranging from 16 to 38 storeys and one eight-storey mid-rise building. There would also be a number of live-work units and 60 to 70 rental units in a low-rise building. Future plans could include a hotel and almost a quarter of the 3.1-hectare (7.5-acre) site would become parks and green space, with a boardwalk linking to Rocky Point Park.

In sending the bylaw amendment to a public hearing, Port Moody council unanimously rejected a staff recommendation to scale back the number of residential units from 3,397 to 3,000. That would make it the densest major development either built or planned for the city, according to a report prepared for council by Eric Vance, Port Moody’s acting general manager for development services.

Vance said such high density isn’t in line with the city’s policy to concentrate its growth in specially designated transit-oriented development (TOD) areas. The Flavelle site is just west and north of the Moody Centre TOD area that runs between Moody and Spring streets, and between the SkyTrain tracks and St. Johns.

But Coun. Meghan Lahti said that’s close enough for her. “It has to be walkable to transit, and I think this is definitely walkable," she said.

Coun. Diana Dilworth said Flavelle’s proposal for the site has the potential to become the city’s “signature development.”

In fact, earlier in the evening council heard several presentations from residents and proponents praising the plan. They said it will create more housing choices for people who want to stay in the city or move to Port Moody.

Mike Hind, president of the Tri-Cities Chamber of Commerce, said excising some of the density could come at the expense of the project’s commercial and light industrial opportunities to create jobs, especially in the high-tech sector he believes would be attracted to the site.

“This promotes the highest and best use of the land,” Hind told council.

Bruce Gibson, the vice-president of real estate asset management for Flavelle’s parent company, AP Group, said he’s encouraged by the support for the project from the public and councillors.

“The success relies on the community wanting it to happen,” he told The Tri-City News. “This allows us to move forward with confidence.”

If the bylaw amendment to the OCP is approved, the development proposal would then have to go to Metro Vancouver for its assent to change the property’s designation from industrial to mixed-use. A previous attempt by the city in 2014 to change Flavelle's designation was rejected by the Metro board because there wasn’t a development plan in place compelling enough for it to give up industrial land.

“This is a really big project,” he said. “It’s exciting.”