Fin Donnelly's candidacy comes as speculation heats up around the possibility of an early provincial election.
Sep 15, 2020 9:04 PM By: Stefan Labbé 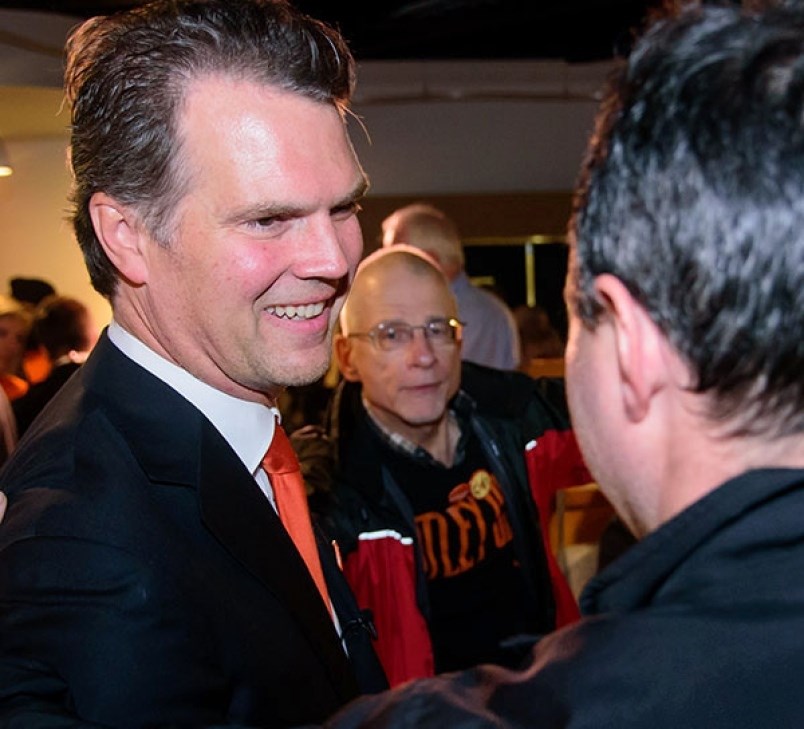 Then-MP Fin Donnelly on election night, Oct. 19, 2015. Donnelly was proclaimed the BC NDP candidate for Coquitlam-Burke Mountain Monday evening, Sept. 14, after no other candidates sought to contest his bid.MARIO BARTEL/THE TRI-CITY NEWS

A longtime Coquitlam councillor and local MP has been proclaimed the official NDP candidate for the provincial riding of Coquitlam-Burke Mountain, a seat currently held by BC Liberal MLA Joan Isaacs.

Fin Donnelly had served as an elected official for 17 years, seven as a Coquitlam councillor and another 10 as an MP for the federal riding of Port Moody-Coquitlam and New Westminster-Coquitlam, where he focused much of his work on fisheries and water conservation.

“I want to bring the voice of all those in Coquitlam-Burke Mountain to the legislature,” he told the Tri-City News Tuesday, pointing to a desire to focus on affordability and the environment, while improving access to health care, child care and transportation.

Burke Mountain is a newly developing area in Coquitlam and the demand for new schools has been strong.

Donnelly’s initial bid for the NDP nomination came as a surprise to many two weeks ago after the former NDP minister retired from his role as MP in the lead up to last year’s October federal election.

In a 2019 News profile, Donnelly stated he was changing his focus from working as a politician to working directly with groups trying to protect the Fraser River.

His federal NDP seat was unsuccessfully defended by Coquitlam Coun. Bonita Zarrillo, who lost to now-Conservative MP Nelly Shin in a near three-way split, which would ultimately become the closest race in the country.

Just over a year later, the longtime politician has clearly had a change of heart.

“Businesses have been struggling over the past several months because of COVID, so now is the time to provide a strong, stable recovery and I feel I can contribute to that,” he said.

“It’s always going to seem like you're out of politics until you’re back in,” he added, pointing to the fact that when asked “Are you out?” he would reply, “Never say never.”

Donnelly said he got the news Monday night, Sept. 14, after no other candidates for nomination filed their paperwork before the deadline, joking that it “was tough but I came out on top.”

Coquitlam-Burke Mountain was narrowly taken by Isaacs in the last provincial election, when she defeated the incumbent NDP candidate Jodie Wickens by 87 votes.

Donnelly's candidacy for Coquitlam-Burke Mountain comes as speculation over an upcoming provincial election heats up. Last week, Premier John Horgan discounted the relevance of the power-sharing confidence and supply agreement that he signed with the Green Party following the 2017 election to join forces and defeat the minority BC Liberals. The agreement commits the NDP in several ways to avoid an early election call.

On Monday, Horgan evaded questions from reporters around the possibility of a snap election in September but reiterated the idea that much has changed since the agreement was signed.

Meanwhile, Sonia Furstenau was named leader of the BC Greens Monday and joins fellow Green MLA Adam Olsen in the legislature, though together one member short of 2017 when the party under Andrew Weaver signed the power-sharing agreement.

After taking the reigns of the Greens, Furstenau told several media outlets an early election would be a mistake and what British Columbians need during the ongoing pandemic is a government focused on governing.

But Horgan has kept the possibility of an election open.

“We did not think that a global pandemic was something we would have to consider,” said Horgan Monday. “The situation today is not the situation last year, or, certainly, not 2017.”

Donnelly echoed that message, adding that no matter when an election is called, it will likely occur during the pandemic and the government in power needs to be ready to pull the province out of crisis.

“The next big issue that’s on the doorstep is the recovery,” he said.

— With files from Cindy E. Harnett, Diane Strandberg and the Canadian Press