'We don’t want to go back to where we were in wave one when everything had to be shut down,' said Fraser Health’s chief medical health officer.
Oct 28, 2020 9:28 AM By: Stefan Labbé 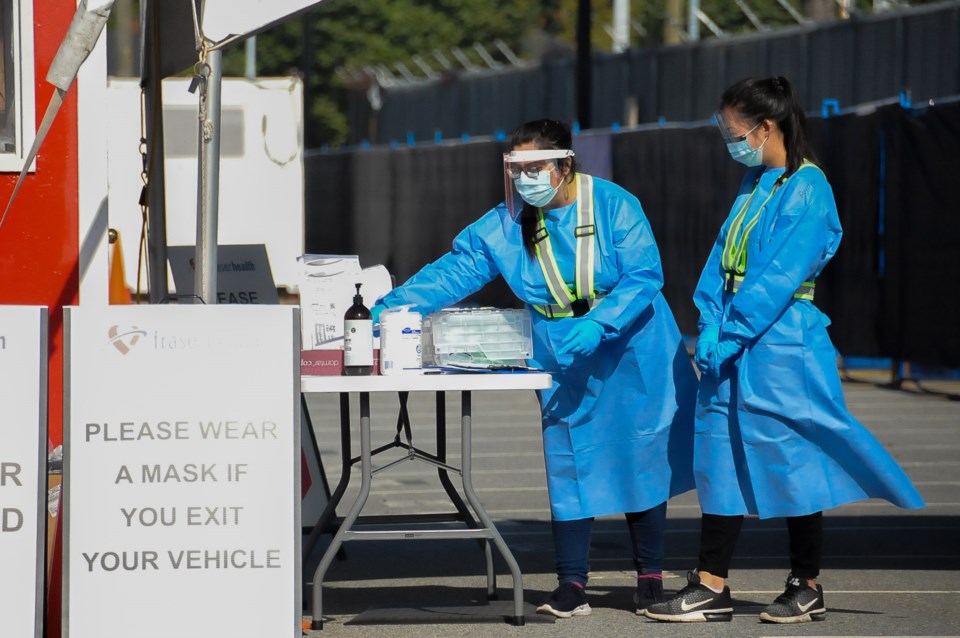 Health officials are appealing to the public to avoid parties as COVID-19 caseloads surge across the region, triggering a cluster at a Port Coquitlam yoga studio, public exposures at two restaurants in Port Moody and exposures in at least 10 schools across the Tri-Cities in the last week.

On Monday, Provincial Health Officer Dr. Bonnie Henry introduced a new order limiting social gatherings in private residences to the household, plus its “safe six” bubble. The order will affect all upcoming celebrations, including Diwali, Hanukkah and Christmas.

“We have no plans to cancel Halloween,” she clarified, adding it’s fine to take children trick-or-treating so long as social distancing and hand hygiene are adhered to. “But we don’t want to see Halloween parties in private residences.”

“We don’t want to go back to where we were in wave one when everything had to be shut down.”

By Monday, Fraser Health — with 1,784 active cases representing 77.8% of the provincial total  —  had an 8.3% positivity rate equal to Bismarck, N.D., the U.S. state with the highest per-capita caseload in the country right now.

The recent surge in cases has put massive pressure on contact tracers in a region where high population density and more multi-generational homes have contributed to growing transmission rates.

Even as the health authority says it has moved to hire hundreds of new staff, Brodkin said it has been cancelling or delaying flu vaccine appointments at public health clinics so it can shift staff into COVID-19 contact tracing roles. Brodkin added flu vaccination would likely continue into November without a cause for concern and that nobody would be left behind.

In the last week, Fraser Health has released public exposure notifications for two Port Moody restaurants, one for a wedding party at Saint St. Grill on Oct. 10 and another at Atrack Restaurant on Oct. 11 and Oct. 16 through 20.

Fraser Health lists public exposures when contact tracers can't track down everyone at an exposure event. Anyone at these locations during the specified times is urged to monitor for symptoms, and if present, to get tested and self-isolate.

A Port Coquitlam yoga studio will also close its doors for two weeks after multiple positive cases of COVID-19 were identified across five classes.

Port Coquitlam’s Oxygen Yoga and Fitness has been shut since Oct. 20, when two members notified staff they had tested positive for the virus.

The studio immediately began pouring over its class lists calling and emailing anyone they thought may have been exposed to the initial cases, said Melissa Hanssens, chief operating officers of yoga and fitness centre’s 78 franchises.

“Right now we’re looking at less than 10 cases across five classes,” she said.

Hanssens said the studio had complied with all health and safety guidelines and shut voluntarily out of caution until Nov. 4, the end of the two week incubation period.

However, upon reopening, the studio said it will be implementing additional safety protocols, including removing two spots from each class to increase physical distancing and an "everywhere but on the mats" mask policy.

The plan comes as Henry said it's now "the expectation" that everyone across B.C. wears a non-medical mask in indoor public places.

On Saturday, Oct. 24, Hanssens said Fraser Health received a full list of the studio’s classes and will conduct its own investigation.

“We’re waiting for some exact numbers from Fraser Health,” she said.

The Tri-City News has learned that one of the studio’s members brought the virus back to her Coquitlam home, infecting a family member and two other friends.

The family member, who spoke on condition of anonymity to avoid blowback, said he’s riding out the virus at home as the symptoms come in waves.

“I feel like a got run over by a truck,” he said over the weekend, adding on Monday, “I’m just starting.”

The infected man said a Fraser Health contact tracer first followed up with him on Monday, more than a week after the initial exposure event was discovered.

“It’s too late,” he said. “To call you eight days later for contact tracing? I’m not blaming Fraser Health but they’re swamped.”

Fraser Health’s Brodkin told the Tri-City News that contact tracers aim to follow up on cases within 24 hours of the time they receive a lab-confirmed report.

“We obviously are concerned when we hear that a case or a contact has not been followed up in a timely way,” she said. “It’s one of the reasons we are going out to the community and saying additional actions need to be taken to bend this curve back down again.”