Have your say on the Coquitlam Crunch south extension

Coquitlam residents have until March 11 to answer a series of questions about the Crunch via an online survey.
Feb 21, 2021 7:29 PM By: Janis Cleugh 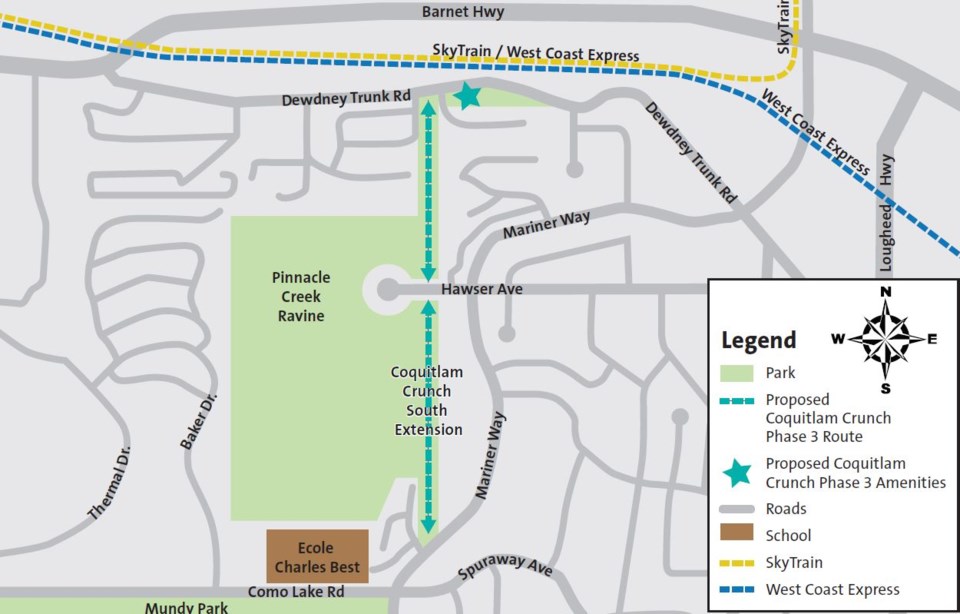 A map of the proposed Coquitlam Crunch South Extension.CITY OF COQUITLAM

Do you hike up the Coquitlam Crunch? If so, how often and why?

Those are some of the questions being asked of residents as the city proposes its next phase of the popular trail: the southern section up to Mundy Park.

Coquitlam residents have until March 11 to answer a series of questions about the Crunch via an online survey: https://letstalkcoquitlam.ca/crunch/survey_tools/crunchsurvey.

Named the Coquitlam Crunch South Extension, the $3.25-million gravel route will link Dewdney Trunk Road with Mariner Way when constructed in 2022; it will also include some stairs in steeper areas of the BC Hydro right-of-way.

Already, plans are being made for a parking lot at the base of the slope as well as washrooms; however, municipal staff are also reaching out for ideas about other amenities such as water fountains and street crossings. As well, poll respondents are asked to rank the importance of trail maintenance and sight lines.

Last fall, city council bumped up “Phase 3” of the Coquitlam Crunch project due to demand along the 2.2-km northern trail, which runs along the BC Hydro right-of-way from Eagle Ridge Park to the Westwood Plateau neighbourhood — rising 240 metres.

About 50,000 hikers travel the Crunch every month in the summer.

Next month, city crews will double and pave the Lansdowne parking lot and install electronic signs to accommodate Crunch hikers arriving by vehicle.

The northern and southern sections will be connected by future highway and rail crossings at Falcon Drive; it’s anticipated the Crunch will eventually run from the Fraser River to Eagle Mountain Park.

Email parksandconsultation@coquitlam.ca for more details about the Coquitlam Crunch expansion.

Coquitlam Crunch challenge cancelled but beer still in the mix for ‘low-key’ hikers
Sep 5, 2020 7:22 AM
Comments