He came from Iran to study, but discovered a love of football

Terry Fox secondary student Ali Afrazi joined the top-ranked Ravens this year to get the most out of his Canadian adventure, but discovered a new passion along the way.
Nov 15, 2016 2:48 PM By: Sarah Payne 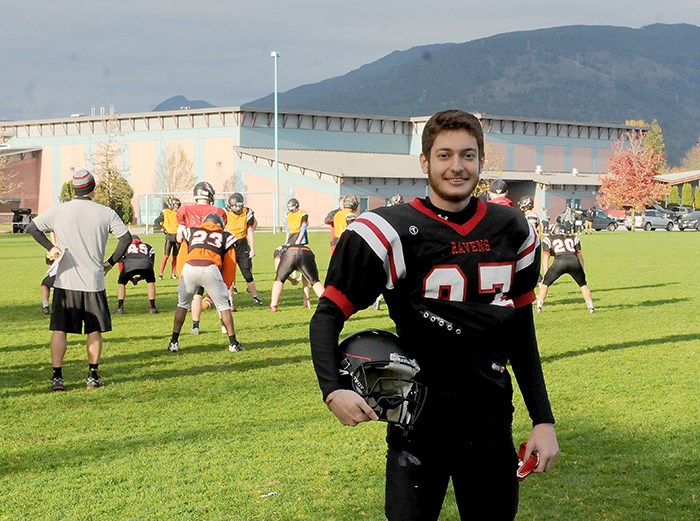 Ali Afrazi, an international student from Iran, discovered a love of American football after joining the Terry Fox secondary Ravens.

It would be easy for a 17-year-old who is attending a new school, in a new country while learning a new language to retreat into the shadows and simply survive on the sidelines until graduation day.

But Ali Afrazi is not one of those students.

The lanky kid from Rasht, Iran, a small town sandwiched between mountains and the Caspian Sea, arrived in Port Coquitlam in December 2015 to attend Terry Fox secondary.

"The weather is like here — rainy," Afrazi said of his hometown. "Everything else is really different. The culture, how you communicate with people, how you socialize."

Without family or friends here, he quickly recognized he needed to get involved if he wanted to connect with others in his new country.

"The international students usually stick together… but I found it really useful to improve my English, to find friends… to go out there and experience different things."

Afrazi looked around and noticed sports are an important part of the Canadian high school experience. He'd played soccer and basketball back in Iran but American football — now that was something new he could try.

"When I told my friends I want to join the football team, they said, 'No, don't, it's too dangerous.' But I said I want to experience, I want to try everything," Afrazi said.

So in September, he showed up to the football field not knowing the difference between a wide receiver and a quarterback, a scrimmage and a sack.

"At first, I thought I can't get along with the players so well," he said — the rest of the team had been attending school and playing football together for years, and Afrazi was an outsider in more ways than one.

"But they treat me like family. I didn't know the meaning of the [play] board and all of them, they become like a teacher for me. They are my brothers."

Coach Martin McDonnell has been shepherding the Terry Fox Ravens for the past 20 years and proudly notes the team is ranked Number 1 in the province and nationally.

"We've been pretty successful," McDonnell said. "And we don't cut kids. The more the merrier."

Even so, many players have worked their way up the ranks from the time they enter Grade 9, and most have grown up with some understanding of how football is played.

"We don't get a lot of brand new Canadians coming out," McDonnell said, adding the sport also tends to attract players who bring a certain physical presence to the field. "Ali's not a big kid, he's a bit slight in stature."

What Afrazi lacked in size, football terminology and experience, he made up for in dedication.

"He's out there at every practice, learning something new," McDonnell said, adding, "You have to earn your spot" to get time on the field during a game.

For Afrazi, a running back, that moment came during an early October game in which the Ravens were pummelling Abbotsford's W.J. Mouat secondary 57-0.

"His first game, he got a hand-off and ran with it," McDonnell said. "He cracked off a 20-yard run. Since then, we're trying to get him in more."

Afrazi sent a video clip to his parents in Iran, who were initially alarmed until he explained the run was a good thing, that it was how to score a touchdown.

"It was the first time I heard my name announced in a stadium," Afrazi recalled with a smile. "It felt so great."

Afrazi will be at Fox until the end of this year before transferring to Douglas College; he hopes to obtain his Canadian citizenship and then study business at Simon Fraser University — and, with any luck, join the football team.

Until then, Afrazi says the experience at Fox has taught him not only about the intricacies of a sport but also about focus, determination, staying strong and never giving up.

"I am sure this is going to be one of the great pages in my life story," Afrazi said. "One that I will always remember."