Among the changes, all patrons must now be seated at a designated seat, no one is permitted to serve themselves liquor and dance floors are now off limits.
Jul 22, 2020 3:46 PM By: Stefan Labbé 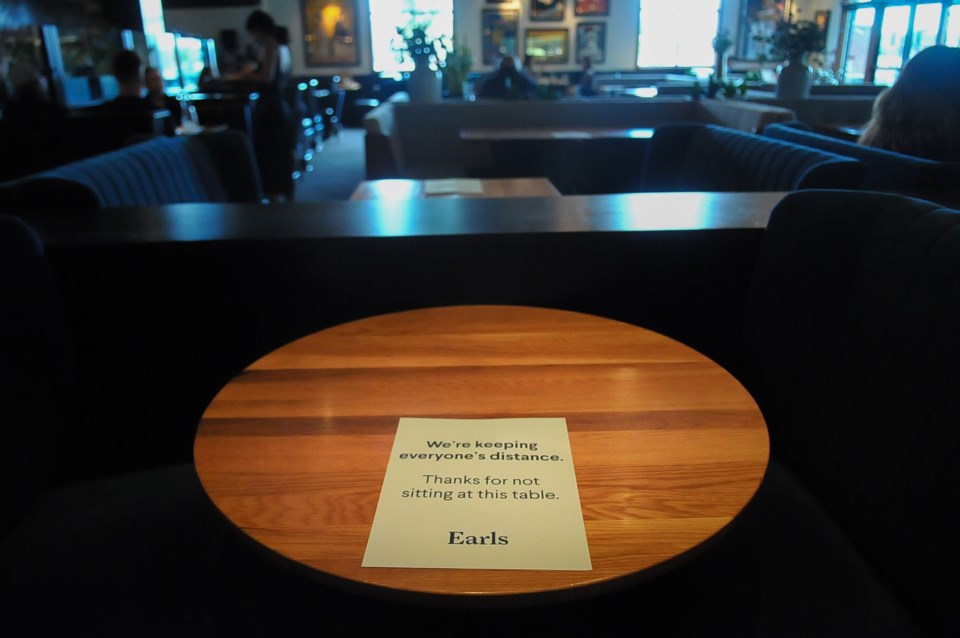 After a spike in cases associated with bars and restaurants — including at least two in the Tri-Cities — health officials have amended a provincial health order to place further restrictions on establishments to stem transmission of the coronavirus.

Among the changes, all patrons must now be seated at a designated seat, no one is permitted to serve themselves liquor (no ordering from the bar) and dance floors are now off-limits.

“Changes in the requirements for ‘events,’ as we call them, have also been made to further reduce the potential of transmission in these higher-risk environments,” said Henry, later pointing to things like physical barriers for karaoke.

Details of the amended order will be released shortly, added Henry.

The changes come on another double-digit jump in cases across the province, with another 34 new cases flagged as COVID-19 positive.

Over 70 cases are now linked to the Kelowna community exposure event on Canada Day weekend. Of those, further exposures have been traced to more than 1,000 people across the province from every health authority. They are all said to be in isolation.

Several staff at the Earl’s in Port Coquitlam and one at Brown’s Socialhouse in Port Moody have been put into isolation after they tested positive for the virus. And while it’s not clear just how many patrons may have been exposed in the two cases, such exposures come as no surprise to health experts.

“Those sort of settings are concerning because generally, a person is there for a prolonged period of time. It’s not like going to the grocery store and then you’re gone,” Dr. Stephen Hoption Cann, an epidemiologist at UBC’s the School of Public Health.

Hoption Cann said that while the two-metre, or six-feet, rule-of-thumb can work in certain settings, it’s usefulness goes out the window when you’re in a poorly ventilated indoor setting for prolonged periods of time. The bigger the indoor space and the more the ventilation, the better.

And once a cluster breaks out, restaurants and bars present a big challenge to contact tracers, with so many people unknown to each other in one location.

“If you went to a restaurant or bar a couple of nights back, how do you trace all of those people?” said Hoption Cann of the outbreaks at the two Tri-Cities restaurants. “We’ve seen big surges in Florida and Texas [where] they were opening these places up.”

One solution in B.C., as well as other jurisdictions, has been to have staff take down names and phone numbers of patrons, and Dr. Henry renewed a call for British Columbians to do so.

“It’s in our best interest to give the restaurant our name and phone number so that if there was somebody there who was sick, then we can be contacted quickly,” she said. “For the next incubation period, we need to rapidly find people.”

But finding contacts within the first 24 to 48 hours has been getting more difficult of late, said Henry; whereas, earlier in the pandemic people’s contacts were dropped to often three people, now that number is creeping back up into the 30s.

Henry also implored British Columbians to follow existing rules at restaurants and bars, and to avoid asking to be seated with more than six to a table and “no table-hopping.”

The COVID-19 safety plans are in place for a reason, she said: to keep you safe.

“We are not going to go back to things we did earlier this year,” she said, pointing to questions of a future lockdown.

“Now’s our time to make sure we continue to benefit from those practises.”