Here's what TransLink plans for snow this winter

From enhanced communication and track de-icing to 'socks' for tires, TransLink rolls out its transit strategy to cope with ice, snow
Dec 2, 2019 3:01 PM By: Diane Strandberg 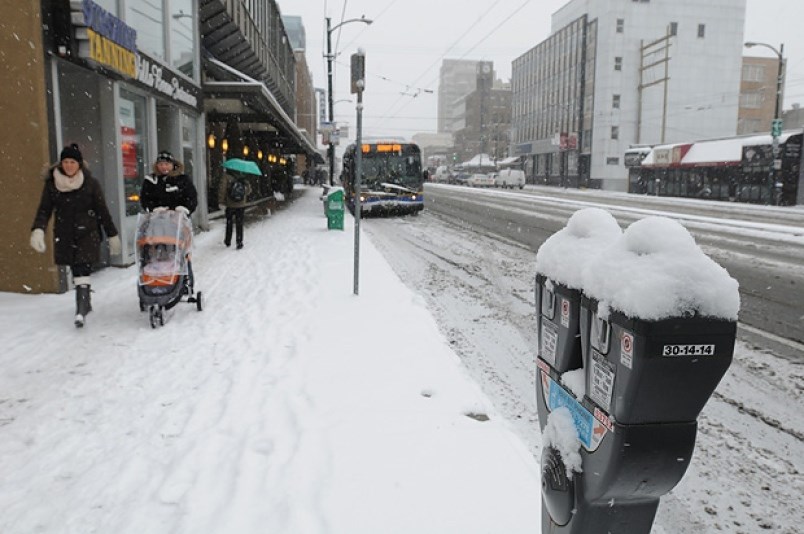 This is what we faced last February. Now TransLink is laying out its plans for this winter.Dan Toulgoet

The Lower Mainland may have mostly avoided snow on the weekend as temperatures rose slightly and the rain returned.

But TransLink is planning for the winter and has announced its strategy for keeping transit rolling and customers informed of any delays in case of inclement weather.

According to a TransLink press release, buses will be outfitted with special “socks” to help them with traction in slushy conditions; de-icing trains will be used to keep SkyTrain moving; and problem trees that may drop branches near or on tracks are being removed.

Those are just a few of the measures being put in place for the winter.

Communicating problems is one of the biggest issues and TransLink says it has new electronic display screens and touchscreen transit kiosks to keep customers informed of delays or weather events. And for seniors and people with mobility issues, a number of initiatives will be introduced to make HandyDart run more smoothly. For example, customers who can be difficult to access during winter are being contacted early to discuss a clearing plan and more effort will be made to let day programs and health partners know of any service disruptions.

According to the TransLink release, here's what the regional transportation authority has planned to keep commuters moving during inclement weather this year.

• Station upgrades: Electronic display screens and speakers have been installed and upgraded at many station locations, providing customers with crucial information during delays or weather events.

• Millennium Line coupling: During heavy snowfall, trains on the Millennium Line — which includes the Evergreen Extension to Port Moody and Coquitlam — will be coupled together (making four-car trains) to maximize capacity while SkyTrain attendants monitor guideways.

• SkyTrain guideway monitoring: SkyTrain attendants will be positioned at the front of trains during heavy snowfall.

• Canada Line heat tracing: Heat tracing has been installed on the power rail in sections where heavy ice buildup has previously resulted in service disruptions.

• SkyTrain de-icing: De-icer trains will keep power rails free of ice. During times of overnight snow, some trains will run throughout the night to keep tracks clear.

• Tree and branch removal: Problem trees and branches situated within 10 metres of SkyTrain tracks are being removed.

• Snow desk: There will be a designated "snow desk" in the Transit Communications Centre to monitor bus routes and road conditions.

• Snow monitoring: Contractors that plow and shovel at bus loops/exchanges and SkyTrain stations will be encouraged to upload photos for verification of snow conditions.

• Switch-outs: Articulated buses can be switched for conventional buses, which carry fewer passengers but have better traction in snow, especially on hills.

•Road condition checks: A formal process has been implemented to assess road conditions for customer pickup.

• Partner communication strategy: If service disruptions or schedule changes occur, there’s now a strategy in place to notify day programs and health partners of these changes.

• Targeting difficult locations: Customers who can be difficult to access during winter are being contacted early to discuss a clearing plan.