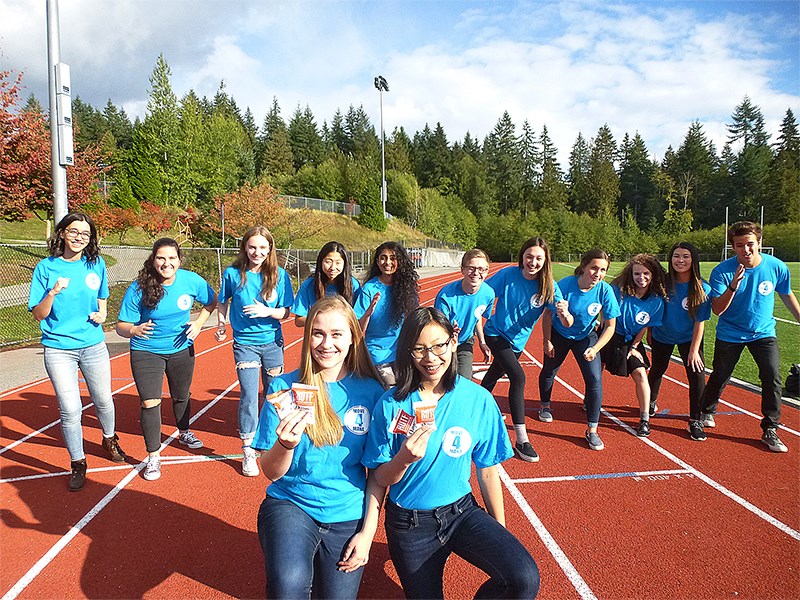 Heritage Woods secondary school’s Move4MANA team, including Katie Sew and Adrienne Clayton, are gearing up for a month of physical fitness in a project that will see the school’s 1,400 students burn calories so that thousands of packages of ready-to-use therapeutic food, called Mother Administered Nutritive Aid (MANA), are donated to feed African children suffering from severe acute malnutrition. Sew and Clayton recently visited the factory where MANA is made and hope the project will spread to other schools in the province and North America.Diane Strandberg
Heritage Woods secondary school is helping to eradicate world hunger 500 calories at a time.

On Monday, the Port Moody school’s 1,400 students embarked on a 30-day Move4MANA challenge to be physically active with the goal of sending a package of ready-to-use therapeutic food, Mother Administered Nutritive Aid (MANA), to Africa for every 500 calories burned.

“You have the opportunity to save lives, why wouldn’t you?” asked student Adrienne Clayton, who is helping to organize the project with 12 of her peers.

Move4MANA is a partnership between MANA Nutrition, which produces the peanut-butter-based substance; Langley-based Food for Famine Society which is donating the MANA packages; and World Vision Canada, which will be distributing them to families in war-torn Somalia.

It’s a project that came out of a youth philanthropy initiative, called YIP, that students in the school participated in last spring.

One of the judges, Maria Martini from Food For Famine, was so impressed with HWSS’ students charitable efforts that she proposed the idea and the students took it from there, said sponsor teacher Marilyn Nunn.

“I’ve been teaching for over 30 years and I’ve never seen such an impactful project,” Nunn told The Tri-City News.

Over the summer, the students produced a video on the project and on Monday, the entire school did exercises and heard from representatives from the Move4MANA partners.

Clayton, who is in Grade 11, and Katie Sew, a Grade 12 student, even got to visit the U.S. state of Georgia, a peanut-growing region where the MANA is produced. They flew there on a private jet with a group of food writers, toured the factory and a peanut farm, and participated in an American Peanut Council dinner.

But the highlight of their two-day trip was meeting former U.S. president Jimmy Carter and his wife Rosalynn, who were gracious and enthusiastic about their project.

“H was very nice,” said Sew, who recalls chatting with the former first family’s governess, who regaled them with stories about the Carter family.

Over the short visit the girls learned a lot about peanuts — which are actually a plant of the pea family and grow underground. They also saw the fortified nutritional supplement being made; it looks like a paste and is shipped in a plastic packet.

The fact that MANA can save the life of a child suffering from severe acute malnutrition is what has the girls excited.

“Together we can save so many lives,” said Clayton.

Her friend noted that the hope is that other schools across Canada and the U.S. join in the challenge so that the lives of children in developing countries are saved while students in North America get more physically fit.
MANA Nutrition co-founder Mark Moore said as much in a Huffington Post article about the Port Moody school’s Move4MANA project.

“So they are asking, what if we took our abundance and actually used it to balance the scarcity in another part of the globe? We’ve always known that was a way to motivate people to give dollars. But what about giving something else? What about giving of our energy by getting active?” he wrote.

Noting that HWSS kicked off its challenge on World Food Day, Moore said it’s time North Americans learned to understand that prosperity on one side of the globe is equally matched by poverty on the other.

The students agree and are ready to jump into the Move4MANA campaign, using the Active For Good app to measure their activity.

“I’m hoping to get our school motivated with global community work and get more active,” Sew said.

2118
Search for missing Port Moody woman takes on ‘life of its own’
1646
'It's chaos': Massive search underway for missing Port Moody woman
1595
Everything you need to know about COVID-19 vaccines in B.C.
1356
'Administrative error' leaves some UBC students owing nearly $10,000 in tuition, due within days
982
'Clinically extremely vulnerable': Are you first in line to get vaccinated in B.C.?