Despite their party’s win, Democrats Abroad Canada knows there is more work to do
Jan 20, 2021 9:16 AM By: Cameron Thomson 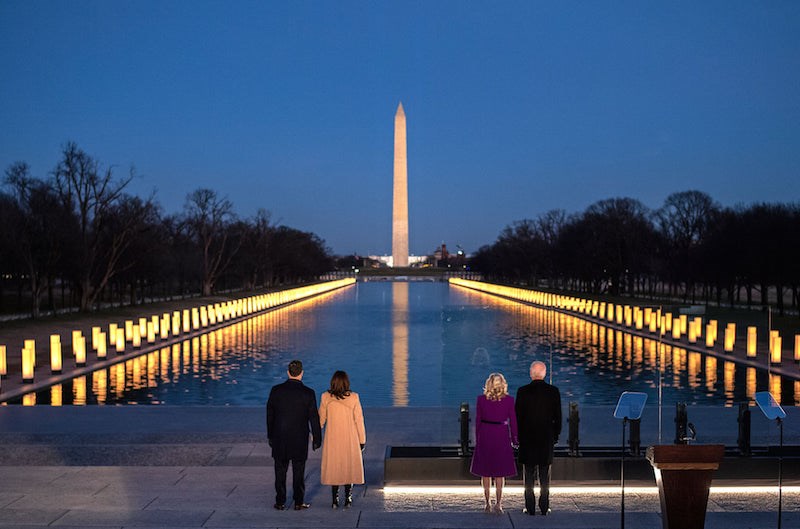 On the eve of the inauguration, Vice President-elect Kamala Harris and the incoming second gentleman Doug Emhoff, left, and President-elect Joe Biden and incoming first lady Jill Biden in pause to reflect in Washington, DC. Photo via Joe Biden/Facebook

Democrats in Vancouver and across Canada have mixed feelings when it comes to President Joe Biden and Vice President Kamala Harris’ inauguration.

Dianna English, communications officer for Democrats Abroad Canada says on one hand the organization's members are eagerly awaiting the new administration’s changes. On the other hand though, members are both sad and angry at what it took to get to this point.

“We're feeling an immense sense of relief that there's going to be a restoration of a progressive agenda,” English said, calling Harris' election a “historic moment” being that she is the first woman, let alone woman of colour, to be elected Vice President of the United States.

Surrounding the Capitol building this Wednesday is a small army composed of National Guard and local law enforcement. This is a product of the attack on the U.S. Capitol building on January 6 carried out by thousands of Trump supporters and reports from the FBI suggesting the same actors might try to disrupt inauguration day.

"I think the security force and presence in DC right now is obviously robust. We're pretty sad that it's necessary but we're grateful and appreciative that the precautions are in place to try and keep the transition of power from suffering additional violence," English said.

English believes there are several reasons for the increase in membership, ranging from the organization’s mobilization and organization efforts as well as a sense of imperative from news coming from our southern neighbours.

“I think Americans living in Canada knew this year that the effects of a second Trump term wouldn't stop at the border, that the damage that would be done by a second Trump administration would be global," English said.

Members new and old to the organization will be celebrating the Democrats’ win on Thursday over a Zoom call where members will be thanked for their work in getting the vote out across Canada. According to English, out of the approximately 620,000 Americans living in Canada about 5.3 per cent of them voted in 2016 but that number shot up to well over 80 per cent in 2020.

Despite the victory, Democrats Abroad know the fight goes on with English saying the organization will work to ensure the gains made during the election are kept.

"It's not over. The local elections matter, the midterms will matter. I think this election was decisive but demonstrated that we still have significant work to do and that we can't take it for granted," she said.