How fast is the new RapidBus from Coquitlam to Maple Ridge?

It will now be easier for transit users to travel between the Tri-Cities and Maple Ridge after TransLink launched its new RapidBus service Monday morning.
Jan 6, 2020 1:01 PM By: Gary Mckenna 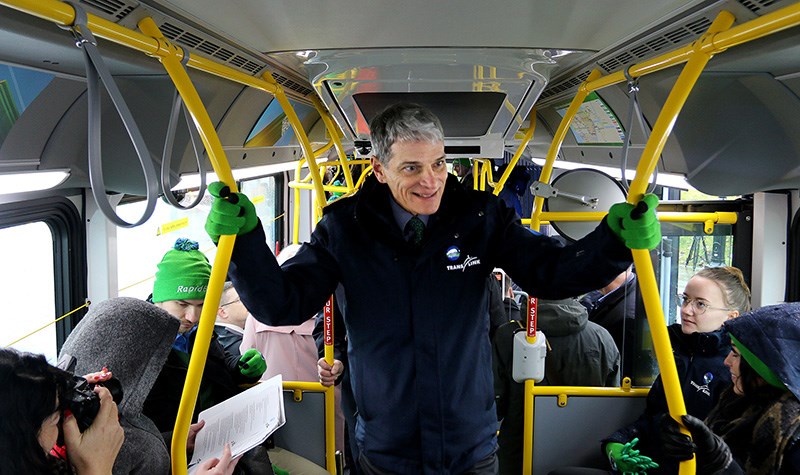 Kevin Desmond, the CEO of TransLink, checks out the new articulated Rapid Bus that began service between Coquitlam Central station and Maple Ridge on Monday.Mario Bartel

It will now be easier for transit users to travel between the Tri-Cities and Maple Ridge after TransLink launched its new RapidBus service Monday morning.

The new R3 route makes it possible to go between Coquitlam Central Station and Maple Ridge in between 30 and 37 minutes, depending on the time of day. Frequency of service has also improved, with buses running every 10 minutes during peak periods and every 15 minutes during non-peak hours.

"The best way to get more people on transit is to offer fast, reliable and frequent service that people can count on," said TransLink CEO Kevin Desmond during a rainy press conference at the Coquitlam Central Station bus loop Monday morning. "RapidBus is that service."

The R3 is one of four new RapidBus routes launched this week, adding enough capacity across the Lower Mainland to move 10,000 people per hour during peak periods, according to TransLink. Other lines include: the R1 King George Boulevard between Guildford and Newton transit exchange; the R4 along 41st Avenue in Vancouver between UBC and Joyce-Collingwood Station; and the R5 Hastings Street between SFU and Burrard Station. A fifth route on the North Shore is expected to go into service in April.

According to TransLink officials, a combination of fewer stops, all-door boardings and infrastructure improvements are used to speed up the routes. For example, adding a pullout from the Coquitlam bus loop directly on to Barnet Highway means buses do not have to travel up the ramp to Mariner Way to access the highway, saving approximately one minute per trip.

"Every minute counts for our customers," Desmond said.

There are also queue jumps at intersections and dedicated bus lanes for large sections of the routes, making it easier for the 60-foot articulated vehicles to make their way through rush-hour traffic. All of the stops have shelters with digital signage that lets riders know when the next bus is coming.

While the routes began operating Monday, more infrastructure improvements are expected in the future to decrease travel times.

"It is not just the pretty green and blue buses but making the buses faster on the right of way," Desmond said. "We have lot more work to do on that and this Mayor's Council is up for that."

This is just the beginning for RapidBus in Metro Vancouver, Desmond said, noting that seven more routes are included in the TransLink Mayors' Vision for transportation in the region. But he said more funding will be required if the service is going to be expanded further.

"It is going to take some more support from the federal and the provincial governments but I know we are going to get there," he said.