How many Tri-City residents are on Airbnb?

Dozens in Port Moody, Coquitlam and Port Coquitlam aiming to take in some extra cash
Apr 6, 2016 9:29 AM By: Gary Mckenna 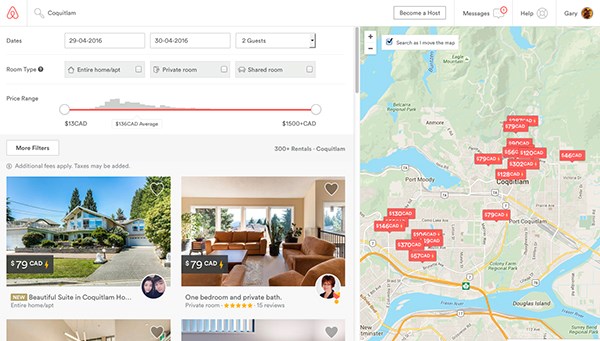 A brief search of airbnb.com by The Tri-City News found 82 listings in Coquitlam, 34 in Port Moody, 17 in Port Coquitlam and three in Anmore — a total of 136.Submitted Photo

Need a place to stay for a night or two in the Tri-Cities?

How about a nice clean suite with a pool and hot tub in Coquitlam’s City Centre for $57 per night?

Or a spacious 1,000 sq. ft. suite with access to a small private putting green in Ranch Park for $80 per night?

These places and more are available through popular accommodation rental website Airbnb — but there’s a catch: They may not be legal.

“If they are operating a licensed bed and breakfast, that would be fine,” said Jim McIntyre, Coquitlam’s director of development services. “If they weren’t, they would be running afoul of the zoning bylaw.”

In Coquitlam, licences are required for anyone operating a bed and breakfast and regulations stipulate that the home in question must also be occupied by an owner and cannot be used solely for vacation rentals in a residential area. As well, many strata complexes’ bylaws do not allow short-term rentals.

That means full apartment rentals, of which a handful are listed on the Airbnb website, contravene municipal bylaws.

NOT ALL AIRBNB ACCOMMODATIONS LEGAL

The overall number is up from last year, according to Karen Sawatzky, a Simon Fraser University Urban Studies masters student who is writing her thesis on Airbnb’s impact on the residential rental market. Her data shows that in January 2015, there were approximately 53 listings in Coquitlam while Port Moody was at 35 and PoCo 14 for a Tri-City total of 102.

While Coquitlam does not have the kinds of listing figures seen in other municipalities — for example, Vancouver had more than 3,400 as of June 2015 — McIntyre said it is an issue that the city will have to get ahead of.

With the Evergreen Line beginning operations next year, he said, it is likely the number of residents looking to use Airbnb to make some extra money will not be falling.

It could mean re-thinking and updating regulations that have not changed in decades, McIntyre said, noting the issue is similar to the debate around the ride-hailing app Uber.

“Times are changing,” he said. “Do people want to have that freedom or flexibility? Now could be the time to have that debate.”

But until regulations change, many short-term rentals will remain in violation of city bylaws.

PoCo, for example, has not issued a single bed and breakfast permit, which means the 17 listings currently on Airbnb likely contravene municipal regulations.

“Enforcement of these provisions is complaint-driven,” said PoCo’s manager of bylaw services, Dan Scoones. “To date, the bylaw division has not received any complaints about illegal transient accommodation uses. An inquiry or two, yes, but no actual complaints.”

And not all Airbnb listings are unlicensed.

In Port Moody, Robyn MacLeod, the manager of building, bylaws and licensing, said the city has issued many bed and breakfast licences to residents who are likely advertising on Airbnb.

“Airbnb is just a website,” she said. “Whether it is operated as a bed and breakfast or a complete unit, Airbnb is just another website to advertise your listings. It’s like Craigslist.”

But there are some differences between sites like Craigslist and VRBO, according to Sawatzky.

She notes that Airbnb has made posting a listing easier and has gone to lengths to train hosts how to serve their customers better. Perhaps more importantly, the company has brought rural short-term vacation rentals to the urban environment, she said.

“Airbnb started out as more of a ‘share my living room’ sort of thing,” Sawatzky said. “Of course, it isn’t like that anymore. It has urbanized vacation rentals.”

Her research has found that the proliferation of Airbnb listings in Vancouver has had some unintended consequences, particularly in the residential rental markets. Some homeowners believe they can make more money with short-term rentals, she said, while people looking for long-term housing have to compete with vacationers.

She added that if there are 133 listings on Airbnb in the Tri-Cities, that means there are fewer suites and accommodations available for long-term residents, driving up the overall cost of housing.

“There is a fairly critical shortage of affordable housing and housing options,” she said. “Housing is so crucial. It is a necessity. Tourist accommodations are not a life necessity.”