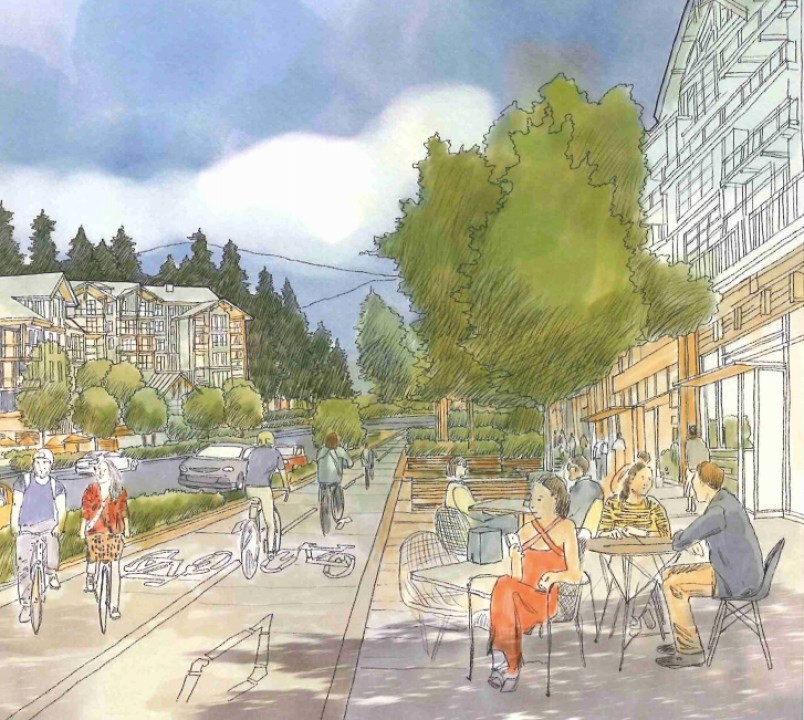 An artist's rendering of what this Burrard Commons project might have looked like. The Anmore development proposal has now been put on hold.Burrard Commons

A large development planned for the Anmore portion of the Ioco lands has been paused before public consultation could get started.

The village of Anmore learned this week that Burrard Commons, a proposed development that would have brought 1,200 homes and shops — and a sewer system — to the rural community, has been put on hold.

In a Facebook post, Mayor John McEwen stated Gilic Developments Inc. has decided to pull back on the project that was in the midst of an extensive public engagement process.

“Gilic let us know that they have internally restructured and are doing a deeper analysis of the property and will not be proceeding with the proposed development of the Ioco lands project at this time. They have not provided any timing for this review,” McEwen said in his post.

Later, McEwen told The Tri-City News there have been some personnel changes with the company requiring a second look at the project, and while it’s not known if and when it will be resumed, the news comes more as a shock than a disappointment.

Plans were in the works for an extensive public consultation process, which now won’t be going ahead. McEwen said he was looking forward to hearing what people had to say about the plans and he was sure comments would have had an impact on the project, which could have housed 4,200 people.

With Burrard Commons on hold, the mayor is looking for other opportunities for the community.

“One of the things we are certainly in need of is diversity in housing here as well as diversity of taxpayers,” he said, noting that some small businesses were excited about the prospect of retail space, including possibly a coffee shop and a grocery store, which would have meant people wouldn’t have to drive so far to get provisions.

Meanwhile, Port Moody's mayor has expressed relief at news that the project has been put on hold.

In an email to The Tri-City News, Rob Vagramov said: “Like with any urban sprawl construction, nearly tripling Anmore's population so far from transit would have had massive implications for Port Moody, even without mentioning the clearcutting of beautiful second-growth forest that would have been required for construction.

"This news relieves a great deal anxiety for many folks living in Port Moody, Anmore and Belcarra associated with this proposed urban sprawl build," he said.

Port Moody recently passed an amendment to the city’s official plan to limit development on the Port Moody portion of the Ioco lands to existing single-family zoning.