For the first part of August each year, Bruce and Elaine Kowallison load up their 1947 Dodge half-tonne pick-up truck and 1973 Boler trailer and hit the road.

It’s the time of year the Port Coquitlam couple love the most: Cruising in their collector vehicles, stopping at show ’n’ shines and meeting fellow gear heads from around North America.

They start in Coombs, on Vancouver Island, for the annual Blast from the Past before motoring to Parksville for the Van Isle Shriners show. Next up is the Comox Nautical Days Vintage Car Show, then Sechelt for the Coasters Car Club Sleepy Hollow Rod Run.

But their fifth — and favourite — display happens this weekend when the Kowallisons drive the streets of their hometown.

As they have for the past five years, they’ll be kicking off Sunday's Downtown PoCo Car Show with the car cruise the night before.

As the show’s car cruise and vendor co-ordinator, Bruce Kowallison looks forward to seeing what polished wheels will be rolling in Saturday night’s 90-minute procession.

And he’s eager to find out how many more spectators it will draw to downtown PoCo. “Every year, it gets bigger,” he said. “People bring out their lawn chairs and kids. It’s great family entertainment.”

Some 250 custom and classic vehicles — including the Blues Brothers’ replica car — are in the sixth annual parade, which winds from Leigh Square to Citadel Heights and up to the northside starting at 6 p.m. Saturday

At 2 p.m., though, Kowallison and about two dozen other drivers will head over to Hawthorne Seniors Care Community to give residents there a mini show. “Their faces just light up when they see the cars all in a row,” Bruce Kowallison said. “They have lots of stories… It brings back a lot of memories.”

Bruce Kowallison’s passion for vehicles goes back to his childhood, when he grew up watching the cars race on the Westwood Motorsport Park on what is now Westwood Plateau.

When the 1973 movie American Graffiti came out, Bruce Kowallison was hooked.

He bought older cars because he liked their bodies better than the newer models, and he tinkered on them with his buddies and joined clubs around the Lower Mainland to meet other car enthusiasts.

Over the years, Bruce Kowallison gained many connections and had vehicles rebuilt. “I did the finishing touches,” he said, pointing to the flames on his Dodge pick-up.

Since he bought it from a friend in 1983, the truck has travelled some distance: Vancouver Island, Washington State and Alberta. The couple replaced the Boler trailer in 2010 and, the next year, they added a 1951 Chevrolet panel truck to their collection.

“I love driving and I love cruising,” Bruce Kowallison said, noting his retirement will be spent behind the steering wheel.

As for Sunday’s Downtown PoCo Car Show, organized by the PoCo Events Society, the eight-year committee member said it gets better with each round. “I love to be involved in it and, judging by the crowd, it’s a great place to check what’s out there and talk to the owners."

The sixth annual Fremont Self Storage PoCo Car Cruise on Saturday starts at 6 p.m. from Leigh Square (see below for the cruise map). And the 15th annual Metro Ford Downtown PoCo Car Show runs from 10 a.m. to 5 p.m. Sunday. 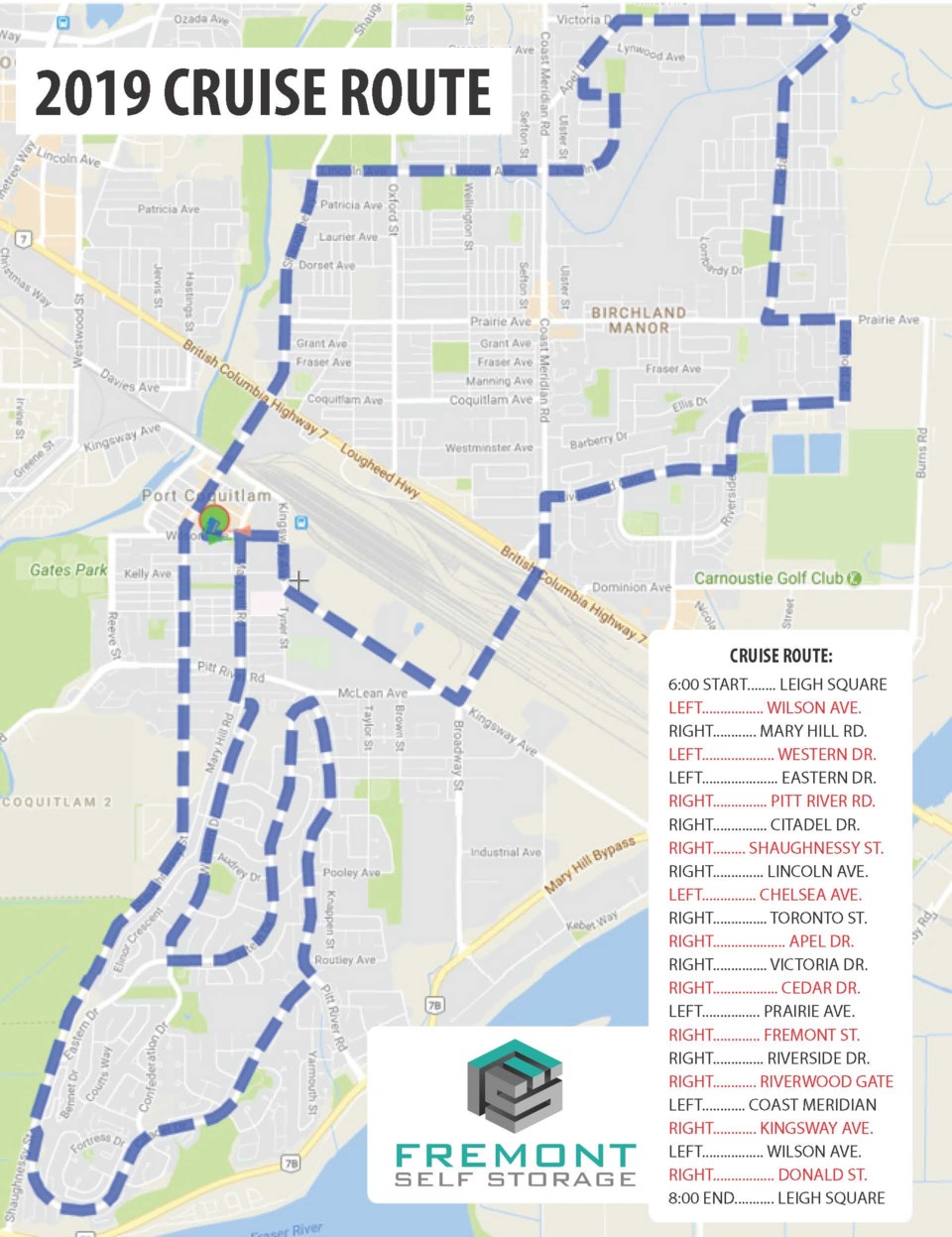